OK…I may very well be being picky here, but I feel like this needs attention. I just bought a few tanks, as I am trying to find that elusive sweet spot, and I have still not ventured into rebuildables etc. I very much wish to do so, not sure why I haven’t tbh.

Anyway, I have noticed now, as I was buying HorizonTech coils for my Arctic (original tank) that there are very subtle differences in the coils themselves which makes HUGE differences in performance. The labling on the coils themselves is slightly different as well, though the packaging is the same. I bought only 3 of them and the guy at the vape shop grabbed from a bin that had individuals (still wrapped) so I am assuming that’s how I got variations.

The coil I used first was imprinted, on the coil itself, “HorizonTech BTDC II” "(Kanthal Wire) .2 Ohm (40-100W) and it performed flawlessly. I was able to use it for about 80mL’s or so, but I had tried one of my own mixes between tanks of my ADV and I felt like the flavor was corrupted. It is still usable and I may have to go back to it until tomorrow. Anyway, unfortunately, I switched to one of the other three coils…

Now…the differences don’t end in the writing. The rectangular intake vents on the side of the “BTDC II” coil are shorter and wider and the round (intake?)holes in the head of the coil are significantly larger, though on a scale of mm’s. The chimney mating point also seems a TEENY bit bigger on the BTDC II and the cotton comes all the way down to the opening, whereas in the BTDC’s it is jammed up inside several mm’s.

Once again the BTDC II was a beast. The BTDC that does not carry HorizonTech’s name on it suck. Or they don’t suck well, actually. <—see what I did there

I am getting dry hits like crazy and the pull is not nearly as airy and strong as with the BTDC II. I guess this rant is a "buyer beware’ as much as anything. I am going to return to my home vape store and try and get a couple more BTDC II’s to replace the crappy ones.

I hope this helps someone who is perhaps, scratching their head, saying “why did this thing hit so nice before and now not so much?”.

I feel like the QC both from manufacturers and retailers just isn’t there yet…so we must police the products ourselves.

It is strange, I agree. I’m sure other manufacturers/companies have the same inconsistencies. Kanger does that as well.

P.S.-With you on the building my own coils. Maybe fear or worry. However, a close friend andthis ELR family are the best teachers I’ve had. So I ordered supplies finally to make that leap. I’ll be watching this thread for feedback myself. Thanks for this.

I bought some coils on ebay a while back…realized they were not “manufacturers” coils and contacted the seller to stop the delivery. We went back and forth a bit and became great pen pals. Turned out he’s one of those guys that gets those huge deliveries of “clone” e-cig parts from China and was making a mint selling coils for $2.00 each on ebay while paying a unit cost of .23 cents each.

There are a lot of badly cloned coils and people will sell bad clones for as long as they get away with it.

ok, so this isn’t an isolated case then. I am going to:

A) go back to Vapor Rocket and get them to swap em out for BTDC II’s. I am honestly not sure if it is just a case of the BTDC II being an overhauled/upgraded version of the BTDC or if HorizonTech’s name being on the one type and not the other makes a difference. They both had HorizonTech on the outer packaging

B)Bite the bullet take the plunge,.and start me some coilin’…see what happens. If I’m not mistaken a few of my tanks have RDA conversion kits or even come with a deck to start working with.

The less I have to rely on people and parts from places I don’t really know, I think the better I’ll feel.

I’ll keep you posted on the big adventure Mr.Sinner…but be warned…probably going to be a lot of cussin’ involved at first

hahaha…good luck @UncleTopher we’re in this together. Cussing is part of the experience!

ok…googled aromamizer and saw the STEAMCRAVE RDTA. That’s exactly what I was thinking of…and I think the TFV4 has a conversion kit with it to turn into something like this, not sure about the Melo2.

thanks guys (and gals)

If you get the aromamizer, you should definitely make this coil for it

it isn’t super low ohms, like the ones you mentions .2 and stuff but man does it put out some great flavor and thick vape its a series dual coil (one wire for both coils instead of two). I just made it up as I went and came up with one last night, been vaping with it all day and love love love it 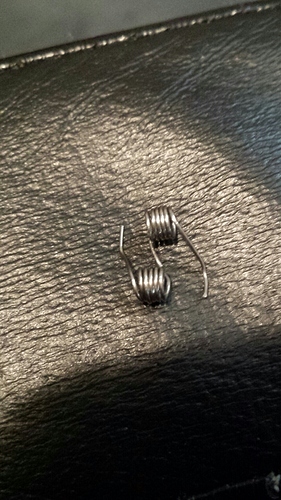 starting to make my own coils was the best thing i did compared to buying premade/factory coils. Today I own 1 tank that takes factory coils,tfv4, and thats sitting in a box upstairs. Every other tank i own has to be built.
£10 worth of wire and £10 for a coil jig and you have enough wire for 200+ coils.
Coil making is all part of it and it’s how I’ve got my best vapes. You can build what you want, how you want and when you get your wicking down, it’s easy for flavour changes and just all round convenient.
The quicker you start to build your own, the more money you’ll save.
Building with different wires has brought flavour’s out of a juice you didn’t know were there.
So go get your shit and start building.

If your going to start building that is the rdta that i would recommend.
So easy to build on and flavour’s awsome. [quote=“UncleTopher, post:6, topic:59253”]
ok…googled aromamizer and saw the STEAMCRAVE RDTA. That’s exactly what I was thinking of.
[/quote]

just saw the review by Robert Ellis and I am sold sold sold. He made it look easy as pie.

As soon as they are back in stock I am going to grab one from the site…the price was 22.95 for the 6mL set up…that’s easily within the low end of my tank price ranges.