Is there any reason that premixing my PG, VG and Nicotine for a mixing session is problematic? For example, if I premix 300ml when I sit down to mix, and make ten 30ml flavors, and just add the well mixed pg, vg and nicotine to my flavors, is that ok? I have found it is easier to just handle the liquid nicotine one time, then make my juices this way. Thoughts?

The only issue is the end result of nic levels. Because if one recpie has 8% flavoring compared to one at 18% the percent of nic will be different.

So don’t worry about that too much. So I comes down to if you are ok with that.

Yep, what @Chrispdx said. Your nicotine levels will vary just a little, but if that doesn’t matter then go for it! I just mixed up a liter of base today! 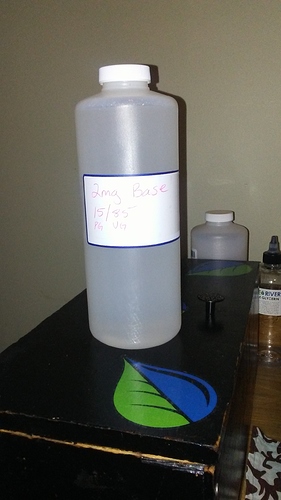 Oh one more thought! Make sure you shake the living hell out of it. Since 300ml is quite a bit bigger than the smaller bottles you’ve been making (captain obvious, I know. Lol) it’ll take more work to get everything blended really well.

For testing small batches of single flavors that should be fine. But, as Chrispdx said, the higher the total flavor % of a recipe is, it could make a difference in not only the nic, but the pg/vg ratio as well.

I’m not to worried about the varying nic levels. I hadn’t thought how that percentage would change. But, it’s not a big problem. Many of the recipes I am using have similar total flavor % , so there isn’t a lot of difference. Thank you!

That makes sense. I am not a stickler about my pg/vg ratio. If it changes slightly, that’s fine!

You can also up the nic level say one percent in the pre mix, that would put you close to levels if mixed separately.