They were hidden, because I don’t feel that they are necessary; you can add a suggestion for single flavor percentage, and you can write a note on the flavor.

Now, there ARE instances where one of the dupes were actually the original, so to speak. Like if someone published a recipe on reddit, for example, and someone inputted it on ELR before the author had the chance to input it, then the author’s recipe would actually be the original and the first one inputted a dupe, but for now the real “original” is hidden.
If you run into some of these, drop me an email or use the feedback form on “My page/favorites” and I will fix those.

This is great…I can’t tell you how annoying it was trawling through single flavour recipes when looking for new ideas or starting points, or just a good recipe!!

Thanks for this ongoing work its much appreciated.

This really is Huge

Thank you, It is Greatly appreciated

That’s a good thing. Thanks for the effort

this will have an affect on the raing system as well right ?

Yes, in most cases ratings were moved over to the remaining public recipe and the score was recalculated.

Nice … ill have to take a look , ,ty for all the work you do

Thank you @daath that DB really needed cleaning… why did people publish single flavour recipes…. Beyond me…

Thanks for all this

did comments move over as well? seems only fair that the thanks and praise go over to the creator of the recipe as well… but it’s probably not as easy to just move everything.

Thanks @daath. Can anyone think of a good example we could check to see what/if moved ? 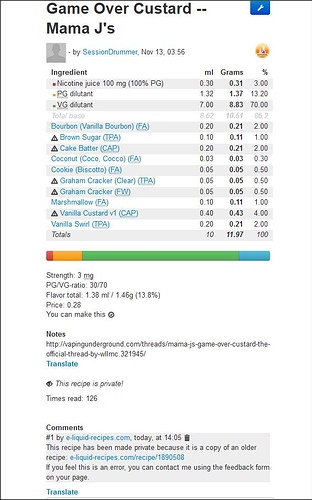 Comments weren’t moved, but ratings and favorites were…

@daath… If we weren’t worlds apart I’d buy you a steak and a beer to show my thanks!

It’s kind of ironic how I would tell folks that single flavor posts aren’t considered ‘recipes’ and I was given shit for saying that!

TZ, I don’t say it enough - Thanks for all the work you do on the flavor stuff - I know you get a lot of shit for it, but I promise you it’s not just me that appreciates it!

LOL…well TY. And for what it’s worth, my esteemed colleagues here have unknowingly helped reinforce the “it is what it is” thought process in me!

Thanks @daath much appreciated

Haha Yep. I found one (forget the name) I was intrigued with and it was 20% Bavarian Cream.