If you’re a man…like me…(debatable - Mrs Pugs) …then you might of come across a somewhat embarrassing situation from time to time when it comes to being a portable Vaper who doesn’t particularly want to carry a ‘handbag’ …What we have are our pockets, and what we put in our pockets can sometimes me misconstrued as being incredibly ‘happy’ to be where you are…be it a supermarket…a local park…or that first meeting with your future in-laws… 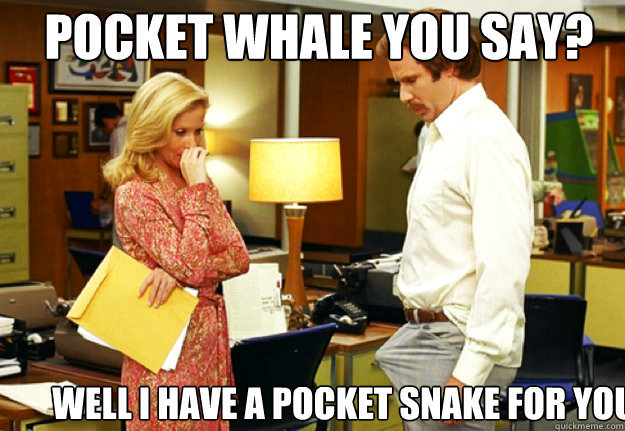 Of course you might be a woman in trousers and in the same scenario, but that would bring a whole different set of questions and raised eyebrows …HOWEVER…it would appear the Vaping industry have our backs covered…or in this case as luck would have it…our fronts…

Greetings once more my fine foggy faction, back once again with another highly interesting albeit practically microscopic vaping device supplied by my good friends at Heavengifts in the guise of Wotofo’s latest pocket snake…
The Serpent Box 50w TC Kit 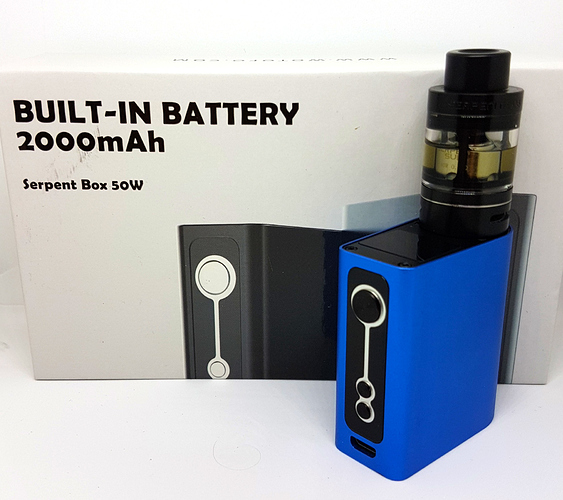 OH DON’T START THIS AGAIN!..yes…it’s tiny …again…and cute…kinda…if you like that sort of thing, but more importantly it’s a 50w TC mod that will fit right in your pocket like it’s hardly even there.

Now, The Serpent Mini 25 RTA is a firm favourite of mine, It’s used daily and has been for months, to me it’s my favourite tank of 2016 and I voted it as such on several occasions, so I was more than a little bit interested when I was offered the Serpent Kit for review…bit confused as to why this is called the Serpent Box Kit, with a tank that’s smaller than the Mini…surely this should be called the nano, or micro serpent …

The Serpent Sub tank almost feels like an afterthought…regardless, it’s a 22mm 3.5ml top fill tank which for all intents and purposes is a shrunken Serpent mini, 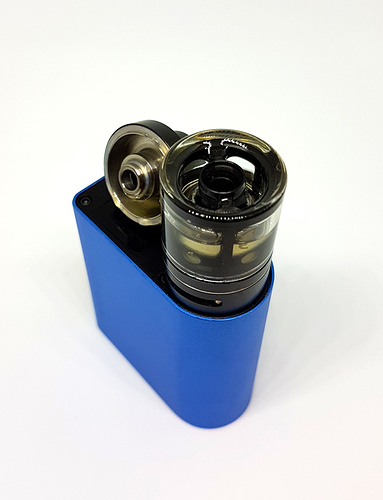 And it is a great little tank, excellent flavour as you would expect from a Serpent BUT…and it is a BIG but

This little whippersnapper, seen here with the supplied .5 ohm stock coil, Sat all quiet and well behaved, has a dark secret…This is the tank that sat at the back of the class, all unassuming and shy, amongst the chaos from the rest of the screaming ‘Pocket power posse’ and then without warning…stood up and declared…I TAKE A KANGERTECH RBA! …

That’s right folks…the Achilles heel of almost all ‘Mini kit’ tanks is that you are tied to buying stock coils as they seldom supply or manufacture an RBA for them, Now I haven’t tried this…but I will, I have one somewhere, but I have seen it said in a lot of places, it is touted as being able to take Kanger OCC and SSOCC so there’s no reason why the RBA from the same family would not fit… although obviously you will lose a bit of liquid volume…still worth it though. As for the rest of it well, it’s vapes well, even with stock coils, The flavour is excellent as it should be bearing the Serpent name, the air flow is adequate and the vapour production is actually very good for something so small, it’s made well, the threads are sound, it’s a solid little number…so if small is your thing then this tank will definitely rock your tiny little world.

But my interest was peaked slightly more by the heart of this mobile rig, the Serpent box, A 2000mah battery powered unit with 50w of fire power to burn all your usual culprits in the wire world be it Kanthal, SS, Ti or Ni,and has full TC capability in something ever so slightly bigger than a zippo… 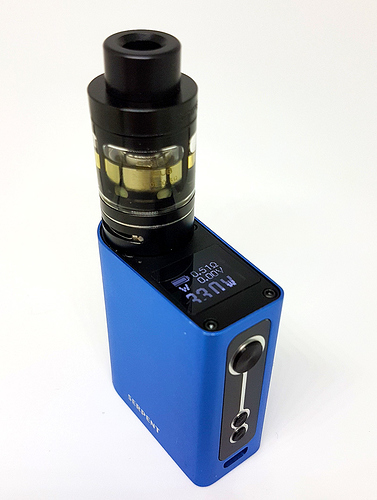 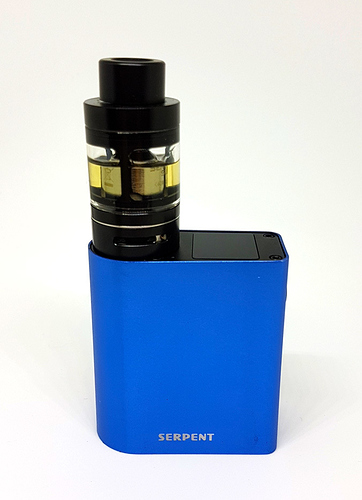 It has a top screen which…If I am completely honest I have never been a big fan of due to past issues with condensation, liquid leaking in and making them go slightly mad etc but, I’ve been using it for a week and seen no such issue thus far. What I do like about this thing though is it’s simplicity, If you have ever used a mod in your life AT ALL then you will know exactly how to use this from the get go, everything is exactly where it should be and the buttons do exactly what you would expect them to, there’s no ‘User’ mode or plugging it into EScribe to tweak your settings or looking at the screen of your mod like this…

every time you just want to bloody vape the thing, it’s clearly geared towards beginners and in my opinion is an absolutely perfect starter kit into the world of sub ohm vaping.
The box itself is lighter than anything I have tried so far …by a LOT…and is much more pocket friendly than the last mini kit I tested (The Wismec RX Mini). 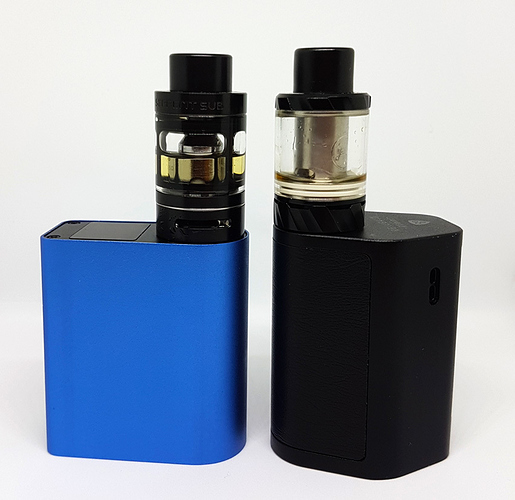 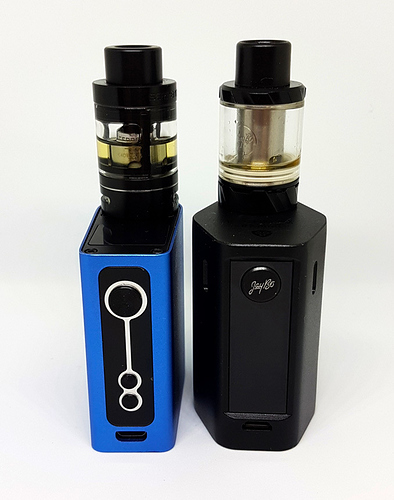 When this thing is in your pocket you hardly even notice it’s there. 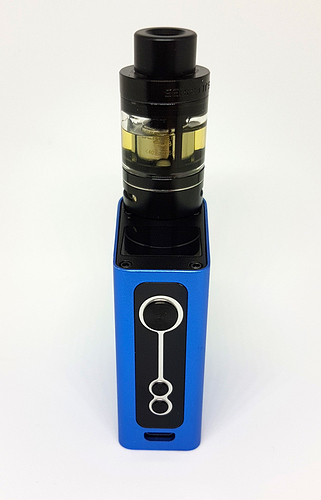 Something else worth noting is the battery life, that 2000mah battery, even being used at 50w last way way longer than I expected, now couple that with a tank that gives above what you would expect vapour and flavour production wise and you have yourself a handy little carry around that even the most seasoned of Vapers would appreciate.

There is however, one rather big plus point to this mod that I didn’t even pick up on when I reviewed the Wismec, The position of the spring loaded 510. Now as you can clearly see, the Serpent box doesn’t have anything like the girth of the Wismec yet…if you bought the Wismec standalone, or just fancied crowning it with something a little meatier, then you will come across this problem… 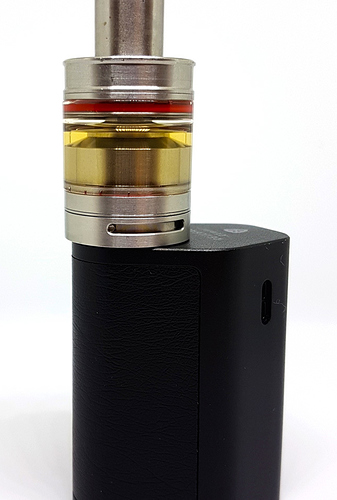 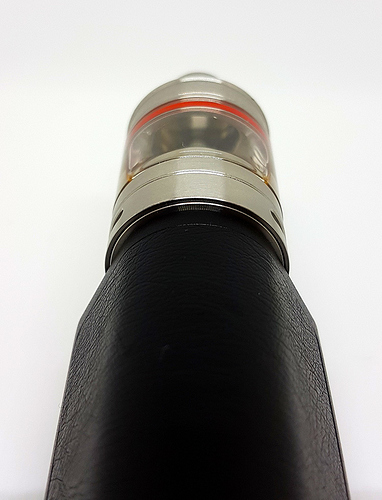 The dreaded ‘overhang’ …now obviously I have used a Serpent 25 for this example but it’s the same issue with a 24mm and as far as I know no one makes a 23mm (I could be wrong I just can’t recall one) so you are stuck with 22’s…however, on the Serpent… 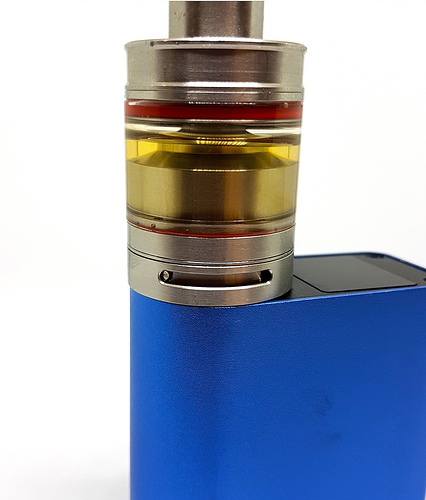 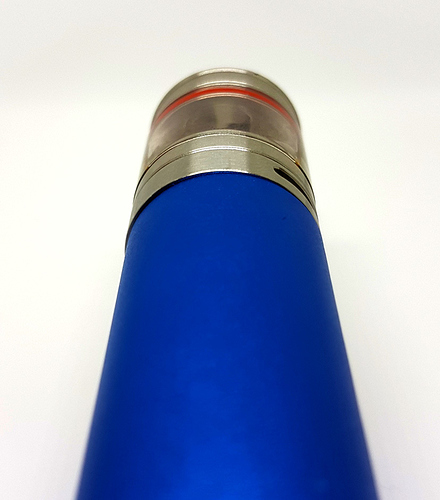 Fit’s like a glove…and that’s a 25mm tank, I call that very well thought out indeed. Now don’t get me wrong the Wismex RXmini is an amazing little device and has 30w more power but this could very well be deal breaker for a lot of Vapers, this tiny thing will have a good crack at anything you choose to try it with…within reason.

The package contents are what you’d expect 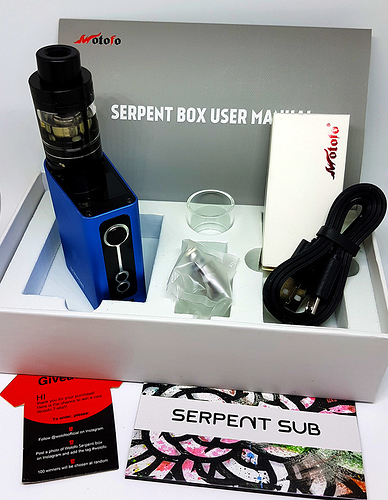 A spare .5 ohm coil, spare glass for the tank, the usual bumph and a USB cable to charge it with.

Well at least they get slightly smaller with these mini kits…I actually stayed awake that time.

My final thoughts on the Serpent Box kit would be…big thumbs up, out of my mini kits I have found myself choosing this one over the others purely based on the fact that it is so unobtrusive, slight, lightweight and functional, this kit knows exactly what it is and doesn’t pretend to be anything else, it’s a fantastic starter kit to some and a very good mobile carry around for others with excellent battery life to boot, and I for one would recommend this kit to anyone.

Price point is around £50 for the full kit which makes it pretty much average for a full lipo mini kit these days, however if you fancy grabbing one for yourself and use code APUGS15 you can get one for around £42 from here…

That’s not …quite…right (sigh)…but you know what I’m getting at.

@Lolly this is the one I was talking about my lovely

Aha! It’s definitely cute and the lack of tank overhang is a definite bonus…but I’m put off by its width haha!

The other problem we have is that I have just seen an email about the SMOK AL85 which I’m a little in love with, it being the baby of the alien itself lol. Just need somebody to send you one for review purposes 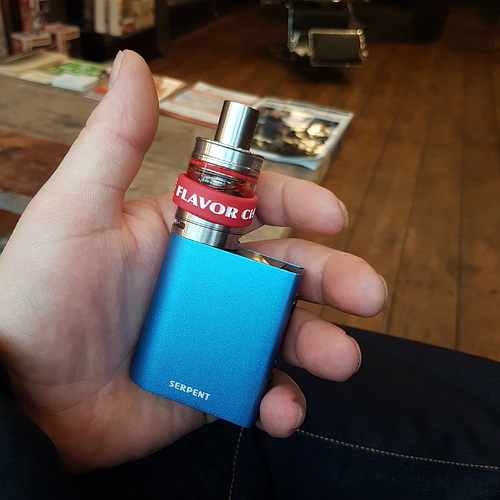 It actually is diddy! This is why I love a hand shot…deceptive this size business

Yeah i know what you mean, you cant beat a good hand job…I’ll do that more often…

I saw that too… Totally woke my maternal instinct - I promise I would love and protect it always, the cute little baby alien.

Augh, all these imporant and life changing choices (and money!)

Great review! That thing is pretty tiny. Not that I’m a size queen or anything.

A pic with it beside your Whiterose resin box? 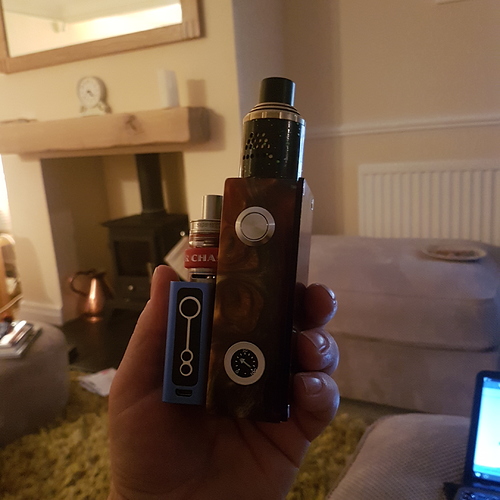 Nice review mate… as always. I do enjoy reading them

nice vv box you got