Short, Fat and Hyper…three words that are very close to my heart…in fact if you met anyone that knew me as a kid and you asked …“you knew Pugs?”…they’d reply “oh sure…you mean short fat and hyper?”…

Hello once again my chunky plume chucking chipmunks, back once again with some more drivel about something or other…Sick of me yet?..

If the end of 2016 was the era of the ‘Mini Mods’ then early 2017 seems to be suffering from what I can only describe as ‘carrying a little holiday weight’ as all the big guns appear to be adorning us with what has become known as the ‘Hyper Mod’, Multi battery devices harnessing offensive amounts of power capable of making even the hardiest of coils wither and shrink with fear…

Now this isn’t exactly what you would call a ‘new’ idea, I have had my Maxo for around 5 months or so and if I am honest was a purchase I thought would be more of a novelty, I was wrong…I use it daily, but now it would appear that every Tom Dick and Harry want’s a piece of this very large pie, and the ‘Tom’ in this instance is Wismec, with their entry into the Hyper Olympics…courtesy of my good friends at Urvapin …The Reuleaux RX300 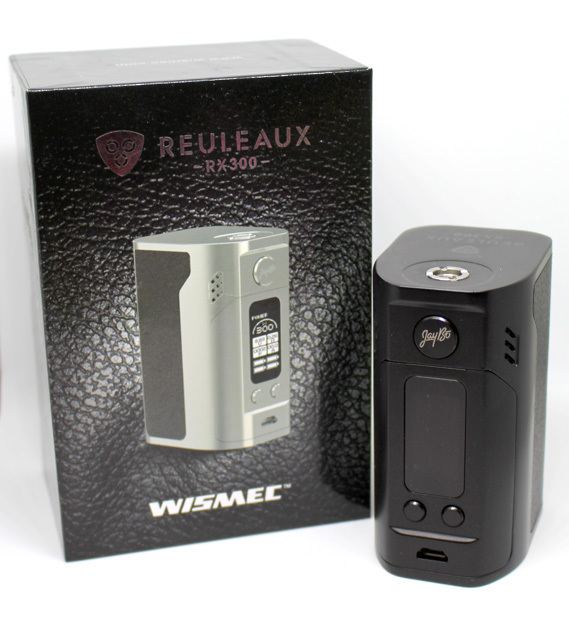 That’s right Alec, that there is a mother funking Space Station.

The RX300 is a Quad 18650 powered 300w temp control power station, 300w!!..Preposterous!!.. …which leads me to a discussion I keep seeing time and again on Vape forums, do we need all that power?..I mean the majority of vapers barely go over the 100w mark so what’s the point?..well, for me at least, the point is longevity. You see my Maxo never leaves the house, it’s a beast, it’s far too big and bulky to be a carry round, and it’s a through and through desktop mod, it sits on my bedside table and never leaves, but it’s a looong time before I have to recharge the batteries so it has inadvertently become ‘Mr Reliable’…always there and always ready.

Look at it another way…does your car only do 70 mph?..probably not, it probably does between 110 and 150, do you drive it balls out ALL the time…no…but it’s nice to know the power is there if you need it, and that’s where the Hyper Mods gain their appeal.

I have absolutely no doubt that should you pull the trigger on a hyper mod you will from time to time push the limits of your vaping ‘wall’ and try ‘that’ coil with ‘those’ watts, it’s inevitable, just bear in mind that you will also be pushing the boundaries of safety, something us vapers care very much about…and with this power comes great responsibility…(Super hero mantra…really?)…for these mods are more than capable of producing ridiculous amounts of clouds given the right set up, so much so that you could very well be blowing vape out of your ass and need an assistant on hand with a water pistol to cool down that billowing ‘balloon knot’ …

Painful…believe me I’ve been there.

So what about the RX300 then, we know what it can do but what is it like as a Mod in it’s own right, well it’s certainly very solid, and heavy, but apart from the obvious power advantages there’s nothing weird with respects to using one. 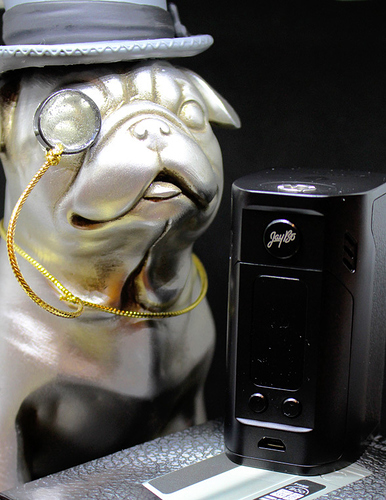 Front facing power button, power up and down buttons and a micro USB socket, all surrounding the screen…see…normal, all housed in a very solid frame which feels like it can safely contain all that power, I mean putting something with this much umph in a flimsy frame would be just asking for trouble …the slightest upset and…

The screen has way more information on it that it’s smaller siblings such as a battery bar for each battery, Amps, volts, puff count and ohms…BUT…it is all crammed on there, without my specs on I could just about make the Wattage out but the rest was blurry, the screen seems to have quite a wide border around it making the usable screen far too small in my opinion 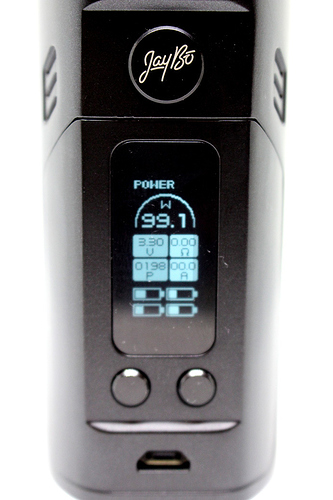 Another issue I have with the RX300 is…again with Wismec…the position of the 510, It’s far too close to the edge of the mod. 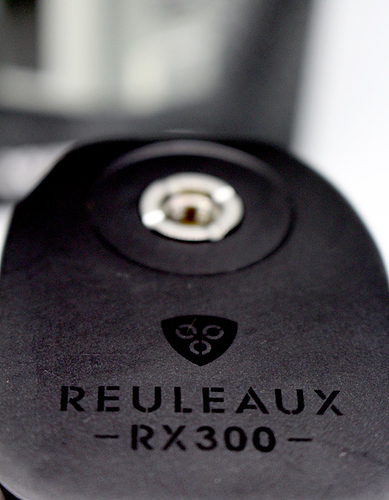 It’s a slightly recessed 22mm but it is fine with your 24’s and 25’s…anything bigger however and you will get an overhang, this to me seems like a ridiculous oversight, with this much power on tap you will be more than tempted to slap on a Temple 30mm or something similar with a pair of low ohm huge coils to see what all this power can do…but the overhang will bug you…silly Wismec.

Something the RX300 does have in it’s favour funny enough…is it’s size, yes its fat…

It actually fairs quite well…

It’s about as girthy but not as tall or wide as the Maxo due to the batteries being put in ‘squarely’ instead of a ‘diamond’ formation which I kinda like, it obviously feels big in the hand (stop it) but as far as the RX3oo goes it’s all about girth not length (oh just…sigh) and it has a MUCH better battery door than the Maxo.

Another trick up the RX300’s sleeve is something I haven’t personally seen on any other mod, it can also be used as a power bank. 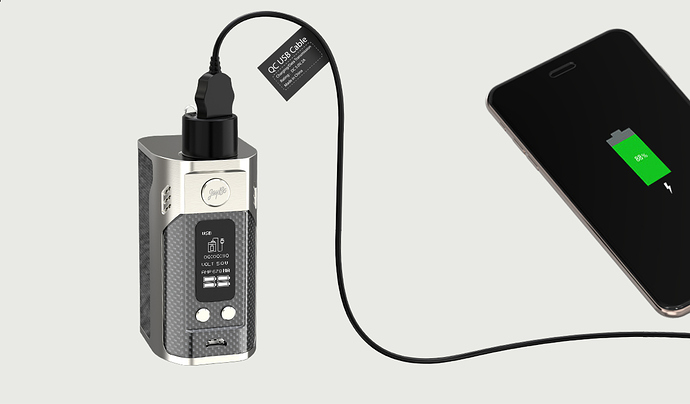 The 510 to USB adaptor is an optional extra however and didn’t come in the box I had, it’s a neat idea, but the thing is, I doubt that many people will be using this mod as a carry round, it’ll more than likely sit on the table at home so the need for this is somewhat confusing, but it’s there if you do, I can’t comment how well it works due to not having the adaptor but…it’s a tricky little option.

The finish on the Mod is OK, it’s the same kind of paint on all Wismec’s which to be fair isn’t amazingly hard wearing in my experience and sure enough even after only a week of having this at home it has gained a couple of small chips, nothing bad, and I don’t know at this stage if they even make a silicone sleeve for it…it embarrassingly tried to squeeze into the Smok Alien sleeve just to prove it could ‘fit into one’ … 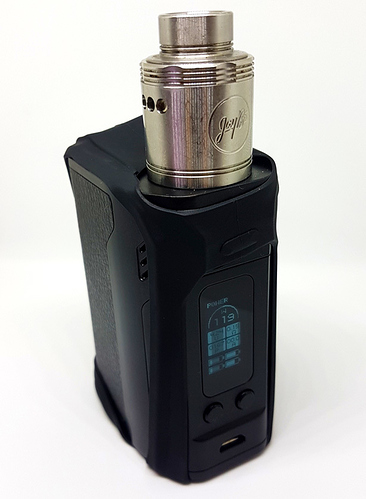 In the box you get the usual USB lead, manual (which is actually useful for once) and a couple of extra Brown leather effect stickers should you not fancy the black… 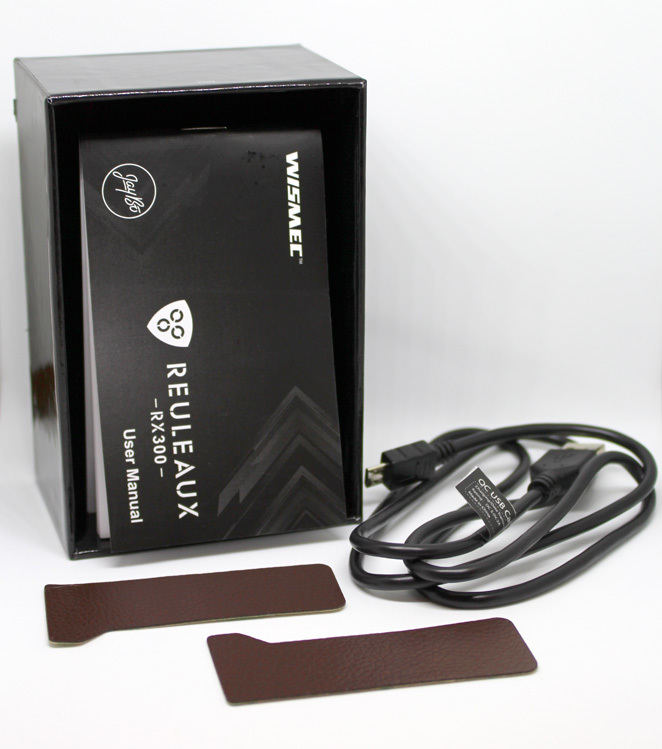 Which is always a nice touch.

I’m trying to turn over a new leaf with regards to the specs sheet, I know you want them, I know you enjoy them, So I am going to make my peace with the inevitability of the whole debacle…here…I hope my enthusiasm is shining through right now…

My final thoughts on the Wismec Reulaux RX300 would be that this is a very solid desktop mod, which for all intents and purposes is just a fat RX200 that lasts way longer with the batteries and is perfect for staying at home and using the kind of builds you wouldn’t normally try on a smaller mod, it has a ridiculous amount of power which can take your cloud throwing to another level if that’s your bag, I just wouldn’t try and have a conversation with someone who is using one or you will just be presented with this…

orr…for very little more, you can get the carbon fibre edition which was on sale for around £100 but now…amazingly…around £49 here
Wismec Reuleaux RX300 300w TC Mod Carbon Fibre edition with 40% discount

I’m off to put this monster through it’s paces, I’m thinking of punishing a pair of DNA Cage Coils…

However, I shall be taking this bad boy outside in the shed I think…

And don’t forget to hop on over to my house at Steampugs to see how this beast scored.

Great review! Makes my day reading one of your reviews.

I like the looks of it a little better than the Maxo. Like you, I don’t understand putting the 510 on Something that big on the edge. It’s one thing I like about my Fuchais, I can put dang near anything on it with no overhang.

Thanks again Pugs for another great review.

And a USB adaptor - novel idea. Although if I had to choose between vaping and charging my phone…well, the phone battery would definitely be dead

Thanks as always man

And a massively huge thank you to you too dear

Great review as always , One of the first Dna200 devices I purchased was the Wisemec Reuleaux and it has been an absolute stellar mod .I think the RX300 would be in about the same class as far as portability.
I do think they both are great road trip mods they are large enough to fit very well in our cup holders and have enough battery life to last a long road trip.
I agree with my dear @Lolly about the power bank option though , damn a cell phone we need all that power for our nicotine delivery!

lmaoo, thanks man, and yeah you’re bang on…what we actually need is a phone to charge our Mods hahahahaaaa…

I think it is a neat idea and with four batteries we could always use it to charge our pocket rockets in a pinch.

I think it will be a popular mod , it is a nice looking package and with half the vapers being ladies …We all know how they love their girth…

One mod to charge all mods…like a daddy mod, lmaooo…

Sweet haha, love that…and oddly…that girl on the van looks a bit like my Mrs…

So they stole your van and your wife? lol

my personal thoughts about it are:

a) i found that the way it reads resistance ohms isn’t the best around unfortunately (i see other prices for Ohms in Ohm Reader and other mods too like cuboid, Vaporesso Tarot pro 160W and Geekape ohm reader and i can’t trust it for real when vaping in really low resistances)
b) the recent upgrade to 400W it was unneeded in real vaping world… while i haven’t seen any info in their site about the amperage max (for 300W was 50, is it the same for 400 as well or?)
c) i would love to see a bypass mode on this mod… it doesn’t exist unfortunately
d) the batteries even after the upgrade do not discharge in the same way… tried 4 married Mxjo yellow silver (3000Mah, 35A, Yellow silver) and 4 married VTC6 by Sony (3000mah, 30A) same thing with both sets… this is another thing i really didn’t liked… and i don’t feel safe to use many watts on it…while there are times batteries are getting kinda hot when going near 20Ohms…(my battery sets are new b.t.w…i wouldn’t expect that)

Well…mines great…still…4 months later but hey…your allowed to be fashionably late…wanted to make an entrance huh …yeeeah you did…
My batteries are also very happy together, not a single argument between them…same ones since I got it actually…I have’nt exploded either!!..check that…I guess I’m just lucky that way…
Maybe you should take your batteries to a counsellor…I think I have a number somewhere although…reading your essay I’d say you have enough of those

Informative and Entertaining as usual Pugs. I always enjoy reading your reviews. You should start posting them in the “What has made you smile today” thread.

I’ve been using mine almost exclusively since I got it (maybe 2 months ago?) I fucking love this thing. Not a single problem with it. Thanks for the suggestion @Pugs1970 !

@Pugs1970 you have the writing skills of a fucking 3 year old and your humor is very low brow. It appeals to only lesser intelligent people. Your constant use of gifs is not amuzing at all. It is just well…

Fucking absolutely perfect… I had you going for a second didn’t I. Love it as usual man. Keep up the good work!!!