I was sent this thing by @AtouchMall and you can see it here: https://atouchmall.com/justfog-p16a-starter-kit_p0302.html

This lil guy takes me back to the days of using an eGo spinner battery and a little EVOD style clearomizer. It’s very nostalgic. Might be a nice, cheap option for someone just starting out and/or who needs/wants something very simple. Works well for what it is, but nowhere near satisfying for anyone who is used to anything more powerful 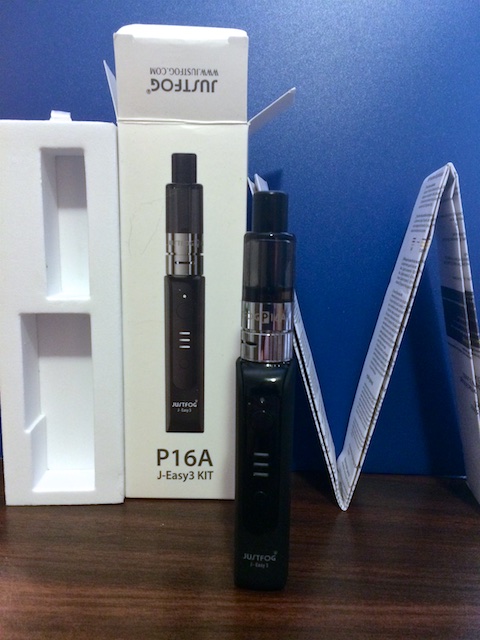 Without a clearomizer attached it blinks three times. Four clicks turns it on/off. The clearo is childproof and <2ml so it’s TPD compliant, I assume. Push down and turn to remove the base and install the coil. Turn the top of the clearo when it’s on the mod to open/close airflow. The tip has an anti-spitback metal piece in it and is not meant to be replaced. 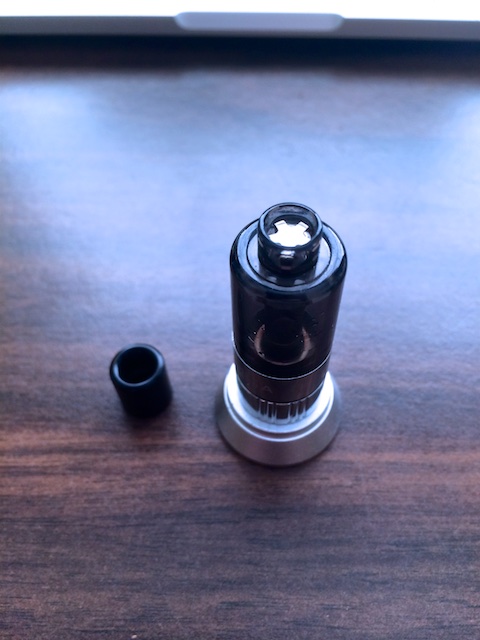 Once you’ve got the clearo on, push the big button to fire. Push the smaller button at the bottom to change the voltage. One bar is 3.4v, two bars is 3.8v, and three bars is 4.2v. 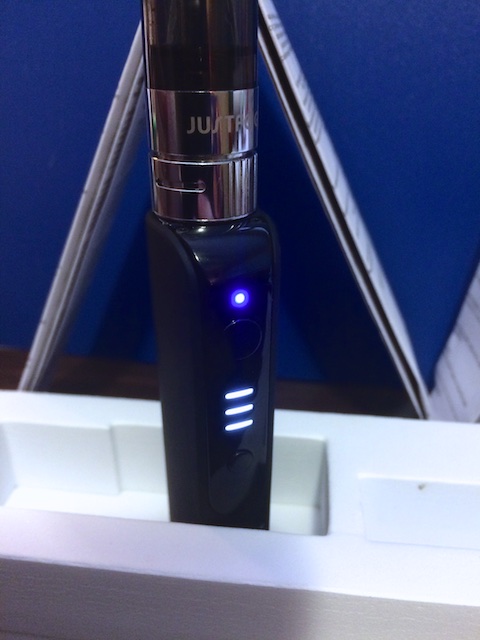 The circle LED changes colors to indicate battery remaining. White is 60-100%, blue is 20-60%, and red means <20%. The LED blinks 4 times when the battery is dead and needs to be charged. It has all the basic protections: short circuit (won’t power), overheating (10 sec cutoff), overdischarge (blinky light and power cutoff), overcharge (power cutoff when fully charged), and overvoltage charge protections (circuit blocks current). Mini USB port at the bottom to charge it.

I’ve taken this thing to school a couple of times for a stealth vape in the bathroom. I have four classes from 9:30 am to 4pm with only 20 min breaks in between this semester. Going down two flights of stairs to vape in my car (not supposed to vape on campus) and then getting back upstairs to my next class isn’t exactly feasible. For that purpose, it works pretty well. When I first got it and tried it out it I found myself puffing on it just for nostalgia’s sake. The battery is tiny—about the size of a pack of gum. 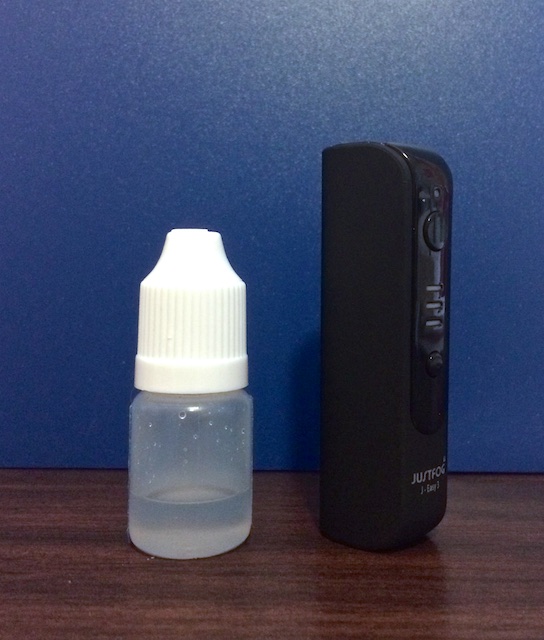 It has a nice matte finish so it feels nice in the hand. It’s much smaller and lighter than anything I’ve used in the past. The tank is glass, the metal feels a little cheap, the drip tip isn’t bad. 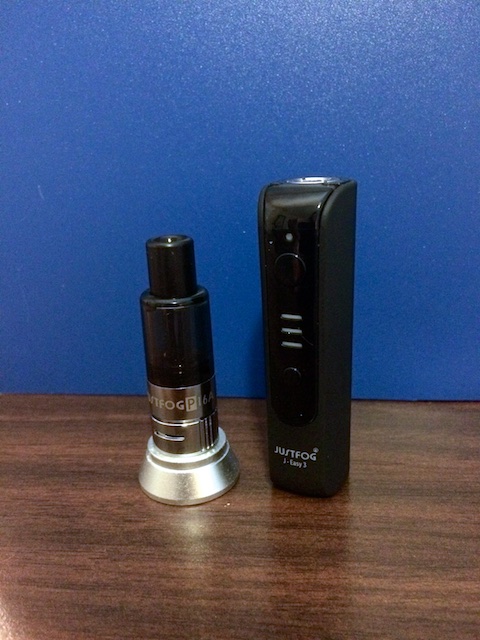 The coil appears pretty well built, but definitely not something I’d want to take apart and try to rebuild…it’s itty bitty. 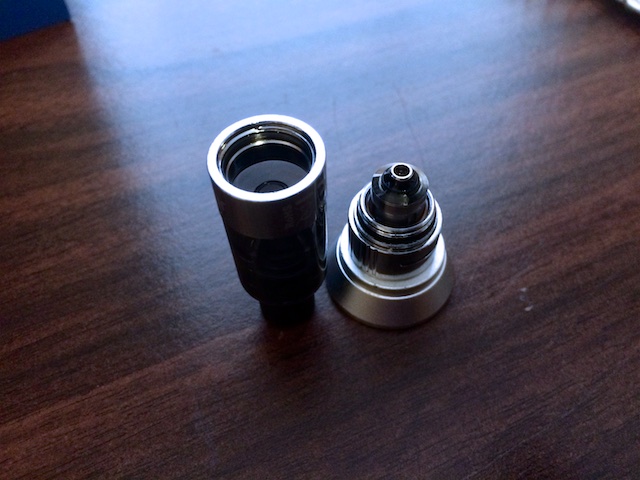 The flavor and vapor are just meh. About like I remember from the ego/evod days. I’ll hang on to it for school. I gave my eGo AIO away that I was using and this is a fair replacement. Actually feels a little bit higher quality and better built than the AIO.

I started with the predecessor of this on the Q16 a year ago. It basicly was the same machine and used the same coils.

My advice would be to steer clear of this one. I would fry the coils faster then i could replace them even when primed, it just couldn’t keep up with 2 serious drag or tootle puffing. On top of that vapor production is really low (i still mtl so not ito huge clouds) and flavor is almost non existing.

If u want a cheap, small KISS starterkit i would recommend the eleaf ijust start. Or the istick basic since the first on can be harder to find. Good flavor, good vapor and it doesn’t get any simpler then this.

If you happen to make a china order ad one for if any of your friends might want to be converted in the future, where getting closer to that point in the year again where people think about bettering their lives.

I was sent this thing

That opening sentence says it all

I tend to agree although I don’t think I hate it as much as you. That being said, I highly doubt I’ll buy replacement coils when this one bites the dust. While the AIO I had felt more cheaply made, the vapor and flavor were better. This is basically a baby step up from a gas station e-cig.

I haven’t had the coil die or taste burnt yet. I use pretty high PG juice though and I can’t see this being able to stand up to anything with higher VG. I use it pretty sparingly though so that might be part of why it’s still hangin’ in after a week or so.

Wow that thing is teeny tiny! Thanks for the review, @JoJo!

Its not that i really hate the thing or hold a grudge or anything. I don’t really know how to put this and not being native english makes it even harder. But i really think we as convinced (experienced) vapers aren’t doing anybody a favor with anything then putting a sticker on their that warns people to stay clear from this thing, excep the maker. I mean an experience vaper won’t be interested in this machine. And for a smoker interrested in vaping i think we (people with some experience that have tried this device) can agree that there are better options at this price point. With this in mind i think we as a community should push these better devices.

On the joyetech aio it again is another machine i can’t really stand behind. I certainly understand it has help many people make the switch and appreciate it for that. But again i think their are devices better suited for that like the one i mentioned, in another price range probably the nautilus (now v2) or a kanger subvod (this is a geuss only used it once).

Anyhow i’ve ranted long enough so as a summary i will just say. If you’re thinking about quitting smoking or want a cheap simple device for a mtl style vape this is not the one. Even as a complete beginner kit i couldn’t rate this any higher then 6/10 and thats being generous.