Quick Reviews of the Vaptio C Flat and Fusion Kits

I’m woefully behind on reviewing some of the things that @Vaptio_official has been so gracious to send me. Three more to go after this. Sincerest apologies to them, but I’m sure you guys don’t give a hoot.

I’m combining these both into one review because I didn’t use either for very long. They’re both very much MTL setups and that’s not my thing. As usual, if you want nitty gritty details and tons of nice photos, go to their website or search for one of the reviews here done by actual reviewers.

This guy was decent. I used it for about half a day to try and get a feel for it. It’s a pod style system and the shape was fun. 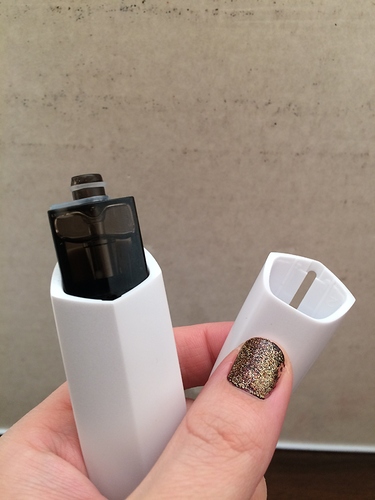 Although, it felt really strange to put it down on the table. I’ve been using mostly boxes and RTAs or sub-ohm tanks for so long that laying something down just felt wrong…like a recipe for a messy disaster. Obviously because of the shape, the thing won’t stand up. Trust me, I tried more than once. While it’s bad for standing up, the shape is actually nice for holding and I found I kinda liked the duckbill mouthpiece thing. 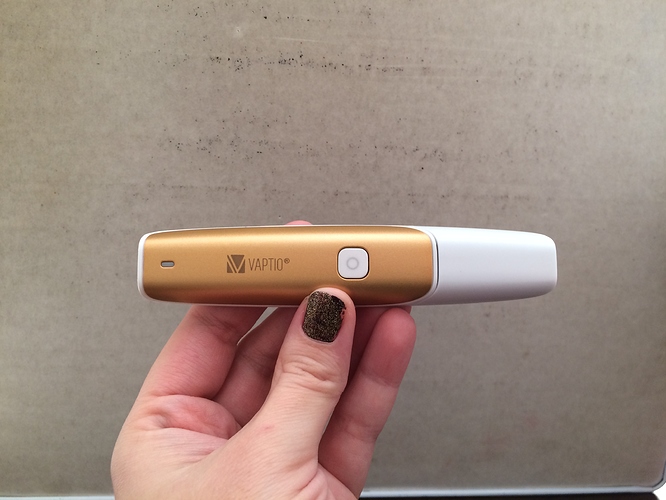 Vaptio claims on the website and in the manual that the way you use this is turn it gold side up for MTL and turn it upside down for DTL. That’s absurd. This thing does not have enough power, put out enough vapor, or have an airy enough draw for it to come close to usable as a DTL device. Most DTLers are looking for a lungful of vapor and this is just not going to give you that no matter what way you turn it. Vapor production was lackluster, but my opinion might be slightly skewed based on what I’m used to now.

My mom is one of those people that I never would have guessed would switch to vaping. She’s not really into gadgets or tech. She finally got a smart phone this year. I gave this one to her at Thanksgiving and she said at our New Year’s get together that she really enjoyed using it. She liked that it was small and fit in her purse, that it’s light, the shape, and the way it vaped. Her biggest gripe is that she doesn’t shop online, so she has no way to get the pods for it unless I buy them for her. She likes being able to go to the vape store and get coils. Not really a feasible option here. The pods are reusable but are proprietary (typical for this type of thing) and cost $23 for 4 on Vaptio’s website. I have a feeling when the two pods it comes with are used up, she won’t be using it anymore.

I think this type of system is designed for users looking for easy MTL operation, especially new ones looking to make the switch and who want to “try” vaping. But, for what it is, I think the price point and the cost of pods would be a hinderance to someone in that market. Operation seems fine, it seems like a quality device and has lasted longer than the Ego AIO I bought my mom, but if it hadn’t been given to me, I wouldn’t buy it.

Bottom Line: I can’t recommend it for the price they’re selling it at. Half the price for the mod and the replacement pods and I could see it possibly being an okay starter system.

Another AIO device I didn’t use for very long. I have very few thoughts on this one. I didn’t even vape through an entire tank with it. It wasn’t satisfying enough in vapor production or flavor for me to keep trying to use it. I also have no pictures, sorry. I boxed it up and gave it to my sister, but haven’t heard if she’s used it. Anyone who has read some of my posts on this know that she’s the person in my life I’ve been trying to get to switch the longest. She’s a tough nut to crack and nothing so far has done it for her. I’ll update this review(ish thing) when I talk to her and see how she liked it.

One thing I can say from my own experience is that the thing is pretty, tiny, and feels high quality. I was impressed with how nice it felt in the hand and kinda shocked at how small it was. It’s adorable. Aesthetics-wise if I were to buy one, I would get the nebula (I’m slightly obsessed), but the marine colored one they sent was really nice. Even my sister commented on how much she liked the way it looked and felt.

Okay, that’s all I’ve got for this one.

Thanks for the review. I used to be kinda snobbish about smaller devices, but now I like to carry something tiny and discreet when I am out shopping or driving. Good stuff.

LOL Thanks. It was for Thanksgiving. I was trying to be festive.

That tells you how long I’ve been sitting on some of these things.

Thank for the review. These small, simple, AIO devices I feel are getting more popular with new vapors. As well as pod systems. Loved hearing your take on these devices. Hopefully I will have the Fusion next week if USPS ever decides to finish sending it.

I was going to give it to my wife after I trying it. She is a hard nut to crack as well. Been trying to get her off the cigs for a while. I got her leaning by giving her a CYNC I was given. What VG PG ratio would you recommend on the Fusion?

Here’s hoping for both of us that this is it!

I didn’t really use the Fusion for long enough to get a solid opinion. I typically vape between 30/70 and 40/60 PG/VG but the juice I gave my sister was 20/80. I’ll let you know what she thought about it. If you wife is not PG sensitive, I’d think going the 40/60 route would be good. I don’t know how it’d hold up with a Max VG juice.

I think that the fusion would be cool. I have been really eyeballing some of these small kits for “movie theatre” type use. The only thing that is stopping me is the fact that it would be really hard to rebuild and wick. I love doing it myself and hate the dry taste that I get from any prebuilt coilheads.