trying to get the bready flavor into my cereal mixes. any suggestions that wont overpower the flavor ?

I use Cookie (FA) and Apple Pie (FA) as well as a tiny bit of AP in mine: Cereal Port

Thanks for sharing that.

I use Cookie (FA) and Apple Pie (FA) as well as a tiny bit of AP in mine: Cereal Port

I finally got some more Lime Tahity Cold Pressed in today so I gotta give your Cereal Port a try this weekend. I have been attempting to make my own all FA cereal mix but so far the results are less than satisfactory

Health Cabin Cereal. At .50 it’s a perfect cereal base and I couldn’t be happier with it.

I’ll have to try it… Thanks @authormichellehughes!

yeah that stuff is SUPER potent. I’ve yet to try out the other health cabin flavors I’ve purchased except for sweet corn which is just as strong.

I was navigating the site when I came across this. It says the cereal is oil water based. 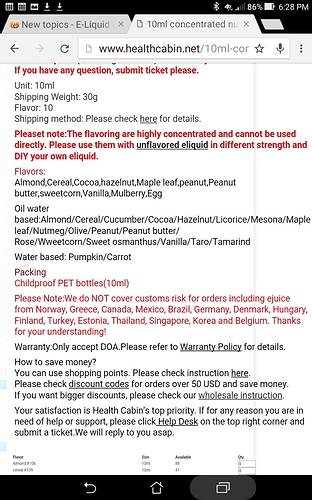 Not necessarily a bad thing - if it’s water soluble and lipid free that is! ;D

Okay, I’ll order and give it a shot. Thanks.

I’ll order and give it a shot.

Thanks for the link. Besides the Cereal, what else do you recommend by HC?

I like the sweet corn LOL but it’s a realistic sweet corn. Grape is like a grape juice very sweet… Cheesecake I just mixed some up so don’t know yet it needs to steep… Caramel pear is good

Would INW biscuit work? Its all I have at the moment. I cant seem to find acetyl pyrazine here in South Africa. The stuff is forever out of stock.

I was curious where you got health cabin at? I googled it and nothing popped up other than a juice vendor, nothing about concentrates… Apparently my Google fu is leaving something to be desired today. Any response would be greatly appreciated as I’ve nailed my fruit ratios for a Trix I’ve been working on for longer than I care to admit, and now I just need to nail the cereal notes