What in cornbread hell did I vape in this tank 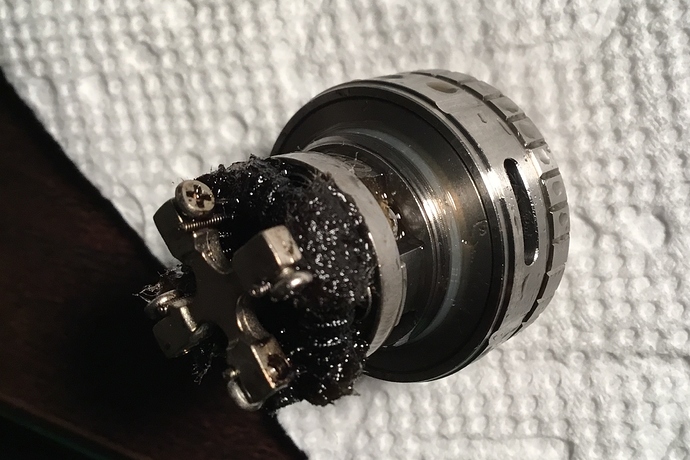 @Dan_the_Man is this some stuff out of your 1 liter bottle of bad mixes? It almost looks like I ran 16 tanks of NETs through it, but I only drip NETs.

A Guinness or a Kush and/or a combo of both!

I have left a tank set idle for a couple of months after emptying before rebuilding and a vanilla custard vape will darken the wicks like that.

I had to chip off stuff in the chimney. I don’t think this tank has sat but about 2 weeks. I had a G4 deck on it and it was wicked with cotton. I rarely wick with cotton and that is my first 4 coil tank. I switched out the G4 for the G2 deck.

I wish it had been Guinness or Kush or both, lol. I did smell a hint of bourbon so I’m guessing whatever I had in there last had Dark for Pipe in it.

I had to chip off stuff in the chimney. I don’t think this tank has sat but about 2 weeks

Wow , that takes it too a whole new level. The worst I have ever found was a castle long clone but I have never had to chip anything out of the chimney before.

I may have exaggerated a tad on chipping it off. But it was some nasty stuff up in there. Dish soap and some elbow grease got it out…I hope…I’m vaping on it now.

Looks like that black stuff in the canisters from Prometheus. Dont touch it or youll spawn an entire alien race LOL

Really afraid the FDA will ban oil soon. I had no choice but to stock up.

Holy Moly yuck! I’ve never ever seen anything like it! Great job!

Right? When I popped it open I was like OMGWTF!!!

Amen brother. Fuuuuck! Couldn’t you tell something funky was going on by the taste? Seems it would have tasted like burning tires.

I tried FA Irish cream and caps cup of joe a long time ago and got goo in 1 day but nothing ever like that! Jesus

I didn’t notice anything. Like most of my RTAs I change the wick when I get an off taste or it starts to weep or leak. This tank lost vacuum a few weeks ago and pooped all over my mod. I took it off and put anther RTA on and I decided to wick it up today.

Running some Rhodonite through it now and will check it a few days. But this time I put a 2 coil deck on it and wicked with Rayon.

FA Cocoa would be my vote.

Oh my lord. Is it a new flavour perhaps “Squid Ink”