Hi mixers
due to the location i live in. the only available flavors i can get are
FLAVOR ART FLAVOR WEST INW
can someone please advice me with some recipes only composed by those particular brands
cheers

If you reduce the creams to 0.25% try adding in custard FA. Then so on.

If I could only have two brands, flavourart and inawera would be my choices!

Here’s another that I love, you could probably try swapping out the tpa marshmallow for fa marshmallow. Then it would be all inawera and fa flavors. http://tjek.nu/r/66wq

I haven’t had fa kiwi yet, but I absolutely agree that FA’s Fuji apple, white peach, and caramel are all wonderful.

Kiwi FA is good. Spot on. I do like to add alittle kiwi double tpa just to round it out but kiwi on its own is solid imo.

My best advice is stick with flavor art, they’re the best overall quality in my experience. Flavor west concentrates have a tendency to burn my throat

Thanks guys for quick respond and valuable advice
but i’m bet confused here shouldn’t the flavoring comes around 15-20% ???

No, not necessarily. Especially with fa and inawera. I thought that too when I first started doing diy liquids and I ended up with a bunch of crap liquids. 15-20% flavor is more like the high end of where you want to end up. There are plenty of recipes with fa and inawera that are amazing with a total flavor % of as little as 4-6%.
For example, the second recipe I linked to is only 3.8% flavor. It’s quite strong. If I tried to up the flavors to 15% it would either be disgusting or it would have so much flavoring that you wouldn’t be able to taste them at all.

exactly I’ve done some bottles up now but unfortunately all end up to taste like biscuit
so that’s why i thought it’s because i replace the other brands with FA , FW or INW
i’ll reduce % and see how it goes

The worst method of mixing (imo) is to try to get the flavor % up to a certain point (15-20% or whatever). The best method is to look at each flavor, see what % others typically use them at, and use that as a starting point. Doing single flavor mixes is a great way to learn what your flavors are like before mixing them with other ones.

If you go to the calculator side of the site ( http://e-liquid-recipes.com ), click on “user” then on “flavor list”. There you can search your flavors, and you can find the low, high, average, and median % used for both single flavor and mixes.
It’ll look like this: 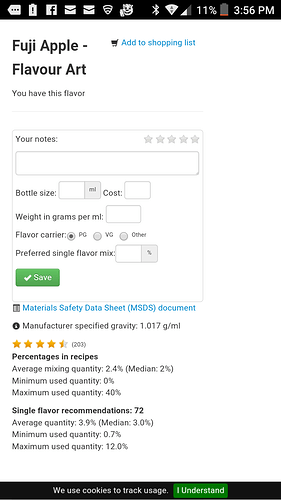 If I were stuck with only being able to get Flavor Art and Inawera concentrates, I wouldn’t be upset. Now just Flavor West, I might be very upset.

Don’t be afraid to try to substitute FLAVOR ART FLAVOR WEST INW with what’s in another persons recipe.

How I do it is find the notes on the flavor that is close and see what “most” people use in recipes as opposed to as a single flavor… and sub it from there.

FA, FW and INW are all pretty good. It might not be a perfect match but you can get close and sometimes close is even better!

Cheers to you my friend!

That’s what I’m doing now I’m collecting all information i can get in one word file and I’ll do some studies
The issue with all my mixs is CREAM of any kind it jumps over the top note and turns more to biscuit or cookie. so I’ll try to combine 2 fruits or more together and reduce creams as much as possible

If that is the issue, start off with a cream only mix, play with it till you find the point where it isn’t predominate, then start playing with the additional flavoring ingredients… which is why a stone is good, with a stone (cream stone of your choosing) you know your using the exact same cream mixture for each rendition of the recipe your working on, either adding more of the cream stone or less of it till you hit that spot that you like.

I just wanna give a hint of caramel, vanilla or lollies instead of that Biscuit taste

sounds to me like maybe you want a custard instead of a cream, have you tried that? try and make your perfect custard then try adding the fruits to that…just a thought?

I seem to be posting this link a lot lol…