I need help with this recipe… I’m going for a yummy donut flavor, and so far all I can get is a Robitussin taste… I want my blueberry and raspberry to blend well and be the forefront… with a nice donut follow up… 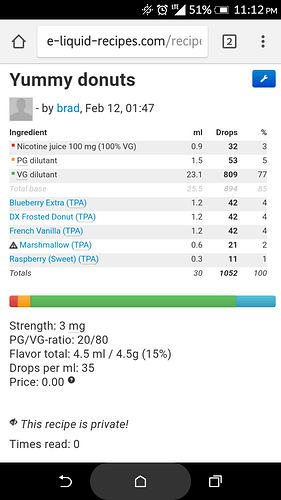 I’d try to keep the donut a lil lower so the fruit can shine a bit more BB is extremely difficult to really get to pop but adding an additional berry like your doing is a great start.

I do like the french vanilla being in there I feel it’ll soften the donut’s bready-ness.

She is on it, that BB extra can be very mild. Just like she said, the vanilla can steal the show if used too high.

Honestly, I haven’t had much luck with DX Frosted Donut, if you have a cart in progress, I would try throwing Capella’s Glazed Donut in as it comes off more accurate than the TPA.

But that is just me, good luck and let us know how it turns out!

Thanks guys! I’ll try these tweaks out and give a good hot water bath too… I’ll keep you posted.

Please do follow up with this one. I just tried blueberry and raspberry together yesterday and the result was dismal if not horrific. I’ve never vaped battery acid but I can’t imagine it would be much worse.

I’ve used BB extra quite a few times and even at 7% it’s weak to me.

I, too, would do as Amy suggested, except I would change the Raspberry to another berry.
I also would use two different Blueberry flavors. Maybe BB Extra at 4% and another at 2-3%

I just tested this one I made back in January and it’s awesome ! The Blueberries are popping in this recipe.

I just tested this one I made back in January and it’s awesome ! The Blueberries are popping in this recipe.

Thank you ! I’ve been enjoying it pretty steadily

Is this the same as … Frank A. Zeppola…or is it Led Zeppola ?

Can you sub Hindenburg for it ?

Who you jiving with that cosmic debris

this the same as … Frank A. Zeppola…or is it Led Zeppola ?

It’s actually Z Z Zeppola. It’s got legs and knows how to use 'em

if youbwant to try the cap glazed dougnut ill send u one of my unopened bottles , if your in the US just pm me im not a fan of either tpa or cap but caps is the better of the two

Try adding 1% FA bilberry to your BB it helps a lot.

The cookie and glazed donut compliment each other to bring out the doughiness and crisp crust of the donut. Sub and double your blueberry extra for fudge and you should be set.

As for your recipe I agree with what everyone else is saying, reduce your marshmallow and vanilla and increase the blueberry or try a different blueberry. I can highly recommend Blueberry Jam (CAP) it a very vibrant blueberry without being overly jammy.