Not really asking for someone to clone for me, just asking opinions on the following recipe. I am trying to clone Vapor Hut’s ‘Mossy Oak’. The vendor’s description ‘used’ to read (Its since been changed) “Cinnamon, banana, vanilla & nutty undertones.”

I’ve never tried this juice but I did try they’re wookie cookie and spent 6 months trying to clone it. 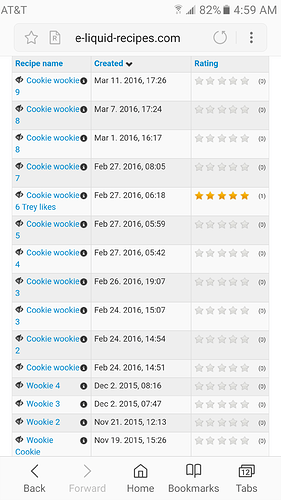 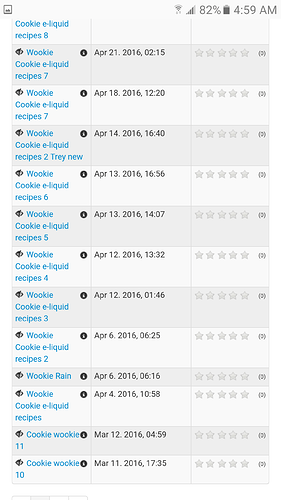 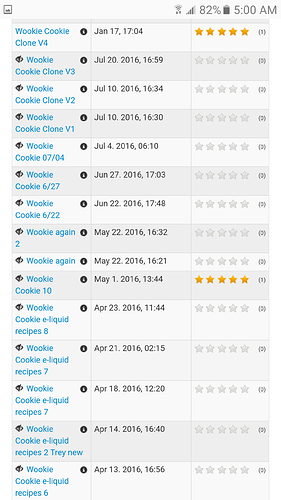 Final complete version…once I figured it out I haven’t vaped much of it. I do think the whipped cream could be dialed back a tad but it’s so freaking close I don’t even care anymore.

So what does this have to do with what you want to clone? Well I obsessed and kept trying to convince myself that there was something in there more complicated. I kept hearing that all they use is FW flavors and I didn’t want to believe it. So if I were you I would start looking at all FW flavors.

Here are a few that would come to mind if I were you based on the description and recipe you just posted… banana nut bread fw, banana Foster fw, banana fw, cinnamon roll fw, vanilla custard fw, and sweetener fw.

Banana Foster has a great natural banana flavor with vanilla undertones. It’s a terrible flavor to vape bc of the sugar but it is so tasty! Cinnamon roll is a great cinnamon roll flavor!

Just try your best to keep the recipe as simple as possible. You will thank me in the end. Let us know how it works out for you

I have a couple other recipes where it’s used at this percentage and it doesn’t come through too strong in my opinion, especially after a steep. I will agree that in this particular recipe, this percentage is too high after just a shake.

Thanks for the input. What you say regarding the use of FW makes sense when considering FWs use of sweeteners and the fact that Mossy Oak is hell on coils.

Unfortunately, I don’t have most of your suggested FW concentrates so, I’ll have to make a go with what I have.

I will have a Mossy Oak remix for you in a few days. I’m about 95% percent done. I don’t know if you saw the other post. I replied to a post of yours from 2 years ago and didn’t notice.

Hey man, would you happen to have any of your Mossey Oak remix and if so can I get some? Just let me know. I’m new to this site so I will check back with you.

Welcome to the forum

You can learn a lot about what’s in an eliquid by listening to reviews. While they aren’t going to tell you the company name, you do learn what people taste (of course what you taste could be different) it’s a start at least. From a reviewer I trust he says he gets a really sweet banana then a cinnamon and leaves a nut taste and then banana again. If I was going to take a wild guess and I don’t know this juice from Adam… banana nut bread and cinnamon with a lot of sweetener. That’s just a guess from the review.

I used to use Vapor Hut, liked the Mossy Oak, but can’t remember it’s profile cause it’s been a long time.

But! If anyone has tried a take on Darth Vapor from them, I’d like to hear all about it. Not to hijack the thread, but there’s nothing on it over on the recipe side.

It was a unique Dark Berry Cream and really was nice. Thanks, all!

I caught a sale at VH a while back and bought eight ounces. I still have some in the fridge. While vaping it and with the help of a ID10-T here’s what I have and, I think its pretty close. I actually think it may be better that the original. I know it’s no where near as hard on my coils. It’s not as sweet as the original.

I like it best after it’s steeped 14 days or so: