Hi. I just tried this recipe kindly suggested to me on reddit.

But I made a mistake and added 1g of both BC and SC (which nearly brought them up to the LMP %). Its nice still but I have a couple of questions.

After a 2 day steep colour started as light amber but now it is rust coloured. It’s no problem but is this normal? Why does it happen? Molecular interaction/chemical changes?

Also the lemon is very muted. Is this because of the mistake or just my tastebuds. Do the creams mute flavors? TIA.

Did you put the liquid in a dark place to steep? A colour change with steeping is pretty normal but usually doesn’t occur in two days unless you have it standing in the light. You should always put your liquids in the dark.

Creams need at least a few weeks to really steep out so when this is happening within two days I don’t want to know what colour it is after that time.

I am not an expert on creams but I’m sure someone else will chime in who is.

Usually the nicotine is the culprit when the colour gets really dark. Oxidation occurs when you have a big bottle around that’s getting opened quite a lot and it doesn’t react well to light either. Keep it in the freezer. Best is to put it in smaller bottles and take one out at the time.

You didn’t mention any nicotine in your post so if you’re not using it I’m stumped.

Do the creams mute flavors?

Yes, they do, especially when you over use them.

Ok thanks…So seems it is the mistake with the overdose of creams that is the problem. I will retry and pay attention more with my ratios :).

And yes I did put nic in at quite a high dose as i’m using 100mg/ml base and I vape at 18mg/ml. The nics pretty clean though just a very slight hint of oxidisation but almost clear.

It wasn’t steeped in the dark but was on my desk so not too much light.

How did you extract this information from what Josephine told you?

There are liquids that use more flavoring (yes, creams) that do not oxidize that fast.

This is your problem right here.

Thanks…the creams part was talking about the muted flavours not the colour.

Yes…point taken about the steeping in the dark. It happened very quickly though…it was noticably darker and rust coloured after 1 nights steeping. I don’t think it has effected the vape though (the colour change). I should point out it is pretty hot here at the moment…32 oC

heat and light are 2 of the worst enemies of nicotine based liquids… try a fridge when it gets so hot. If you don’t have a separate fridge, do try to put the liquids in a sealed container so you don’t get any cross contamination.

I understood that you were not supposed to store e-juices in the fridge? I have my nicotine in the freezer apart from my bottle for use now and my research sais that mixed juices would go bad in the fridge…?

Wondering what did the 1g error make when converted to percents? Also how large is the muffed batch?
I make errors every time i mix, I hope I can keep mixing for many years, but every bottle I mix has errors, if they are small enough I vape it, if they are too bad i adjust it.
Reddit is a good place to scrape recipes, but to be honest the users there are very very mean to me, I don’t think they like aliens. Stick around here and you will get the help you need, don’t throw anything away.

It’s usually not necessary to put e-liquids in the fridge, but it won’t do any harm (as long as you don’t get food bacteria or condensation in your juices).

If I had the choice between steeping a juice on my desk (in light) or putting it in a fridge, I’d probably opt for the latter.

I have an old freezer that doesn’t work anymore but still functions as a coolbox.
You could also buy one, they’re not that expensive. People use them for picnics too.

The mix was only 20ml so no great shakes but the 1g error was bad it equates to 2.5x so both creams ended up at 5%. Its difficult not to make tiny error in 100ths of a ml when using the scales but this was a biggy

I somewhat agree about reddit…I have at least 1 run in so far over nic…there’s a few plonkas around…but hey?

Sounds like u are doing everything right and stated that the nic is still relatively clear, The color change would be in your flavorings some can be very dark on there own and get darker over time. Gl to u!

Yes I hope so…I always do quite a lot of research before I go ahead with something. It was more of interest to me than a problem and learning often about networking so hence the post. Thanks for the feedback

Rust color to me, is like this middle bottle… is that what you’re talking about? It is possible that you get this color immediately, especially if you use some dark colored flavors like chocolate, maple syrup or coffee, but I don’t see any reason why a 20-25% flavor juice with your chosen flavors would cause this to happen so fast unless something went wrong (being exposed to heat, light or oxygen).
I’ve mixed plenty heavy cream juices that after a month steeping look more like the right bottle (or maybe ever so slightly darker). The rust color comes when it gets exposed to light and it does have an impact on flavor ime.

Another thought that just occurred, however unlikely, is that your mixing bottle wasn’t clean and something in it reacted with your juice.

I’m very careful when it comes to cleaning my kit etc. Just realised from your photo that I probable should have posted a picture. Its nothing like the middle bottle which I would describe as dark amber by the way

It started roughly like the right hand juice but developed a reddish/orange hue. You can still see through it though… I’ll try and post a pic.

Your middle bottle looks more like some of the experiments done on nicotin storage when its really oxidized!! 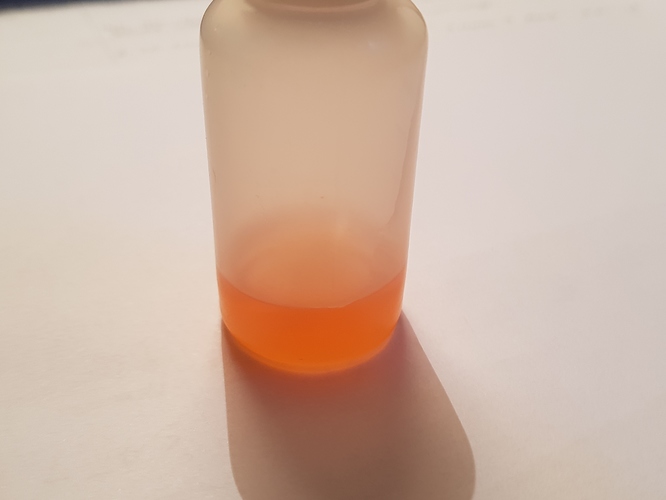 Forgot to mention that bottle is opaque.

I wouldn’t be too worried about that yet… I expected it to be a lot darker. To me this is more of an amber color instead of rust. Not that I’m an expert in colors in any way, far from it

I think if I ever post a question regarding colour again i’ll definitely include a picture :)

Everybody’s perception is different. Taste of the juice is not good and it has got worse. Can’t detect lemon at all now. And it lost its pleasant creaminess also…its quite bizarre.