I’ve noticed many people have mentioned that they takes notes when they test their steeping juices at regular intervals, i do the same. What would be useful is a feature to add private time stamped notes for a recipe.

Expanding on this you can opt to make a note public so others can see it and read the progress.

Expanding on this even more you could go full hog and build a visual timeline of the notes! It should really help highlight the decent recipes.

A very vague example i’ve taken from a template: 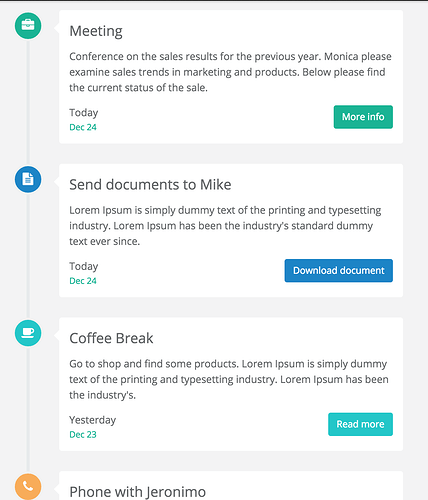 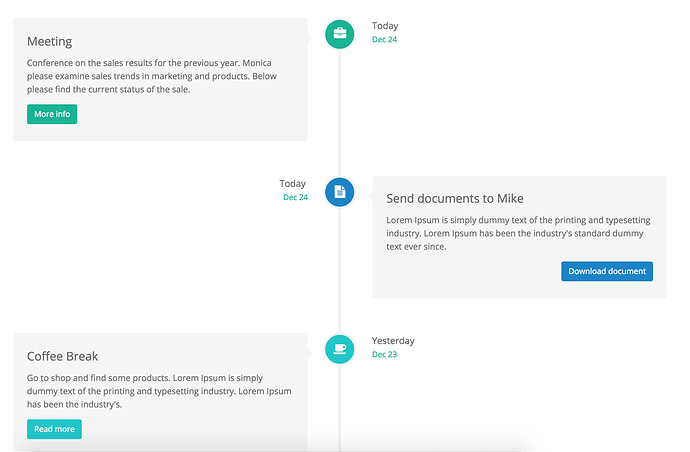 Obviously notes/icons etc would be juice based.

That is a nice presentation you have there. As far as the home site ( ELR’s calculator ) the notes below are time stamped each time you leave a note but then again if you publish it your notes will be published as well

The notes would be a great learning tool. You can learn a lot more from the process than from the finished mix, assuming of course that the creator doesn’t mind sharing.

The current notes system is a little basic I think and more like a comments system. The time line could work like a progress report for a new recipe so anyone can keep track of it if you click the “Follow progress” button.

Also just think if you was able to define specific steep time, mark it as a SNV and give it a specific status like “In Trial”, “Final Version”, “Complete” etc etc… It would be awesome and give the recipes a lot more structure.

It is a nice tool assuming someone wanted to know just what the creator went through to achieve the final batch ! I just had a juice I had tried on the 12th , today I tried it and I believe I missed the window of opportune time for that juice as it wasn’t as good as it was earlier which tells me it is more of a SnV and less of a steeper. I now have to rework it ! So it makes plenty of good sense to have a timeline.

@Amy2 you are a top contributor here and I would love to read your notes, but I don’t think I’d love reading everybody’s notes. [appropriately snarky emoji here] Since all of this is data stored on the server(s) here at ELR it might also easily quadruple the demand for disk space. The postings on ELR are full of “notes” as many people here are extremely open about their mixing experiences. It is however a great(!) idea …if hard drives (and backup tapes) grew on trees [repeat emoji] Adding a box for steeping time is a solid change request

All my notes are mainly in my head …I make small adjustments I write them in the description box, otherwise if it requires a drastic overhaul I am not afraid to dump a mix…haven’t done it in a lil bit but if I had to give advice about reworking a recipe I’d say up to a certain point notes and adjustments are in order , if that fails dump it and start over from scratch.

I don’t have a very good computer for storage I have a small google chromebook perfect for cruising the web and that type of thing but unforgiving in the storage department. So If I do write things down it’s in my vape journal and at this time I now how 2 getting ready to have 3 lol full of recipes and ideas and weird parings just stuff I’d think I’d like to vape one day. Can u tell I am ate up w/ DIY / Vaping

oh and @Phill, I know the problems you are trying to address …all legitimate. Please don’t take this as critique. I suffer the same issues here that you are addressing. Search can be like looking for the proverbial needle.

The challenge being; looking for quality information. The only flaw in your plan is the contributors. Much of the “hay” (needle?) here is made by newbs (such as myself) publicly posting Recipes and Notes which may be of little use to others, but the ability to post is what makes this a Community.

I think most of us could agree that there are certain Members of ELR that currently know how to make juice and deal with hardware …but we all come to enlightenment in our own time. Being inclusive drives that personal growth. The conundrum is how to empower the Wise with enhanced authorship while giving the rest of us a chance to publicly screw up [raises hand] so we can gain similar levels of knowledge and experience.

My only critique is that the solution cannot be piling delicious high quality hay on top of the hay of questionable quality …it’s just 2X the hay …same needle.

And I only wish the Gawds of SQL shine upon you in your quest that delivers an egalitarian solution retaining the warm welcome that draws in the new …for I too want to learn as much as possible as fast as possible. I would suggest something like a Wizards Corner, but I think it already exists out in the common threads.

I think there may be quite a few people that have tried and failed at DIY and have moved on. Maybe disabling accounts which have not logged on in 18 months (less hay). Their login still works and would reactivate their Flavor Stash etc, but would otherwise hide it (?)

Hey wait? It might be happening right now… respectfully

The concept really isn’t a bad idea. Even if you have it available with a keep notes private checkbox. It would be a little less you have to keep in a paper notebook. One step closer to being an all in one toolbox for recipe making. Not sold on the graphically timeline, but the concept is really useful.

Agree totally …I was only referring to the non-forum “recipes/flavor” side of this which exclusively text. If we could wave a magic wand and have a fully integrated site where we could import and export to say eJuice me Up calculator (whoever’s App) and capture all those (years of!?) existing Notes/Recipes to here, plus enter all our live notes? “All in one toolbox” might not be complimentary enough. Micro$oft or Phillip Morris my be writing Lars a fatty check… the possibilities!

Micro$oft or Phillip Morris my be writing Lars a fatty check… the possibilities!

Lars has invested a lot of blood, sweat, and tears into this site. If somebody offered him millions for it, I wouldn’t fault him for taking it.

History from other apps would always be a kluge as upload, parsing , and merging metadata has no standards among the databases. As we move toward FDA regulations I suspect we’ll see a large uptick in DIY mixers. Would be great to have all those tools in a first time setup.

s we move toward FDA regulations I suspect we’ll see a large uptick in DIY mixers. Would be great to have all those tools in a first time setup

My point exactly. It’s not just the USA. The TPD kicks in tomorrow for the EU and from November stockists have 6 months to remove all non compliant products. The UK has been flooded with USA based juices in 15/30ml bottles but 10ml is the maximum size allowed. Its going to be painful to find gourmet recipes once they have gone. Very Very sad.

oh and @Phill, I know the problems you are trying to address …all legitimate. Please don’t take this as critique. I suffer the same issues here that you are addressing. Search can be like looking for the proverbial needle.

No offence taken. I’m a developer so i look at it through those eyes.

The challenge being; looking for quality information. The only flaw in your plan is the contributors. Much of the “hay” (needle?) here is made by newbs (such as myself) publicly posting Recipes and Notes which may be of little use to others, but the ability to post is what makes this a Community.

Agreed. Maybe only if you have made a contribution. Building a timeline would take time and effort so the majority of one time posters may not use it?

I think there may be quite a few people that have tried and failed at DIY and have moved on.

They pretty much do nowadays

Storage would not be an issue and more so for backups as i’m sure Lars compresses the backups and text compresses nicely.

All in all i understand Lars situation. ELR is his baby and he likes to develop it himself. My suggestions are just that, - suggestions. Don’t get me wrong i’d love to help him on some of it and i’m sure plenty of others would BUT giving someone access to your baby is a big step.

excellent rebuttal, and absolute Best Wishes for the future of ELR