When I was in the Philippines, I fell totally in love with two flavors in particular but they are made there and it’s too expensive to have shipped to me so I want to make clones of them. Unfortunately, I am no good at all at being able to identify component flavors and couldn’t tell you what’s in them. If there are any Filipinos (or people who have/are traveled/traveling there), who know the flavors and can tell me how to make clones I would dance a jig for sure!

The flavors in question are “Brittle Bombs” (no company name on the bottle that I can find although there is something about “follow @ggairpremium” but searching for “ggairpremium” doesn’t come up with anything), and the other is “Sans Rival” by “Kremo Tasty Vape Sauce”. These two flavors are AMAZING!

Can anyone here help?

Is it from here? This is the only place I could find Brittle Bombs.

Yup. That’s the one! I used to buy it at SWT Trading in Makati.

Haha. My eyesight is going and I could barely make out the tiny print. Yes, that’s the one. ggSIR, not ggair. Thanks for that.

Don’t mean to derail, but they’ve got some interesting stuff over there: 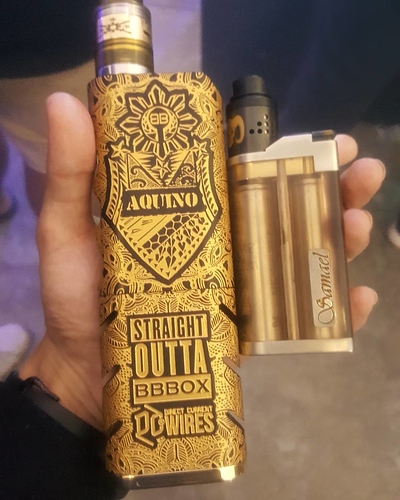 Good luck finding / making your clone !
What is the flavor of that juice ?

lol. No worries, derail away. That’s what threads are for!

I’m not sure because I can’t identify component flavors at all, but Brittle Bombs definitely has peanut in it. That, I can tell. Otherwise, no clue, but I guess it’s some kind of peanut brittle type of flavor.

The Sans Rival is based on a dessert which I just learned is specific to the Philippines. From Wikipedia: “Sans rival is a Filipino dessert cake made of layers of buttercream, meringue and chopped cashews. Its name comes from the French phrase with the literal meaning without rival. The cake may be decorated, left plain or garnished with pistachios. This recipe has its roots in the dacquoise.[1]”

Maybe someone with a knack for turning foods into recipes could figure it out? Though I looked to see if cashew flavorings were available and didn’t find any…

Cashew flavors are available. Talk to @Silhouette because I believe she also has some recipes with that in it.
http://e-liquid-recipes.com/flavors?q=cashew

Here’s the “list” of peanut brittle recipes
http://e-liquid-recipes.com/list?q=peanut+brittle
Try one, and see what its missing from Brittle Bombs.

They both sound tasty. Good luck !

So far, I have used Wonder Flavors Cashew, which is actually quite light and soft for a nutty flavor. Because of location, I’m not sure exactly what concentrates they would be using, or not be using, but I can suggest some flavors that could be close to what’s used. As for the Peanut Brittle, they could be using anything from a Peanut Butter flavor to straight Peanut. Both Wonder Flavors Honey Roasted Peanuts and Inawera Orzech Arachidowy (Salted Peanut flavor) are both splendid peanut flavors. You also have the more common TPA Peanut Butter, CAP Peanut Butter, LA Peanut Butter as well as others.

As for Sans Rival, there are many great Butter Cream flavors, I personally like CAP Butter Cream and FW Butter Cream, and WF has a yummy sounding Butter Cream Frosting. The Meringue choice for me is Flavour Art. I’m sure we could think up a starting recipe to get you close to the flavor of the mixes you want, they seem like pretty straightforward descriptions.

Brittle Bombs definitely has peanut in it. That, I can tell. Otherwise, no clue, but I guess it’s some kind of peanut brittle type of flavor.

Never had it, but if I was going for a peanut brittle type vape…

For rounding out the rest of the profile, I’d probably start with Inawera nugat, and then I’d be reaching for either FW butterscotch, or a good caramel (I use Cap caramel v1, but have heard good things about FW caramel candy).

This is something I may actually end up playing with! Sounds like a very interesting idea for an eliquid, and fits right in my preferences!