Hi All
Am looking for Dark Knight e-Liquid Recipe got this from Vape shop in Summerset west ,Capetown , South Africa When i was on holiday its Osem Flavor and have not mange to match it as of to date not even close
it has a nice popcorn after taste but has no fruit in it … has any one had this be for ? or know its real name ?

Post a link so we can verify its flavor profile.

I have no idea of the flavor you mention. However, I am currently enjoying a recipe called Marietta which is a coffee mix. My son is convinced that it smells and tastes like popcorn. I’ve accused the said son of being stark raving mad but he maintains the “popcorn” argument. Marietta also cannot be accused of any fruitiness.

will give it a go and see if its close . My problem is the taste is not sum thing i have tasted before food or drink in real life if that makes sense so i can really describe it apart from the hint of Popcorn at the end this has been the case now on 6 friends & Vape shops that have tried this flavor i got all Totely Love it but have the same problem describing it lol

do youi have the bottle or anything we can go off of? 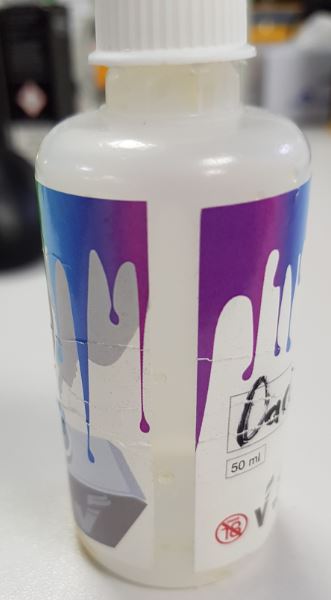 Hope this my help a bit

Looks like a house-made ejuice to me. Going to be hard for anyone without direct access to that shop to clone it.
Unless you want to buy some and send to someone willing to try to clone it.

I’d contact the store via facebook and ask what the flavor profile is or the little “bio” in the marketing labels. i’d offer but I don’t have facebook

So been Trying to Clone this and i think i am very close on cracking it but missing something cant put my taste buds on it but this is pretty close and still a Really Good Vape Have called it Dark Knight V4
http://tjek.nu/r/jMKx
Bavarain Creaam 3%
Biscuit (CAP) 1.5%
Cheesecake (Graham Crust ) (TPA) 3.5%
Cinnamon Danish Swirl (CAP) 3%
Pie Crust (FW) 1.25%
Popcorn V2 (CAP) 2%
Vanilla Bean ice Cream (FW) 2%
Vanilla Swirl (TPA) 1%

Suggestion:
AP 5% @.75/1% be careful with it, but it might just give it that Popcorn, nutty roasty feeling…

ahh, thought I could find it… here is the place to ask for flavor description of Dark Knight. Most recent post was 20 hours ago, so they are still in business.
5 Mins later, I checked all the posted pics for anything with Dark Knight and searched it FB page and search bar searched, nothing… hopefully they will recognize it and be like… “Oh yeah, that’s ________”

Belay that, I just sent them a message, i’ll report response if/when it comes.

They have seen it, so FB is active, but no responses. I might call them later, their auto response had the owner’s phone #, but gotta match up time zones up. 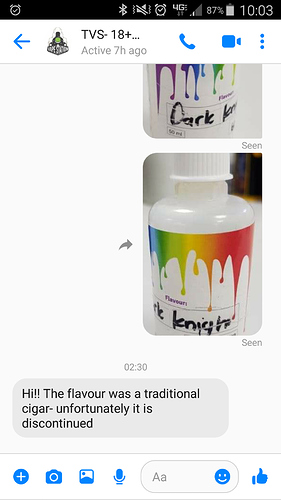