It’s not quite as popular as, and much newer than, DL’s iconic ‘Lemon Tart’ flavour which has countless reproductions of it, as such I’ve been unable to really find any discussion on Strawberry Macaroon, let alone any (attempted) clones.

They sell the one-shot concentrate but I’d consider that as a last resort seeing as how it’s £10/30ml and it’s loaded with sweetener - something I could remove from said recipe if it were possible. 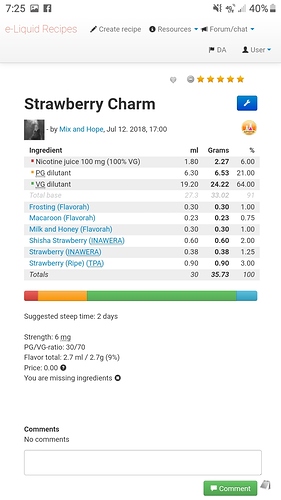 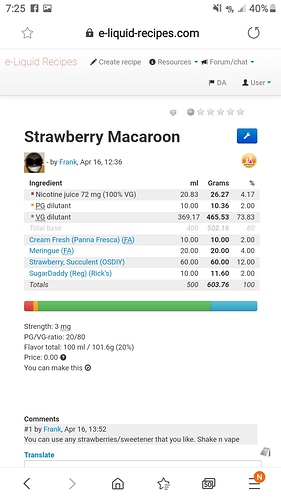 My guess would be the 2nd mite be a bit high in % but I’m not sure. Also never mixed either. Throw a 10ml tester together at least that way you’re not usong a lot of flavors. Good luck

I recently bought a one shot of this thinking that I would love this flavour profile, and as you say their LT is very popular and pretty good (for a commercial liquid). Don’t normally buy pre made juice because, although I like to support B&M shops, they are usually just way too sweet. This is no exception. Their LT although still too sweet for me, is not excessively so for a commercial liquid. This though, as you say is off the scale. I can’t vape it. From what I could taste, I wasn’t overly impressed. I suspect that’s why it’s so sweet. It’s covering up a pretty mediocre recipe. I’ll be keeping an eye on this thread though. Thanks for posting.

Now that I looked at my commercial juice I saw I’d bought the Strawberry macaroon and that reminding me that it tasted like soap. Super disappointed with it could have been a bad batch but I vaped more then I wish I would have thinking the flavor should get better, I even changed tanks and it was still soapy.

Why not do your own and try with a macaroon base e.g. my trinity is Meringue/Almond/Sugar Cookie (plenty of combinations there) all @2% and add a simple strawberry layer CAP/TPA or FLV’s both SB and a touch of Dragonfruit/Lychee for sweetness if you want a commercial go with Sucralose… that’s the way I’d approach it… who knows, might even be better…

Good shout. What brands are we talking with re: the Almond? Same for Meringue (though I’ve found TPA’s and FA’s almost entirely interchangeable). CAP’s Silverline Meringue is pretty dope too, but a way off compared to the aforementioned two.
I’ve got a few Almonds and still not found the perfect way to use/combine them (I’ve got FA, TPA Toasted Almond, (and TPA Almond which is “meh”), as well as INW Marzipan (v. sweet/potent - delicious too but easy to fuck up) as well as WF Almond Cookie).

I’ll explore these further & deffo grab the ingredients with my next order - even though considering Flavorah’s are somewhat on the pricey end, IME their range is a lot more consistently good compared to the more hit-and-miss flavour-ranges of TPA/CAP/FW