i have been using green fairy for a few weeks (new to vaping) can anyone tell me where i can find the recipe for this mix ?
i tried absinthe ,liquorice and sweetener in a mix as they are the flavours i was getting when i vape green fairy ,however the mix was vile and i had to wash the bottle out .

be brilliant if i can get a start of on quantity of absinth to liquorice to sweetener ratio ? also the steep time required .

total newb to vaping and this forum .

thanks in advance for any advise and recipes

Welp. First. Post a link to the juice. Also, share your starting recpie. With percentage used, flavor and company.

For a liquorish flavor is may be anise. I personally like anise FA used at 0.25 to 1%. But watch out at the higher percent, it can take over a mix.

Green fairy is from vapeshoreditch ready to vape .
I think my mistake was percentage i used 15% absinthe

hence the vile taste maybe .
I will try to redo with lower percentage and see what happens 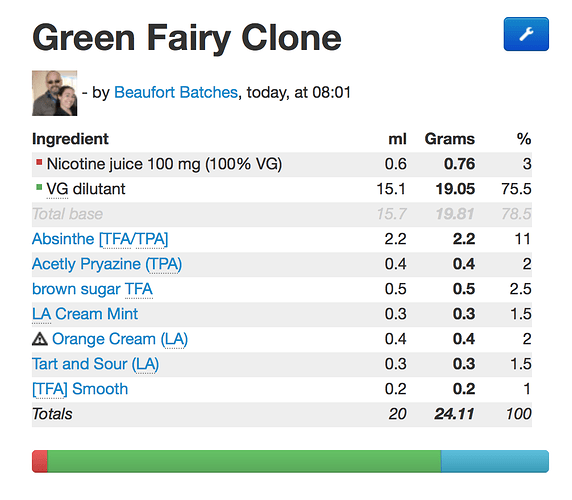 Make sure you let it steep for a couple of weeks, the absinth really mellows out with enough time. I made a recipe once called Irish Fairy, it had 5% absinth and it was terrible until I tried it weeks later. It was a completely different juice.

Thanks for the advise

This is not my clone by the way here is the site that made it http://www.lediypourlesnuls.com/buccaneers-juice-green-fairy/