I know for many who have tried this juice it’s just not their cup of tea. I, for one, could vape it and nothing else from now till Judgement Day. I love it. However, all my attempts to clone this have failed miserably. I’ve only ever found one entry in cyberspace for a clone…and I followed that to the letter only to produce something which couldn’t even pass for a decent slurry in the mountains of West Virginia.

If anyone has ever had this and has ideas on what makes it Tennessee Cured…well I’m all ears. I want to be able to make this flavor and never give JC another $20 bill.

Thanks. I looked at the recipe but have to admit what they’re saying about the Seedmans and Tobacco Absolute is quite confusing. Perhaps one of the people who use these things could translate. The notes are:

I have been using the 10% Perfumers Apprentice (PA) “Cotton Candy” flavor at 16 ounce + 2.5ml of TA, Which is the perfect blen for adding to the Seedman flavoring.

If you are using the seedman premix and not the concentrate then you use approx double of the premix. Anymore than that will dilute the mix and thin the juice to much.

@Jimk Can you help me with this? I don’t understand the Seedman + Tobacco Absolute thing. Since i’m not big into tobaccos I don’t want to wing it.

Hi Sthrn. Wow, Tennessee Cured…a blast from the past! That was actually the last commercial juice I bought. I went 100% DIY shortly after. I was hooked on that & Red Oak Domestic. The local shop stopped carrying the JC brand. Man, did that tick me off…lol. I don’t know why, but I just sort of lost my taste for it. I still have about 3/4 of a 15 ml bottle left. Having to order it from JC is what started me thinking about DIY. So, I started scouring all the sites, looking for a TC clone recipe. I thought, if I could find one, I’ll jump into DIY. I even remember seeing your post, above, in my search, before I ever joined ELR. I ended up doing my own mixing anyway, due to the cost savings alone.

Hopefully Jim will chime in soon. I have a little Tobacco Absolute experience, but I’ve only been using it here and there, for a couple of weeks. I’ll be happy to share anything I can, in regards to it, but I’m sure Jim has more experience with it.

Back with you on this one…

I can see the reason why, so am I… Seedman’s flavoring is really nothing to write home about…at all!

Actually, rating and reviewing the Seedman’s concentrates has completely escaped my mind; the reason is simple. My honest opinion on the Seedman’s, which I’ve tried is…save your money and buy INW, FA, TFA, EF, FLV or any others which might get high marks by others. 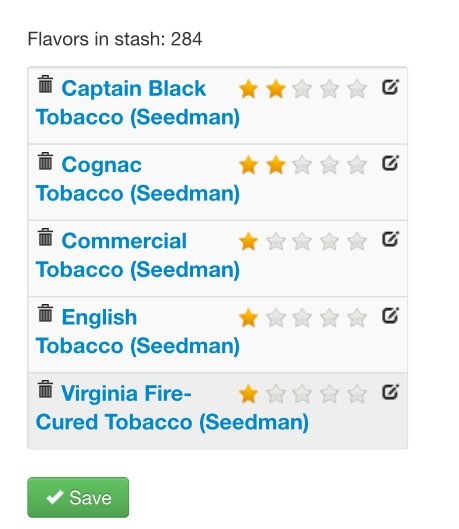 The Seedman’s did not impress me, whatsoever. They are tobacco “casing” flavors (sprayed on real tobacco leaves for flavor) and should be kept as such; weak flavor all around.

On the subject of tobacco absolutes, I’ll reserve my thoughts to that thread.

Let’s say we’re going to make that recipe as stated.

First off, they don’t tell you which tobacco to use; mixers choice, I guess. Next, you’d need to make a stand alone tobacco mix using 50% Seedman’s flavoring in the mix.(remember, I told you the stuff was weak). Now you know why they need a 50% mix of Seedman’s.

The tobacco absolute:
Some absolutes need to be mixed down to a usable 10% solution, because they are shipped to you as a paste or very thick liquid.

Note: The absolutes you get from Inawera are not like that. But, for example, the absolute from MFS or ECX is a very thick liquid (a 50% dilution of the original TA in PG); even it needs to be knocked down to a 10% mix for use in recipes. This is why that user states:

Personally, I would skip the EM part; you can always sweeten the tobacco later if needed to your own level. Typically, 2 drops of a thick TA, like the one from MFS or ECX, is all you need in a 10ml dilution; any more, and it will be overkill. You want an “essence” of the tobacco leaf and that’s what you’ll get if done properly.

Some TA’s are a paste form. These are always mixed down to a 10% dilution. Typically, 9 parts PGA to 1 part TA is sufficient. You can do a PGA/PG mix, but paste TA always mixes better in straight PGA.

Back to the recipe. The next part of the mix is confusing.

"I have been using the 10% Perfumers Apprentice (PA) “Cotton Candy” flavor at 16 ounce + 2.5ml of TA, Which is the perfect blend for adding to the Seedman flavoring. (This, I kinda get.)

Then, he uses 10% of that mix in whatever his unflavored Nic base mix he has concocted.

As it stands, I make a 10% dilution of whatever TA I have and figure out from doing single flavor test batches with that TA at .25, .50, .75, 1%, exactly how much of that particular TA I need in any given recipe. I do not make up 16 ounce batches. Sheesh.

Thanks for the reply buddy. Yeah I decided this was not a clone at all, but perhaps someone’s notes from an attempt to clone. Clearly there is a potential language barrier and possibly things lost in the translation. But one thing is very evident to me having tried to incorporate the supporting flavors to some of the tobacco’s I have…this is not even close to Tennessee Cured. I may have to buy a bottle from JC so I can have a fresh authentic to compare and then try to clone it myself. Because this juice is worth it! Flavor is sooooo good and so unique.

Sounds like the way to go. Good luck on your journey.

It is very frustrating cloning tobacco mixes; finding that exact nuance of tobacco flavor in any B&M or major brand juice. As I have said before, even Alien Visions that made Bobas Bounty could not recreate the tobacco base used in their own juice once the main supplier of their tobacco base closed their doors. Flavor 39 (the replacement Bobas) I’ve read, is no Bobas Bounty!

Thank goodness I’ve never tried Boba’s. I’ve seen clones for it posted and most often comments will say it’s not a clone even if it’s good.