Hello. Two of my favorite juices that I have never seen any clones for are Rip Trippers’ Rainbow Nuggets and his Nana’s Cream. The Rainbow Nuggets is my favorite Fruity Pebbles or Fruit Loops vape, and even based on some of the great fruity cereal vape recipes here, I have no idea how to bridge the gap to get close to Rainbow Nuggets. I am also not a huge fan of most of the banana recipes, but I also really like his Nana’s Cream, which is nothing like the one with a similar name from Bombie’s. Does anyone have a clone recipe or any idea how to get even close to these things? I don’t mind doing some work on them, but I’m not super experienced and I could use some help. Thanks in advance for any advice or info.

I’ve never had Rip’s Nuggets or Nana’s Cream. I’ve had a few of his others though, years ago. I can tell you this… I’m MUCH happier with my own (and other members’ here) versions of similar profiles. I highly recommend trying these two recipes, if you have not yet: @Alisa loopy cereal is the best hands down fruity cereal vape and i love cereal vapes , as for rip tripper well everyone here knows how i feel about that asshole, but @Ken_O_Where makes a good strawnana cream that you may be able to adapt if your only looking for the nana and no straw

I have tried all of those, and they are good. But if you haven’t tried either of the ones I am asking about, then it would be hard to describe what I mean. The Nana’s Cream is like a banana cream pie, and just omitting strawberry does not come anywhere close. And Rainbow Nuggets is even better than Looper, but again, you’d have to try it to see what I mean. To me, it is the best cereal vape that I have tried. I know how controversial RT is, but if the juice is good, then cloning it does not support the guy at all.

Believe me, I have combed through the recipes here, and I have found some great ones that I use regularly, but I would still like to make something that is closer to Rainbow Nuggets and Nana’s Cream and put those recipes in the rotation.

great recommendation @Grubby , i have never had a clone come out exact and from diy aor even tasted an exact replica, i think once people get that their journey through Diy will be more rewarding the different things it may be are alooooot so even the fruit circles or the fruit ring type concentrates are massive have fun with trying to clone @Alisa has done better than any commercial cereal vape i have ever had

I know, I’m just giving a shout to Fizzmustards nana cream as it’s relevant to the title and others might enjoy it

People on here rave about this highly rated pebbles recipe, maybe you’ll like it, I did when I tried it last year; 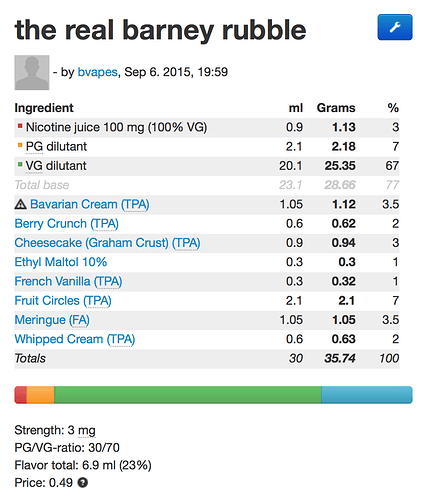 I don’t know what Rip’s Banana Cream’s profile is like, I haven’t bought a commercial e-liquid in around 3 years. I do have a fine ADV Banana Cream Pie recipe that’s private but I’m sure it’s nothing like Rip’s so I can’t help you there.

Also looking for a this Flav also. And a good place to buy all my soy stuffs. Won’t lie complete NOOB. So hook a brotha up yo! Lmk