@Wayne_Walker tried this juice and is interested in a clone, after reading the description…

Rollin Dough is a cinnamon sugar covered doughnut with a creamy vanilla gelato ice cream, carefully drizzled with a nutty chocolate topping. The doughnut is in place of a typical ice cream waffle cone and is a staple dessert in a couple European countries. The dessert has been seen on Reddit’s FoodPorn subreddit and across various other aggregate sites. You’ll initially taste the sugary cinnamon, followed by the vanilla gelato and nutty chocolate. Another complex flavor that will send your taste buds bonkers.

One of the biggest things to me while creating these liquids is that I tamed the use of sweeteners as much as possible. Overly sweet juices wipe out flavoring and create havoc on your coils. These only use enough to enhance the flavoring, not mask a terrible recipe.

It sounds like something I would like to taste, or try, anyone got any experience with this one? I don’t see anything searching ELR Recipe side, but the description is so thorough it seems almost like a complete recipe, but if anyone has tasted it and would gander a guess I would be interested in trying it.

Have not tried it. However there’s a few hints in there to me.
So far Nutty chocolate = Chocolate caramel nut Caps
doughnut well= Glazed or CGD Caps
albeit Frosted Donut TFA has a bit of a cinnamon vibe at the end of it when I have used it.
Vanilla Bean gelato TFA
cinnamon sugar…could be anything CDS Caps or Cinnamon Roll FW , Churro Caps

Sounds like a delightful vape hope someone comes along and can give you some real facts !

As far as Cinnamon Donut, this is a good start. Move a couple couple ingredients around and add gelato might get you somewhere close… 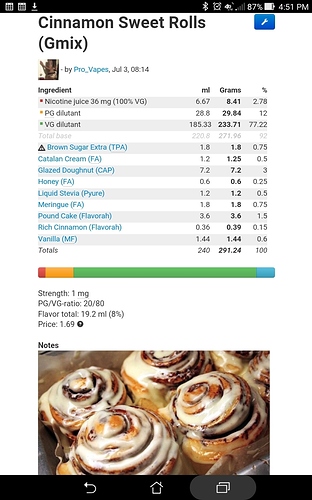 came out pretty good for a random guess, just whipped it together with flavors I had. I think it is a wee bit too much flavor so I’ll do some adjusting. But for a wild guess it came out pretty tasty and unique.

Hey everyone! Jay from Great Falls Vapor here. I was just doing some basic web searching tonight and found this thread.

First, I really want to say I’m extremely happy people are looking to clone the recipe. If someone can get close, all the more power to you.

But I do encourage you to try it at some point if you’re local to one of the shops that carries it.

Good luck though! It took us a lot of revisions to get it to where it is today.

I will give one hint. There is no sucralose used in it at all.

It’s part of my my ridiculous hobby/addiction to try and clone it, I apologize for getting caught and I promise to be more careful in the future

A friend of mine told me good things about Let them vape cake and rollin dough, your great at it.
I hope to get some but of course my local shop don’t carry it. And at $20.00 for 60ml its price prohibitive for us poorer Arkansans. I wish you would consider offering a set of 10 ml samples of your line, but I don’t know if I could afford that

Thanks for the 2 hints

1: no sucralose
2: still very far off

haha
BTW Good going using no sweetener, as it’s usually the main ingredient! I kinda knew my wild guess was going to be way off, but I made something semi vapeable that if I wanted to pursue it could become an ADV.

What’s your local shop? I have no problem reaching out to them. And a lot of good shops will do sales here and there (happy hour sales, random discounts, etc) to help bring the cost down a little bit. I have a 10% coupon code that doesn’t expire posted on Instagram, reddit, and JuiceDB (Insta10, reddit10, JuiceDB10). Any of those codes will work. And I do sales for higher percentages off at different times so make sure to watch for it on the social media sites.

And thank you! I really didn’t want any sweeteners added. They just fuck up coils/cotton and make it more expensive for the consumer. Plus it wipes out your palate to any other flavors that are more subtle.

Keep on up with the DIY though! It’s a fun hobby and how I started!