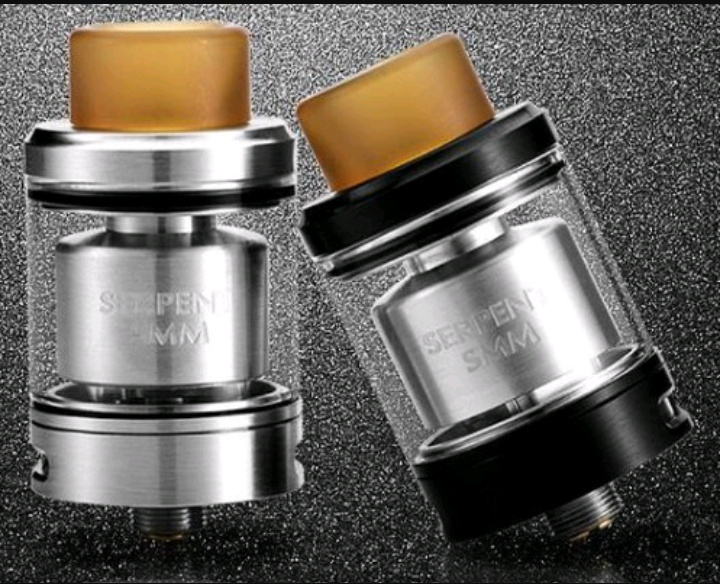 I see Suck My Mod has added his name on to yet another product…The new Serpent Mini
https://www.heavengifts.com/product/WOTOFO-Serpent-SMM-RTA.html

I never used the 24mm Serpent mini but own an original. I love that little RTA even though I have to fill it up every 30 minutes or hour. The new version being 4 mils will be much nicer. I hated the drip tip on the original as well. It gets hot if I chain vape and collects lip gunk like crazy. That problem is taken care of with an ultem tip on the new version. 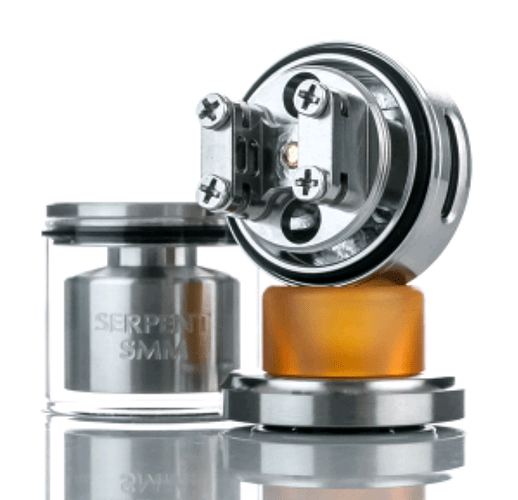 The build deck works close to the same as it always has except with a few changes. Before, there were only 2 post holes to mount your leads. Now they’ve added 2 more post holes so you can wrap coils in any direction (over or under). Bottom airflow remains but I can’t see where it comes in just from looking at pictures. Maybe from the posts?

I like it. Good flavor. Decent fog. I was surprised at how much I had to thin the cotton to get a good long TC draw without having the flavor mute toward the end of the draw. Easy to build with enough room to get a decent resistance out of SS. The airflow is from the posts and is side airflow. The atty competes well with other single coil attys out there right now.

I’ve never been a huge fan of the circle wick holes. They work fine but take some tedious trimming that I hate lol. I loved how the original Serpent Mini was wicked. Super simple imo. What do you think about the airflow?

If you look at the inside facet of the post block, you can see the two airflow slots milled into the center of the block. It’s actually an interesting design, and I’m wondering how the flavor will be compared to the original Serpent Mini. I’ve got the 25 mm version and to be honest, I wasn’t impressed with the flavor. I know a lot of people love theirs, but I just could not get any flavor out of mine no matter what coil or wicking I tried(I tried a whole slew of 'em, too!).

The airflow is slightly restricted in comparison to say a beast. Definitely D2L. It’s a good tank but for a I really like the Ammit 25 in short configuration best. I’m sure that is all about how I’m used to building as I haven’t got scads of time into building yet. It’s difficult to get any standardized process. I have found that everything wicks best when I pull the cotton and do the “Scottish Roll” thing.