Need some suggestions got these 2 I want to mix.up before bed. So
2 sft %'s for these
And don’t 2, 3 .or even 4 % me unless its absolute necessary. I want to be able to taste them nnl I only do 5mls never 10 of sft
For anything ever 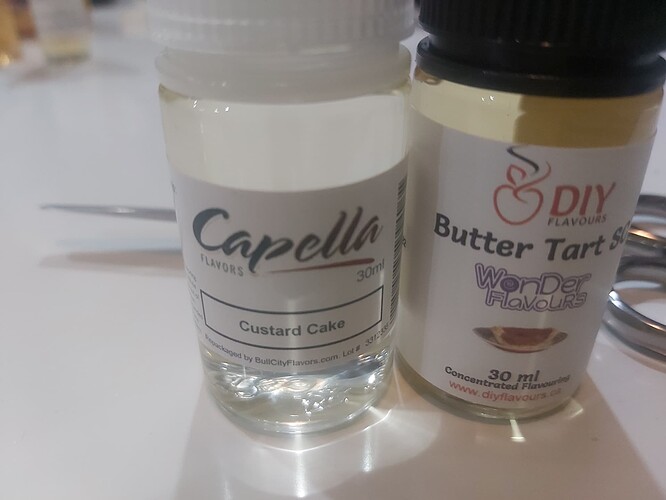 @ladycrooks I’m testing most of the new CAP’s @4%, and the Butter Tart, I’ll have to check on.

Start the Butter Tart off at 2%.

That’s what I did after reading some notes on both 2non butter tart and 4on custard cake any idea on steep times? For either?,that’s what I can’t find out

I went 2%.on the butter tart and 4% on the custard cake

I think we are gonna need to start a thread and call it Lady Crooks Mixing Questions …This way you don’t have to start a new thread for a single question everytime ??? Lmao

Need some suggestions got these 2 I want to mix.up before bed. So 2 sft %'s for these

I think you may have misunderstood the whole point of doing SFT.

I have searched high and low before asking about this. I am trying really hard to get it right. I’m sorry I’m annoying I know,…

@ladycrooks it really depends ON the flavor(s). Some flavors 1.0% can be TOO high. Sometimes MFG suggestions are very off, and you can sometimes go by the average SF % here on ELR, but not always.

I would even consider giving the butter tart a second week of steeping, some people are tasting one of the ingredients as a off note when tasted to early

I have searched high and low before asking about this.

Sometimes, you can start on the actual ELR Flavor Page…

Now granted there aren’t many SF yet, but it’s a starting point. 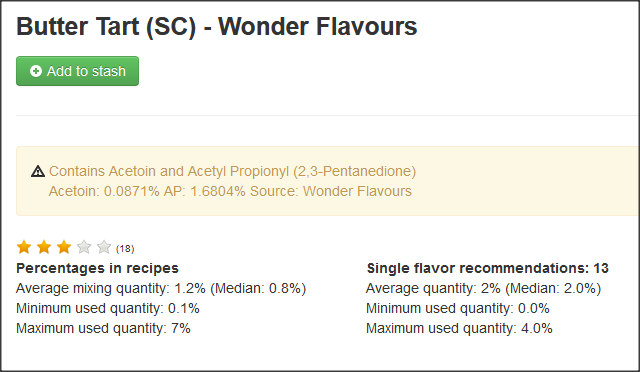 You can see the average is 2.0%, so great place to start.

The CAP’s is an even NEWER flavor, so only 4 SF % recommendations, so your mileage MAY vary …

Again, these are just starting points. Your equipment, setup, and personal tastes WILL also come into play.

I would even consider giving the butter tart a second week of steeping, some people are tasting one of the ingredients as a off note when tasted to early

Powerful tip there @SteveTC, what type of off note were they getting ?

I support that idea of the own thread. Maybe a more generic title would be advised, since I assume there will be others benefiting from the answers.

Use this low and wait some days for the butyric acid to steep out or you’re going to be very disappointed.

It seems the BA is very forward, and at higher %'s it’s got a musky off-note.

I heared about an butyric acid.
I used it only at 0.5% supporting WF crepes with a nice buttery high note.

@ladycrooks there are MANY ways to do Single Flavor Tests. Some people do very few, but do a VERY involved, in-depth test. This CAN included multiple strengths, and over multiple steeping periods. This can be very time consuming, and logistically complex with multiple bottles to keep track of, date, re-test, etc. This is probably the PUREST form of SFT.

I typically do a “One and Done” method, BUT, there are a FEW times, wherein the flavor was very weak, OR, had extremely off-putting notes, florals, perfumy-ness, that made me think I tested it too high, and when that DOES happen, I try to cut it in half and re-test. In the case of weak flavors, sometimes I’ll double the testing rate and re-test.

I actually do a LOT of research, prior to testing, or typing even a single word, in PREP for testing. Typically, I can get a good testing start point, which prevents re-testings.

I’m teasing you …you make it easy lol

Lol thanks!!! I appreciate it…lol guess I am “That person” lol! The one who,asks quiestions everywhere lol!!