Shall we play a game?

Yeah, not any of those… I was thinking something like a monthly Mix the Recipe thread. Ill pick a recipe from a dessert recipe and we post our versions of it. From the minimalist to the complextionist, i know it aint not a word, all recipes are welcome.

This wont be a contest, it is for fun, for learning, for teaching and vaping (of course).

So what do you think? I think it is a awesome idea, and i will for sure follow and even try to throw some recipes into the mix too but i think i will skip this Apple Crips due to the fact that i have no clue what it is and how it should taste.

Sounds like fun. This should inspire the beginner…like me.

I think it would be a fun learning experience for everyone.

I know that it aint supposed to be a contest as such, and should be about the fun way to get inputs and ideas.

However, i was thinking if we could do it so each recipe link posted we aim for should have a time limit, such as an example 24 hours. The recipe with most likes will be the “winner” who get to be the one that post the next link to a recipe. Winner will have 24 hours to post the link for next recipe, if not posted within that time, Ken_O_Where will get the honour of posting the next one?

That way the “winner” will have a chance to actually get some nice recipe or inputs for a recipe that he/she would really like to try as a vape! While i am sure that this would be a great idea i would like this to be for learning and fun, allowing for n00bz, been around awhiles and mixing is all consuming mixers to interact. Cant tell you how many times a new mixer has given me an insight that i hadnt thought of and it will allow new mixers to see the thought processes of mixers who are a bit further along in our hobby.

A month would give enough time for one to mix a couple versions and test them before submission.

But lets gauge interest in your idea as well, i dont see why there cant be more than one type of thread like this. The DIY sub does a monthly flavor thread, always thought it kind of neat.

Newcomers does often think out of the box while experienced got their rutine and will often stick to previous successful approaches.

I’m in! I have been mixing for almost a year and a half but still a newb to flavors lol I got frustrated 6 weeks into flavor Mixing because all my mixes we’re Crap and just vaped my base for almost a year… Now I’m back at and taking it slow… I think this would be an awesome thread and great learning experience for my self and others…

That’s a great idea for the new year!

Ok, this is the best I could whip up real quick. It’s just an idea and I have not mixed it yet but I will this W/E. 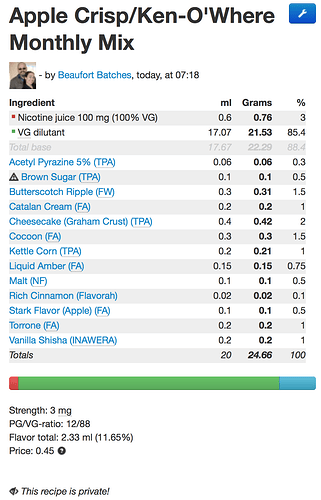 sorry guys. thought originally the apple crisp was just an example. looks like it isnt.

this mess was done in a typical mad scientist fashion. will make this and send it to you @Beaufort_Batches

thought originally the apple crisp was just an example.

It is/was, hehe. That wont stop DIYer’s tho!

so are we doing apple crisp ??? lol