To start my name is Tony Jones and I have been a smoker since 96 I am 37 year’s old and I have been off cigarettes for 9 months now. I quit smoking cigarettes when I got a coupon in the mail for a mark10 ecig device. It all started one day when I got up for work and found a coupon in the mail for the mark10 and 2 cartridges for 1$ each. I thought what could it hurt and it would allow me to smoke in the house, so on my way to work that afternoon I stopped and picked it up. When I got to work I charged it up and put the cartridge on it and gave it a draw it turned out to not be so bad. I Vaped it off and on for the next few days until I had ran out of cartridges. The next time I stopped at the store I bought cartridges again but not cigarettes and I continued to smoke both not noticing that I was smoking cigarettes less and less until one day I realized that I hadn’t smoked a cigarette in 4 days. Right then I decided that I didn’t want to smoke anymore and without having wanted to at all I just threw them away and haven’t touched them again since. Over the next week I noticed that I was becoming a little annoyed with the fact that I couldn’t see how much liquid was left in my cartridges every time I changed it out, so I decided that I was going to get me a device with a glass window so I could tell when I was out of liquid. I ended up with a typical newbie pen device and loved it. Yeah well it lost my love after the first coil had to be changed and it had to be replaced with something that lasted a little longer. So I got me a smok vape pen22 and OMG it was fantastic until I dropped it and broke the glass. I quickly replaced it with another one just like it and loved it for a while. Somewhere around the 4 week period of being off cigarettes and buying Ejuice from the store I was having a conversation with a buddy at work and he introduced me to diy Ejuice mixing. And this is when I feel in love with diy. I researched and studied about it and finally got me a kit. Liquid barn had what I wanted and I ordered my kit. It showed up in just a few days, boy was I happy. I was making all kinds of crap and I do mean crap. It sucked nothing tasted as good as the ones that I got from the store. My mind was jumbled up what was I going to do with all of this stuff. I told myself I wasn’t going to give up and I talked to that same friend at work and he told me about @reklawenyaw and @DIYorDIE on YouTube and said watch these videos you will learn if you listen and do what he says and so I did. Now don’t get me wrong I love liquid barn but I branched out to tfa, fw, cap, etc, for new flavors. Keep in mind I’m only about 2 1/2 months from when I quit smoking. With my friends help I hit @BullCityFlavors and @nicotineriver up for about 25 new flavors and Wayne walkers videos and BAM I made my first good tasting Ejuice. But right about then I heard about some FDA regulations that could stop everything I was doing and I just couldn’t have that. I went everywhere inside a 40 mile radius of my home and found everything I needed to vape except nicotine. Just in case things did get bad for diy mixing. Well I decided I was going to become self sufficient and stock up on everything I was going to need! 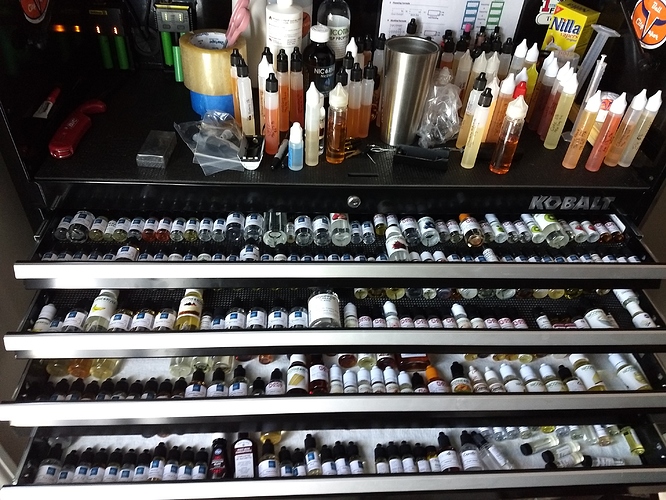 IMG_20170921_160019907.jpg2851×2138 1.67 MB
And this is what it has turned into. Plus about a gallon of nicotine and 7 gallons of vg. There are a bunch of people who might think I’m going overboard with it but I look at it like this. If we do get regulated out of existence then at least I can keep vaping for a while and don’t have to go back to cigarettes. That’s the jist of my vaping story that is still being written and thanks to people like @GalacticResidue and @Cutlass92 and many many many others I am making good Ejuice now and actually making a little side cash. Thanks everyone for all of your help in my journey and remember together we can put the screws to the big box guys (big tobacco) p.s. any ideas on how to better organize my stuff 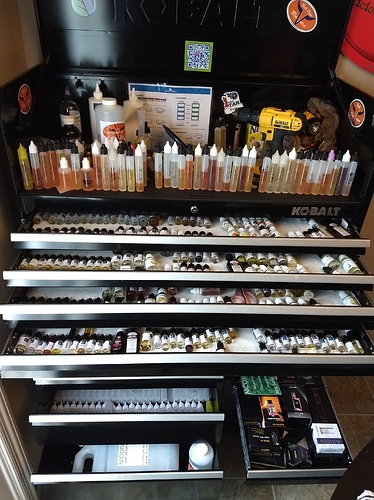 Thanks for the recognition, you are way more organized than I am! I really like the tool box! I will say I store my finished juice in ammo cans because they are air tight and dark.

any ideas on how to better organize my stuff

Already looks pretty organized to me.

Thanks, I just feel like it takes forever to find the stuff I’m looking for because all my stuff is rolling around. The paper towels helped with that and alphabetizing helped the most but with all the different brands and similar flavors it just seems completely unorganized but thank you anyhow

All 200 something of mine are stuffed in labeled Ziplocks in a 3 drawer plastic thingy. It’s sometimes a pain to find something. Seems like some bags fill up way faster than the others. One day I will get organized… think I said that a couple of years ago

Ah ya keep up the great work! Also thx for the shout out homie! Always here to help out!

any ideas on how to better organize my stuff

Erm…Considering the fact that my mixing gear is relegated to two plastic bins that I have to lug through the house for a quiet, cat-free surface on which to mix? I’d have to answer a solid “NOPE!”

Seriously, that is a great idea with the toolbox! Guess I’m going to search some garage sales! I love to mix, but having to search for 15 minutes for all the concentrates makes it a damned headache. Hell, the last time I mixed it took me two days to make 10 bottles of juice!

And you are a slob. You forgot to add that in. Just joking. Have a great safe holiday weekend brother

You know me so well! You have a great weekend as well!

Glad I’m not the only one. I have almost the exact same situation because I have no space. It’s all by the desk I do my mixing on, but it’s in plastic drawers and bins all stacked on top of each other and lugging it all out is kind of a pain. I have to clean off the desk and declutter so there’s space, figure out where to put everything, blah blah blah. It does put a damper on the joy of mixing.

What is the story behind how you got into diy. Also thanks for the kind words on my set up, I just got into vaping and diy pretty much at the same time and I feel like I am playing the catch up game with all of you. It took me a while because I told both of my younger brothers that I didn’t like vaping cause it didn’t feel like a real cigarette. When I finally did start vaping I ended up only using the mtl ecig device and method for a couple of weeks. I think what kept me vaping after that change was the great flavors in the liquid. That part comes from my wife’s part of the story. She got a fruit loops flavor from @availvapor and I was completely floored by how good it was. Anyway I just like to hear about other people’s triumphs over things but mostly one of you could be holding a very inspirational story that could possibly be what helps someone quit smoking or turn to diy mixing and save a bunch of money.

Here I was, seeing everyone’s carefully laid out “mixing corners” and thinking I was the heathen in the group! Binned mixers, unite!!!

Being that organized would take the fun out of it! 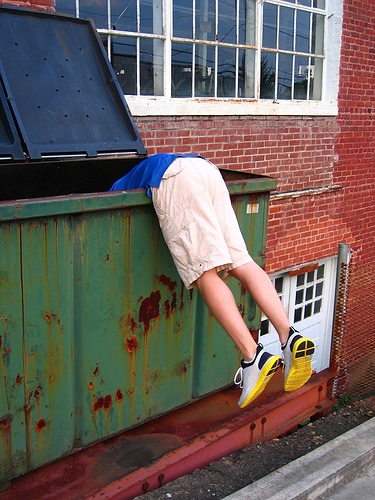 Now, where the hell did I put that Fizzy Pineapple Banana?