I was curious on just how long the components of my liquids were considered fresh and was surprised to learn just how short they are. And the apparently undesirable practice of having a big stash. I personally will be getting some fresh items with my stock now being at least 5 years old on many items. My Nic is in good shape being frozen at 0°f in a vacuum.
According to Dow Chemical, PG USP/EP has a shelf life of two years when stored below 40°C (104°F) in closed containers away from sources of ultraviolet (UV) light. VG has a very limited shelf life, and again according to Dow Chemical, given its severely limited shelf life, extracts made from Vegetable Glycerine typically have a shelf life of 14-24 months.

You can download and read the guidelines on flavors from TPA here :https://shop.perfumersapprentice.com/flavorsworkshop/shelf_life.pdf
In a nutshell both freezing and heat can quickly break bonds within the flavor compounds. The file has good instructions on storage using glass bottles without rubber droppers.
It does lead me to question the sustained heating of e-juice to “steep” it. I’ll stick with cool dark places and patience with my steeping. Best regards, Craig

I could not be more pleased to see Flavourart and Inawera label the dates when their flavors were bottled … and I think TPA and Cappela should follow this practice! a little transparency of your products with the consumer, it was not too much …

t does lead me to question the sustained heating of e-juice to “steep” it. I’ll stick with cool dark places and patience with my steeping.

Tried many times to sway new mixers away from heat steeping. They’re too impatient, but then they wonder why their juice doesn’t taste good.

After you read that article it’s hard to justify heating the finished ejuice both in regards to breaking down the components of the flavor and the nicotine. The same goes true to using those small handheld frothers and even shaking to add too much air that liberates the flavors aromatic compounds. It makes the use of slow magnetic stirrers look very attractive even considering their prohibitive price.
Unfortunately there are many that will still hold on to techniques of making juice with negative results in the face of scientific facts. Worse yet they promote these means to beginners who do not know of the wrong things to do.

a little transparency of your products with the consumer, it was not too much …

To be fair, TPA/TFA is one of the most transparent companies out there when it comes to their flavorings. Neither of the others mentioned have component listing for each flavoring. And if you buy direct from them the flavorings come with Lot #s which contain manufacture dates. 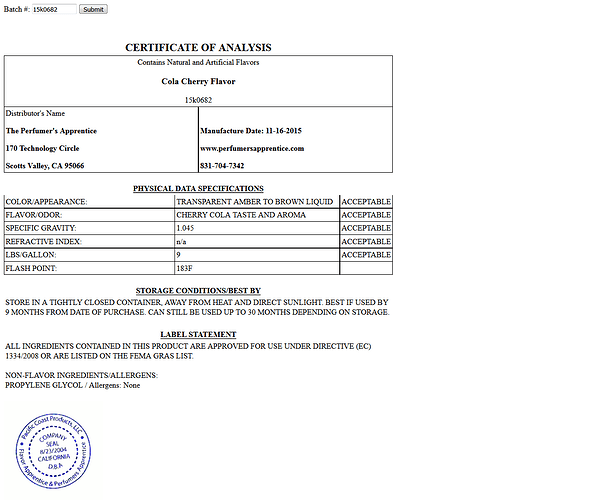 @craigtalley Length of storage relies largely on how you store them. All of my 4oz+ flavorings get put in glass bottles with proper caps, some 30-60ml flavorings do too. Everything under that is cheap enough to replace or gets used. This is where single flavor testing can be helpful. When you first get the product test it, write notes and then make sure the match up down the road. I have had very few flavor go “bad” but it has happened. Yet some flavorings seem to last for every if stored properly.

Years ago i did testing on heat curing, ultrasonic cleaners and time. I wrote out a nice little post on reddit and answered questions and still some of those folks went on with heating. Sometimes people have to make their own mistakes, im one of those people. In fact i did this testing despite being told by several people, including a local shop owner, that heat curing can break some down of the flavorings.

Now i mix, shake and shelves my liquids for a month minimum but from time to time i will test something right away by using heated VG to help speed up homogenization.

Of course not everyone will agree tho. There are some long time mixers that swear by their heated stir plates.

Don’t know if I’ll let it sit for hours heating and mixing. But what I want it for is heating the vg up enough to thin it for mixing … usually a few minutes in hot water does this trick … but that’s a lot of trips to the k-cup.

Then the o nic premix sits in big 500ml bottles on the shelf. Until I ready t make a 30 ml bottle

I tend to think the it is not heat it is high heat - thinning vg mixes by heating to 40 - 50 c is just outside natural heat ranges (unless you store in a fridge) I cant see any issues with (YMMV).

We had a mixer come into the old IRC chat a year or so ago, he was also a chemist. He said if it is sealed everything would be fine but i have seen people mixing in open beakers at sustained high temp, to me anything over 110F* is too high. Not only will our delicious molecules escape but VG is a pretty dern good desiccant.

What we need are some chemists to start vaping and join the forums, i would love to be able to ask questions directly.

Ya someone with a gas chromatograph in the basement would be super handy. I have a lot of questions I would love to ask a chemist.

Tried many times to sway new mixers away from heat steeping. They’re too impatient, but then they wonder why their juice doesn’t taste good.

NEW MIXERS come here to seek advice of experienced users, so i highly doubt its a new user impatient issue

I am a diabetic. I was introduced to these flavorings, particularly Cap and FA, long before I ever vaped them. Probably before vaping existed in the early 2000’s. They are used in cooking, baking, candy making including sugarless and have helped save many lives by helping people deal with health issues… Diabetics, and many others including plain obesity. Redundantly, cooking, baking, candy making. Can any of these be accomplished without heat?

Edit, I did not mean to respond to lexie and hit the wrong reply. Sorry.

Most of the e-liquid flavors have preservatives which are to give them a longer shelf life and are diluted making them unsuitable for safe e-liquid creations of your own. Capella Concentrates are made with the best ingredients possible of the highest quality. There is no added sweetener, caffeine or other types of flavoring that are not honest, just pure concentrate that is not only safe for vaping but also safe for use in foods.

These are great for people like me who can not survive (literally) high carbohydrates or sugars (same). There may be others here who could benefit from using these in foods. So this hits close to home and makes it real hard to stay silent.

Doubt away Lexie3. I’ve spoken with several, in person, just getting into DIY. There appears to be a trend in my area with the idea being quicker is good enough. So when I’m told time-steeping takes too long, then it’s fair to say that qualifies as impatient.
Not worth the energy debating it with them. You can lead a horse to water but ya can’t make 'em drink.

Sure heat is probably required for candy and such. I don’t know as I’ve never done that. But if we’re discussing the application of heat in e-liquid then it becomes a different playing field.

This reminds me the of a line from Shakespeare,

To heat or not to heat that is the question !

Me , personally when mixing 0 nic flavors I do heat up my mix enough to thin the VG.

To me this aids in the blending of flavors in the mix. Then they sit in 500 ml bottles on a shelf until needed .

Some flavors after adding the nic need to sit and steep for a week others don’t.

and Mr Miyagi “ Heat On Heat Off”