Should I go by the average or the median percentages

Was mentioned here Average or Median? that perhaps he would work on how the #s are reached. This prob do for a healthy merge as well.

you have issues…check them out

BTDT… been there done that… I do this to see if I can take your comments as credible. Everyone has a right to an opinion… that doesn’t mean I believe them all…

You just have a uncommon history and it makes me bit cautious about your opinions. I have several 5 star ratings myself, but zero on day one of any recipe I’ve released… I like honest ratings or comments from several different people… good or bad. IMO that how the ratings and comments section should work.

Back on topic, neither

A good place to look is in the recipes for that flavor, you can recognise the mixers you trust and compile their usage to get an idea about a flavor.
Steam and ATF are a couple other places I look.

The median is usually more accurate in terms of how most people would use the flavor. It’s also most helpful to read the notes because you may find people explaining how they used it, a top note, for body, for accent etc. When you’re looking for how it’s used in a recipe, also look at the recipes bar to see how people are using it in similar type recipes. Your flavor + fruit might have a different % than your flavor + bakery for example.

a beginner is not trying to make one shots or stones,he/she tries to figure out how to use a flavor.

I’d guess that 75% of beginners posting recipes here are copying or adapting someone else’s work. And of those, many can’t be bothered to actually sit down and (gasp) test individual flavors.

The median is usually more accurate in terms of how most people would use the flavor. It’s also most helpful to read the notes because you may find people explaining how they used it, a top note, for body, for accent etc.

As @Mizzz_Z_Hobbit has noted there is so much info to be gained by viewing flavors, notes, recipes, recipe notes and more…

All the info you most likely will need can easily be sought if you can master this tool below… Considering the flavor notes pages have a history that’s equal to the entire life of ELR, you pretty much can find any flavor used in diy and info from every user that contributed to that data base. IMO it’s the most resourceful diy eliquid database on the internet period. The sheer amount of info in the ELR Flavor Pages is something I find to be unique to ELR…

The purpose of this post is to familiarize new folks to DIY with the ELR Flavors Database. There are many things a person should know prior to starting DIY E-Liquid – things that will help them maximize their investment in time and money, as well as avoid costly mistakes and wastefulness. ELR has a vast amount of information already which should help in this regard; and a little time spent doing research will reward a person by helping them bypass a lot of the hands-on experimentation necessary …

I really don’t like the comment I’m about to post , but I really felt something funny about the way you suddenly popped up with very strong opinions, so I took a look into your history on ELR.

enjoying a cup of coffee this cloudy afternoon and thought "what the hell?"so,i took a look into your history on ELR.So,i really don’t like the comment i am about to post,but i found it quite funny and amusing that you have rated all your 2018 recipes(i was really bored to go on previous years) with a 5star rating.
So,before judging others,first look at your mirror and ask yourself if this is fair


Don’t forget that i just said my opinion on a thread started by a beginner mixer.on the other hand you showed up ready for a fight for no reason.At least my recipes are rated by people i know,communicate with them,exchange opinions on recipes and in 99% of the occasions,they have tried my recipes long before they are published.
If you want the rating system to change i 'll be the first to vote ‘YES’
2 Likes
Pro_Vapes September 12, 2018, 4:07pm #21

As for me rating my own mixes I feel they deserve a 5 star (from me) in comparison to other supposedly 5 star mixes I’ve tried. If anyone rates it a 5 then I hope they are being honest with their ratings.

The suspect activity I speak of is that not only is your clique/group propping your mixes, you all rate each others mixes the same way on day 1 of each recipe release. That is clique-ish activity IMO. I don’t have anyone just following me around and dumping a 5 star rating. Just admit that no matter what either of you make you all are going to give it 5 stars on the 1st day of that recipe release whether it deserves it or not. 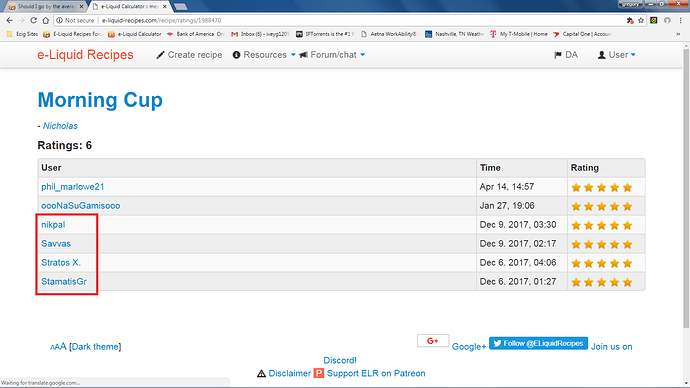 Before this goes on ad infinitum and the back and forth eventually kills the thread completely, I think it’s a fair observation that @Pro_Vapes makes in regards to the ratings. It also highlights a major inherent issue with a rating system- intentional abuse. @nikpal, as for the part about just giving your opinion on the original topic, that may be true but it came off sounding like a putdown, claiming that no sane person would mix at a certain %. Clearly that is a stone recipe with the VG and PG element removed. I could see how that comment could be viewed as a bit aggressive.

Like a bad burrito, this too shall pass. How about continuing the disagreement in PM, or just dropping it? Group Hug!!!

english is not my native language.sorry if my answer to the first post looked aggressive,this was not my intention at all

1)i am not a member of this group for 11 months now 2)i am still a friend with some of the group members,5 of them to be exact.3)none of us has ever rated his own recipes.4)i don’t want to be impolite,but i really don’t give a shit about my recipes been 5star rated,simply because i only do this as a hobby.5)I am done with this argument
@Steve-o_54 i am sorry…

I am done with this argument

Just be sure you aren’t done with the place totally. I’m sure you have some good info and experience to share.

You’re absolutely right! Thank you so much for pointing this out! I’ve always gotten those terms confused. I’ll fix it in case anyone reads that and doesn’t get a chance to keep reading down this far.

Edit - Wait, I googled this in case there are other math terms that might help and now I’m not sure.

Explains how to compute the mean, median, mode, and range of a list of numbers.

I’ll leave further opinions to anyone that want to view your history at ELR and draw their own conclusion.

I don’t know what you’re talking about @Pro_Vapes, I didn’t see anything out of the ordinary …

@daath
Is there a chance that this has been accounted for already in the way the database polls recipes (and more importantly *are ‘stone recipes’ included in these polls)… Or does this observation present an opportunity to help improve some of the numbers being skewed (if this wasn’t already factored in?

EDIT: I should remove outliers, but it’s just pure average…

English is not my first language, so I use !!! in the comment section so I can 5* rate my buddies mixes. Effing brilliant. The other method of finding a median is to sort the data smallest to largest and pick the middle number, or the mean of the 2 middle numbers (for an even numbered data set).

The way we applied it in surveying was get the data, remove the largest and lowest values, then mean all the other data.

IDK why the average of all the data, and a median without the outliers removed would yield different results if the median is just a mean.