Show recipes adapted from a recipe

Been looking, but haven’t found that ‘Show Adaptations’ yet. 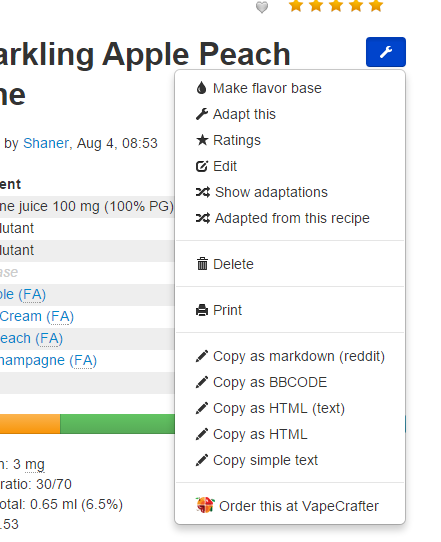 haven’t found that ‘Show Adaptations’ yet.

I have. I made an adaption of rocketpuppy’s RY4 and there is a blue wrench under the recipe that says, adapted from this recipe. When I click on that I go straight to rocket puppy’s recipe.

Nice one @daath, thanks!

That one I didn’t see yet, great.

Wow, that was fast! You rock! Thank you.

That one has been around for a long time, but the one Shane shows up above is the one I couldn’t find.
Oh well… it’s all good now.

That one has been around for a long time

Seriously? I have never seen it before

Cuz Lars just made it easier to see.

The light blue arrows under adapted recipes has been there for awhile, but the option in the dark blue wrench that says ‘show adaptations’ or ‘adapted from this recipe’ is new.

This topic was automatically closed after 7 days. New replies are no longer allowed.