Anyone have one of these
They look like a nice one The look is really nice
Wondering how it feels in hand and performance
With regard coming was thing of getting one
Maybe from here
Https://www.elementvape.com/sigelei-213w-tc-temperature-control-box-mod?enter=true

I picked one up a couple of days ago. I’ve had good luck with sigelei in the past. It’s pretty straight forward to operate the settings, it’s a LOT smaller than the snow wolf 200w I was using before. feels great in my hands and looks great with my griffin 25mm on top of it. if I had any cons at all, it would be the fire button could extrude a hair more but otherwise I love mine. Elev8vapes had them for 79 but are sold out. VapeNW has them for 99 at the moment and in stock.

I can’t speak for the gold one as i haven’t seen one. I have the gunmetal/carbon fiber one and it looks every bit as class in person as the photos. I have an old Sigelei 150 that has been bulletproof. I have no doubts this one will be any different only better

I don’t have it yet but it’s on the way from eciggity.com and I so can’t wait

It’s working pretty good for me. I like the compact design.

I havnt jumped into complex settings. Simple as everything on power mode. Just don’t forget you have a preheat setting.

As for tc. Not too deep into that. I just started learning to build coils so I am behind on tc mode settings and thankfully you can rock ss316l in power mode…if you are Atleast being responsible on how high you are running the vape

Probably be all power mode
Thanks 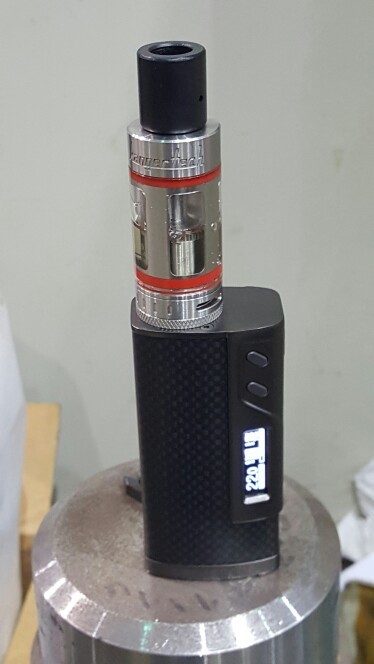 It’s a sexy mod for sure. I can say I love it over other two battery mods this is the only one I have. But I sure love the small form factor it has.

Oh no here they are I paid 79 for the segelie 213 and 2 lg batteries
From Vapenw
Here is link
http://vapenw.com/sigelei-213w-box-mod

It says 79.99 but when you click on the options it’s 20 more for the gold and the gunmetal. So then it’s 99.99. Then you can also choose the new one that looks the same calls the fuchai 213 in diff colors. Maybe the price just changed in last couple days since you ordered. But check your reciept and see if you paid 79 or 99? Thanks so much for getting back to me

I had a Sigelei 150 non TC mod. That mod will last until the end of days. It was my first dual 18650 mod. I have dropped it onto concrete floors 4 or 5 times. In the parking lot a few times. 2 tanks have been destroyed on it during this clumsyness. I have come to realize I was so confident in its durability I just didn’t try to be careful with it.

But, since I first got into TC I have preferred iPV’s TC over the Sigelei. The Yihi chip simply does a better job I think at guestimating the resistence of the coils as they heat up.

But I just watched a video of this 213 mod and they were boasting some interesting info that had me hoping Sigelei is finally stepping up their TC game. I wish I could find it again.

But here is something I just found on Sigelei’s site…

The TCR temperature mode with Sigelei 213 is not accurate.
The Cause:
As Sigelei we have designed a more accurate way to temp control in which the functions is similar to the TCR on other product. Our liner temperature control is based on Fahrenheit units which in form has a higher level of precision compared to the common TCR which is celsius unit based.
Solution:
1.We have created a tool to do the conversion for you to turn the celsius based TCR values to our Fahrenheit based TCR ( Liner Temperature Control) values.The tool will be available on the Sigelei official website.
2.To meet market demand of some of the consumers,we will launch the Fuchai 213 version of the device which uses the more common Celsius based TCR calculation.
3.With the reduction of precision down to the current TCR market standards we will be able to launch the Fuchai 213 at half the cost of the Sigelei 213 model."[/quote]

I particularly like this sentence: “As Sigelei we have designed a more accurate way to temp control in which the functions is similar to the TCR on other product.”

So they are claiming the TCR setting is not accurate, then go on to explain that the way they have designed their TCR to work is more accurate. Then say they are releasing the Fuchai model with even less accuracy.

Maybe Sigelei needs to just stick with non TC devices. I will be very curious to hear some comparisons to other TC devices. Because I have steered clear of Sigelei TC mods because they don’t do TC well. But I have always felt a bit sad because my Sig 150 is like my first love. Which is funny because I just gave it to the first girl I ever dated which was nearly 30 years ago. That and Sigelei mods just look cool as hell.

@Machinist2 obviously bought the Fuchai. When you click the dropdown they have one listed as the “213”. The other listed as the “Fuchai 213”. The TCR of the “213” is based on Fahrenheit which Sigelei claims is more accurate. The more common use of Celcius is less accurate and therefore cheaper to produce. And that is what the Fuchai uses. Guess I did get a steal of a deal The 213 is the better mod according to Sigelei. I may have to grab one just to compare to the iPV TC.

There was like 2 days that device showed as a pre-order and in stock. $79 would’ve been the pre-order price (20% discount). Bet you just lucked out and hit that little window in time. Nice grab if that’s the case! All the reviews I’ve seen so far say it’s a fantastic device. I’m going to grab one soon, just wish I would’ve caught that price though. I was shocked how tiny that device is in real life.