First and foremost let me say that I’ve almost (I can’t recall when I didn’t) purchased my batteries from illum.com. Honest and reliable… until the other day when I was undecided if I wanted to purchase some 21700 batteries and a charger for them.
I use a Nitecore D2 and have been using 18650’s but with a new mod coming in (that can use a single 21700) I decided it was the best option to get a couple with a charger designed for them… this would preclude me from unmarrying a couple 18650’s that have been happily chugging along. I did a few searches and while prices for the charger I wanted (a small 2 bay) and a pair of batteries were about a comparable price elsewhere I setup an order at illum, at shipping… the cost was going to be just under 14.00… it looked really odd, pretty high shipping I thought, so I removed the batteries from the order and the cost dropped to about 5 dollars… I cancelled my order and stewed about it overnight. I really wanted to start this new device with it’s own batteries since they were single. I went over to IMR Batteries (who had the same charger and batteries I had been looking at) and loaded the same order up. Shipping came up to right at 6 dollars. Now to be honest, IMR was going to cost me 1 dollar (basically) more for the products but 8 dollars less in shipping costs.
I couldn’t believe the shipping illum was trying to stick me with… at least that is how I felt about it anyways…
As an aside the batteries are/were Samsung 21700 40T and the charger is a XTAR VC2 Plus

I chose USPS 1st class and it got to me from California to WV in 4 days, and an order from VaporDNA ordered the same date within minutes has yet to arrive took them 3 days to print the label,

Thats the game you have to play. I recently ordered from illumn since they have free ship’n on $50 where the other 2 top us vendors (Imr and Liion) do not. So you really have to figure out how much you are spending in the end. In your case it is cheaper even tho you paid more per battery. Wish i got a new charger too tho, really tight shoving these 40ts in a nitecore d4.

really tight shoving these 40ts in a nitecore d4

yes it is,I bought the XTAR dragon VP4 Plus Charger LOVE IT and plenty of room for the 21700

really tight shoving these 40ts in a nitecore d4.

the positive ends of the battery aren’t getting pushed in? 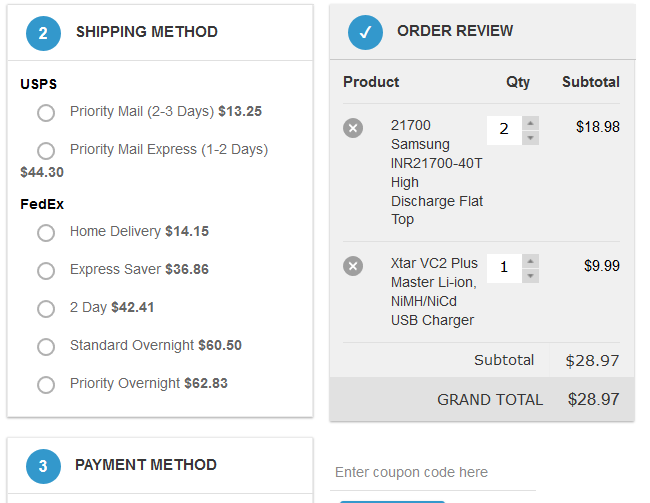 What’s the big deal? You don’t like their shipping rates, shop somewhere else… it’s not like they’ve mistreated or defrauded you.
I honestly thought I was going to read some juicy story about batteries and chargers here but TBH, I’m a bit disappointed to see you just don’t like a company’s shipping rates.

Or am I missing something?

yeah… your missing that I am not here for YOUR entertainment.
Sorry you didn’t get some juicy story… hey… maybe ya feel defrauded! kewl…

I did think it a bit funny. I just got in my battery order two days ago. But I opted to spend to the level to get free shipping.

Yeah, my “problem” is (just to name one), I really don’t need much more in relation to batteries and such to of spent more. It just irked me that the cost jump such a degree for the batteries (when I know it hadn’t done that in the past). Then when I check at the other site to see if the same thing was going to occur (jump in price due to batteries being shipped) it just really got this old goats goat… lol.
Thought I’d comment upon it so others could watch their orders… I’m normally the person that just goes and hits the order button, but it just looked odd.

That shipping price IS weird. It cost me 10.75 to ship Ottawa, Canada from illumn just a few months ago.

Same reason I stopped shopping there also. Bought some battaries and didn’t give them a go right away. They were dead out of the box but because I didn’t check them right away…

I was quite pissed and never bought another battery from them.

I’ve purchased 6 21700’s off them so far, when I received them they basically had no charge (I didn’t measure that they were completely dead but the charger acted as if I was placing a discharged battery into it) but I had no issues charging them.
Additionally for those wondering about the Nitecore d4 charger and 21700 batteries… the charger works just fine charging 21700’s. You do have to place the batteries in and the slot will be at it’s max but I didn’t have to fight to get them into it. The 2 bay Xstar charger I purchased does charge the 21700’s faster though.

I’ve purchased 6 21700’s off them so far, when I received them they basically had no charge (I didn’t measure that they were completely dead but the charger acted as if I was placing a discharged battery into it) but I had no issues charging them.

Mine charged also but when I put them in a mod they were “dead” It was strange to say the least and I made a video of it also but IMR pretty much told me I was SOL.

Yeah, I “might” not buy from them… Prior to my last order I accidentally had placed the incorrect batteries in the order (21700 50E) and immediately contacted them to cancel the order and was told sorry that all sales were final. Yeah it was my mistake, but it did display a genuine customer no service type of business. I would have understood if shipping had occurred and I did tell them I understood I would be penalized a restocking fee, but was basically told to stick it.
Like I said, it was my own fault for not actually double checking the order I was placing, but I hate tossing 35 bucks down the drain like that.

Right? Their customer service is horendous. I even went on all of my social media and told the world about it. Not that the world listens but I think people should know about horrible service. They could have easily cancelled that order for you but they decided to lose a customer instead. Idiots.

I received 6 Samsung 30Q’s September 10 2018. I am already looking to replace them. These batteries are in a rotation in which they are only charged twice a week…

Feeling like they should include a dab of vasoline with every order.

Now that makes sense, was going to order some batteries from Liion but the shipping was ridiculous. I have ordered from them in the past but never saw such high shipping prices. Didn’t know about the new USPS regs so thanks for the info.

For those in the states, I recently got a great deal on a few sets of Molicells 20700 for $3.49 each from 18650 battery store, I think they are out of Georgia, and shipping was on the cheap side like $4 for 6 batteries that came with plastic cases, and I ordered a 3 softshell zipper case’s, and a bunch of wraps and insulators… they all charged good and seem to be good, I wouldn’t think twice about using them again, and they were much faster than most, had a shipping label printed in a few hours, even though it took them 48 hours to get it to the post office still not bad though. al on Tuesday came Saturday, didn’t have to contact them but they seem to be on the up, I have used IMR, Lion, the most but these guys did a great job by me. Had some good deals on charger’s too, just a FYI, I know many are very loyal to battery companies.