These are pics from the Cranston Fire in Southern California. These were taken in the parking lot of my office in Palm Springs.

Before. This was during the humid week from hell last week: 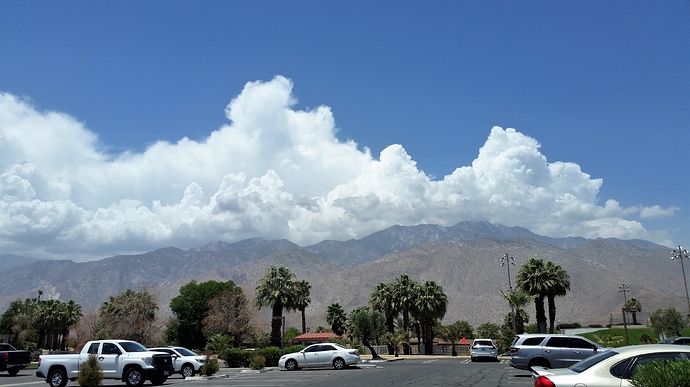 After. This was taken yesterday at lunch time: 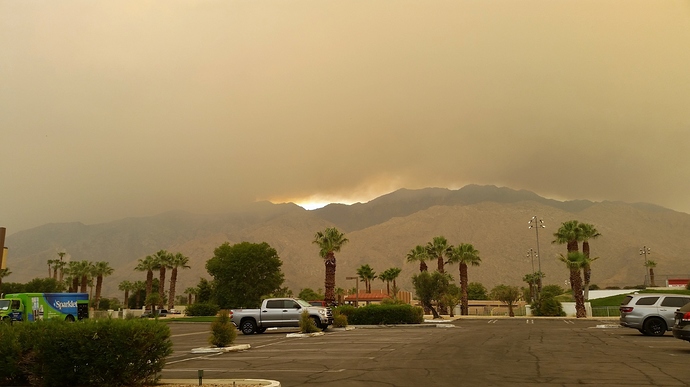 There are currently 14 states undergoing massive wildfires. Be safe everyone.

Wow, i hope you and your family are safe. I do miss living in So Cal but, i really don’t miss those fires.

Thanks Robin. We’re in no danger of fire. It’s too far away. The smoke and heavy air are another matter though, but the wind has shifted and it’s much clearer overhead but you can still see the smoke in the distance.

I haven’t been following this on the news like i usually do. Have any homes been damaged ?

we just had a small fire here in anacortes , it was big enough to have the helicopters dumping on it

Be safe brother. Those small fires have a way of growing up quickly.

Yes, but I’m not sure of how bad the damage is. The fire near Redding is far far worse. It was thought Redding wouldn’t be harmed too much but I heard the wind is shifting and driving the fire straight towards it.

Best of luck to you guys over there!
Now, (sorry can’t resist) here’s what’s likely to prove an extremely dumb question from a curious Brit:
Those are clearly same palm trees as in the previous pic. but the fronds now look considerably shorter, as if the trees have protectively drawn them in. Huh? Can they do that? or am i looking at the result of smoke damage or something?

There was a week between pics. They were probably trimmed. Palm Springs is big on appearances so they keep them trimmed to pretty up the place.

They were probably trimmed. Palm Springs is big on appearances so they keep them trimmed to pretty up the place.

Ah, of course! But they’re not pretty. They used to look like trees, but now they look like feather dusters!

. They remind me of the pollarded Plane trees in our British towns, which are even uglier, actually Once they get their greenery back, they look like row apon row of drum sticks. It’s a very sad way to treat these tall, stately forest trees; but at least they don’t pretend that they’re "prettifying " them , just trying to stop them growing too tall. (So why the heck don’t they just plant smaller trees in the first place?

So - I’m clearly the weird one.

Never thought of that but you are right. The trimming has another purpose as well. As the fronds die, they fold down and form a skirt of sorts. The skirt them becomes a perfect nest for birds and the nest becomes a perfect place for rats. The dried fronds have some pretty long spikes and if they fall in the wind and hit you on the head or face you can have a bloody mess in your hands. Personally, I hate palm trees. They don’t really serve much of a purpose unless they are date palms. I got rid of the ones on my property.

I agree, but out here in the desert it takes a lot of water to keep anything alive. I have desert landscaping. Which translates to…sand. I tried creeping thyme but it died quickly. During the summer I can sit inside my house while my neighbors are mowing their lawns in 115 degree heat and 30% humidity.

Woke up to smoke filled skies here this AM. The fire in Redding is going absolutely nucking futs, and I knew the smoke might get down to us(I live about two hours south) but with the weird weather patterns being created by the size of this fire, it’s pushed a slew of smoke south towards Chico. Getting flashbacks of 2009 when my little town was threatened. No bueno.

Stay safe. That air can get really nasty to breathe. I have family in Woodland luckily they’re on holiday at the moment.

I love Palm Springs It is very very beautiful. It was just too freaking hot, the last time i was there. I really didnt need a tan so i stayed in the casino most of the time. I envy those who can tolerate the heat and live there though.

I envy those who can tolerate the heat and live there though.

It gets old. Really old. I miss mountains and cold winters.

. I envy those who can tolerate the heat and live there though.

The first time I visited the US I landed in LA and we drove to Palm springs.

To that time I left Germany in a huge thick wool sweater, fur boots and a scarf. It was the first frost in Germany at that time.

21 hrs later as I finally landed in LA people were looking at me, like I’m crazy and I didn’t know why. As I walked out the airport it was around 94F…at 2 freaking am, mind you lol.

Next day it was around 102F. I felt in going to die, wondering how people could enjoy living in a oven, literally.

Nearly 15 years later I’m somewhat used too it. Today we had 106F up here in northern California, and while I’m more “used” to it, I still hate it lol.

Back to the topic, I hope everyone is safe and makes the “best” out of the heat wave, doubt it’s going to cool soon, and unfortunately California deals with fires every summer, guess that’s the prize you pay for wanting to live in a sauna.

up here in northern California

Where in california do you live ?

Up by Sacramento, bit outside of it.