Forever I have used Nic salts from NN and the vape has always been smooth with little or no throat hit. Recently I got a batch of nic from Hiliq the TH from it is huge making it almost unvapeable for me.

I have considered using MTS vape wizard (FA) or Smooth (TPA) but I am not sure either will have any effect on throat hit as I think they will just round off the edges of flavours.

Another option is stevia but again I am unsure if it will lessen it - I currently have one steeping as a test.

Does anyone have any other ideas about how to lower a nic throat hit?

Its funny you mention that cause a dude in youtube comments replied to something I said about MFS nic today of all days. He said he thought it was peppery and harsh but the longer he let it sit the better it got. Ill just post the comment thats easier lol 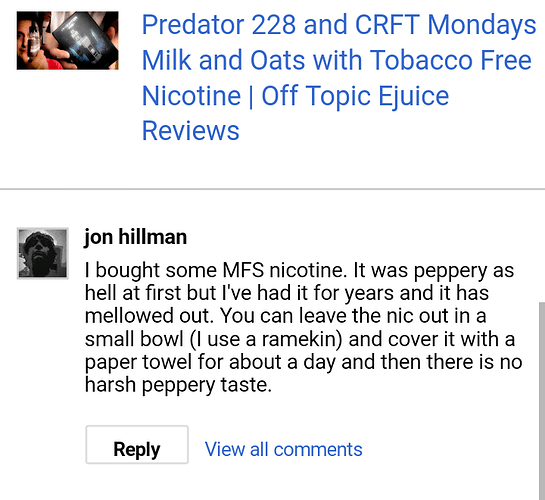 I’ve never heard of this technique but it might be worth searching for…see if it’s common. I have some Armor nic from Nude and its getting harsher by the day. The TH off it is similar to your problem. When I first got it I had no issues…3 months later it’s killing my mixes

Hmm i will leave some out and see what happens - i would have thought that mixing it and leaving it for a month would have sorted it out but it hasn’t changed much - maybe his ‘years old’ has mellowed with time due to it losing some strength?

The TH is really strong in this one and I titrated to check the nic level and it is as the bottle states.

Thanks will try the suggestion

I have considered using MTS vape wizard (FA) or Smooth (TPA) but I am not sure either will have any effect on throat hit as I think they will just round off the edges of flavours.

I have never tried dealing with bad/peppery nic. Use to get nic from wizard labs and as you described, their nic was a lot like that. My solution was to get rid of the bad nic. See to solve one problem, you will create another. Smooth may tone down the throat hit some but it’s very possible the amount you’ll need will mute your flavorings and create yet another problem. When using Smooth you are not supposed to use much because of this. It is usually used with very strong flavors to purposely slightly mute the flavors. Tobaccos, Menthols, Citrus, etc. You can use EM for this purpose though. EM mutes the strong flavors and sweetens at the same time. What this rant boils down to is to my knowledge anything you can add to combat the pepper is gonna effect your recipe adversely except one thing. That is use less nic, but now, you’re wanting more nic. It’s a vicious circle buddy…

Ya i am thinking along the same lines but maybe just maybe someone has an answer - i could tone it down a bit with a 2/3 nic salt smooth and 1/3 hiliq. It isn’t peppery it just has a th that I am not liking some people like it - I am not one.

. It isn’t peppery it just has a th that I am not liking

Are you doing Max VG mixes? If not you can drop the PG for less TH…

Yup I generally do max vg.

Yup I generally do max vg.

In my opinion that leaves only one option and that is less nic. What nic value do you usually use and what kinda of tank?

3 mg and a bunch of different tanks - mason dump tank, aromamizer plus, bfdft, obs engine, plus a large selection of rda. Dropping nic is an option for myself but it is more for customers. I still have nic salts and I still use them - i just have a few litres of hiliq that I don’t like much.

OK, so you subohm. At 3mg it’s not as much room to work but if I were you I think I would experiment. Make you up a couple bottle testers. One with 2.5mg nic and one with 2mg nic. Worst case scenario you want more nic, but, may hit a sweet spot for this nic and get to avoid chucking it. It is possible this nic is stronger than stated. Wouldn’t be the first time…

The TH is really strong in this one and I titrated to check the nic level and it is as the bottle states.

That’s good to know. Guess you had a tester. Still though, try some lighter mixes (nic). Technically that’s how I dropped my nic intake. If you drop small enough amounts you won’t notice it. I do know less nic is gonna drop that TH…

Oh for sure it will - I can control my nic / use different nic and change my mixes to suit - it is not so much for me but the 50 odd people i mix for - I can of course continue to use the nic salts I would just prefer to use up the Hiliq than to tip it.

Ahhhh, well guess what, probably 25 of them are gonna like the throat hits. You got this wired buddy…

I’ve never heard of this technique but it might be worth searching for…see if it’s common. I have some Armor nic from Nude and its getting harsher by the day. The TH off it is similar to your problem. When I first got it I had no issues…3 months later it’s killing my mixes

@SignMan do you store your NIC in the freezer ? I’ve got about 2L of NN NIC some Armor, some regular, and I’ve yet to experience any pepper or harshness from any of it. I’m confused about the above comments on the other brand, where he left it sit out, and it lessened ? I would have assumed, leaving it out, open air, un chilled would have caused it to oxidize much more.

I kept it in the freezer until it was needed but have not stored it there since. I was kinda hoping that since it’s made in that fancy jar it wouldn’t matter lol. I guess it did and thats probably my problem. Luckily I only have a few drops left and have learned my lesson! I have no idea what the guy was talking about leaving the nic out in open air. I agree that nic will be brown in a few hours probably. When I run 18mg nic in my nautilus mini I fill the tank from a bottle thats stored in my vape cabinet…and the juice is a nice, light yellow color. Half-way through my work day the juice is dark brown

I can’t attest to what kills it faster, heat, light, air, not sure, I’m just paranoid about mine, so it only peeks out of the freezer.

Mine is always kept frosty until about half an hour before I use it so that it can loosen up a bit. Another tip would be to split your large bottle into smaller ones once you open it, then just use them up one at a time. Your spares won’t be open to the air this way and will last longer.

Ya I don’t think smooth or other additives will lessen the throat hit! I’m sure you did this but you have to shake the hell out of your nic to get it mix well especially if it’s vg based other there will be hot spots in it. I get my nic vg based 100mg from liquid barn and leave it in fridge after putting some of it in a smaller bottle to use for mixes. When I need more I let it get to room temp shake shake shake and put more in bottle then back in fridge it goes. Hope this helps

Yup thanks - i am well versed in handling nic - I have contacted the company and am waiting for a reply - i am pretty sure it is a bad batch.