11 posts were merged into an existing topic: Design Features you would Like to see in an RTA

I guess it would be good to get this thread back on topic.

I have been both a heavy equipment mechanic and or operator my entire life. I have worked and operated almost every type of machine there is. I also drove all types of big trucks associated with the excavating business.

I spent the last 4 years of my working career at a company doing environmental work. I was both a truck driver and heavy equipment operator doing such things as digging up leaking underground fuel tanks, digging up all sorts of contaminated soil and removing them for proper disposal.

These are just a few 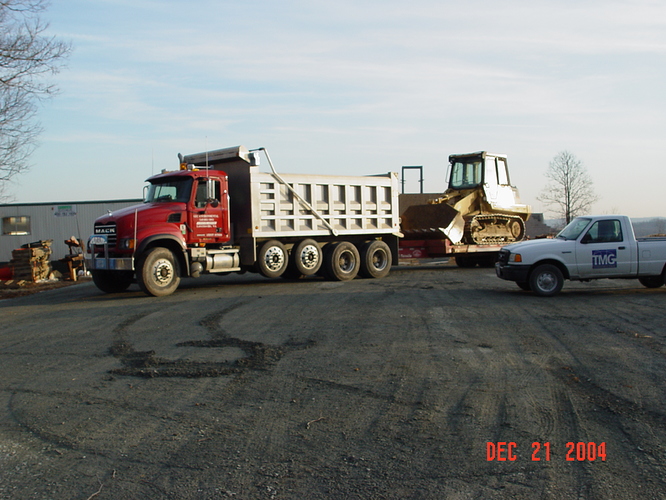 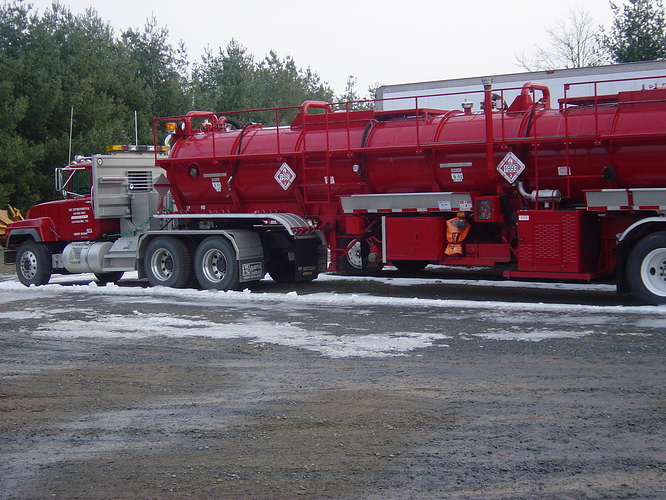 Picture 012.jpg1600×1200 838 KB
This is a vacuum tanker for sucking up contaminated fluids and it has a front section and a rear section so you can have 2 different liquids in one trip 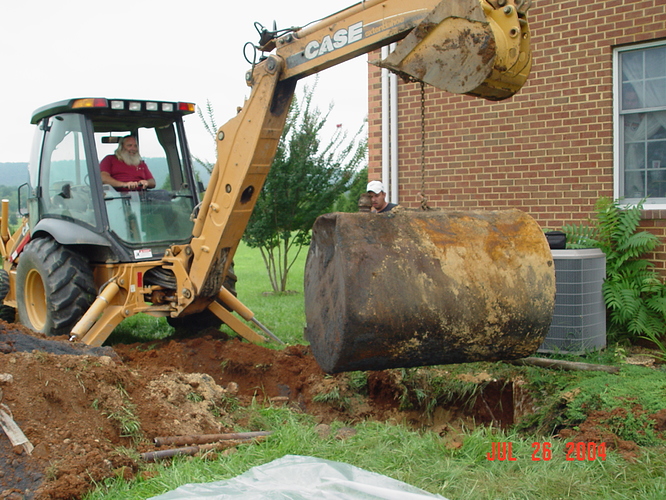 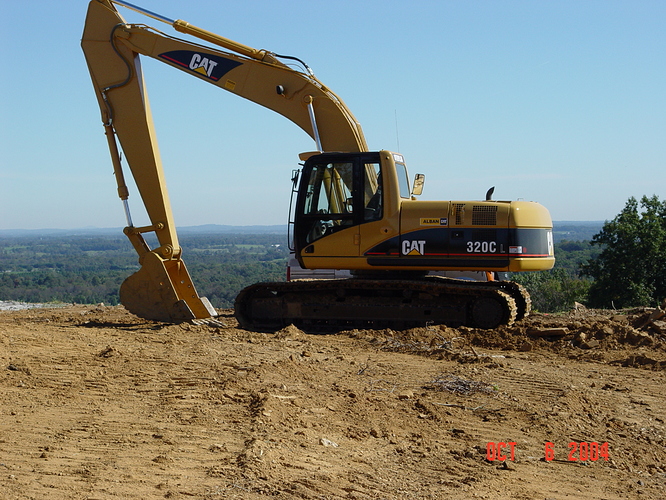 Trackhoe 012.jpg2560×1920 2.03 MB
This machine was the first brand new machine I was ever the first person to operate and also one of my favorite machines of all time to operate.

Hope you all enjoyed.

I always wanted to drive a digger. I had the Tonka ones as a kid. It was a childhood dream to drive one some day.My uncles were both Diesel Mechanics for Peabody Coal Mine here in Indiana. They worked on the drag lines that were the size of cities. And my dad drove a smaller one similar to yours there for the county for awhile before he started his business. I used to go with him on Saturdays to work for awhile. I would fish while he drug gravel out of the pit. It was fun to watch.

Back probably 20 years ago or more I hauled off some contaminated dirt from a gas station in TN - if you know the area it was Raccoon Valley Rd off I 75. It was my first load with a new rig and the first truck in our fleet with a Detroit engine. I was pulling a East 38’ dump trailer. There was no scale but I knew the route between there and Goldsboro, NC where I was taking it and knew how to get around all the scales. the bucket man dropped a huge piece of concrete about the size of a Buick and I new it was going to be a heavy load. So I took it easy, and for good reason. The tires were squatted a bit and when I arrived I couldn’t raise the bed. It was too heavy. No wonder, I scaled in at over 140k lbs! But coming out of a truck with a 400 Cummins to that Detroit it didn’t “feel” that heavy.

I had the Tonka ones as a kid.

No wonder, I scaled in at over 140k lbs! But coming out of a truck with a 400 Cummins to that Detroit it didn’t “feel” that heavy.

The truck pictured above was the same way, in the pic, there is 15 tons of gravel in the bed along with the trailer and 955 cat loader it was surely a little heavy but the cruse control would still get it up a small hill without dropping a gear. This truck was by far the most luxurious truck I ever drove. The owner of the company specked it out with Mack and had it built for him but I drove it more than anyone there including him. I forget what motor it had but it was the largest motor Mack had with a 13 speed tranny as I recall. Driving on interstate 81 in North Western Virginia I could set the cruise at 65 in the top gear and sit back and jam my favorite CD Loved it.

Is this the Specialty Truck & Weird Equipment Channel? 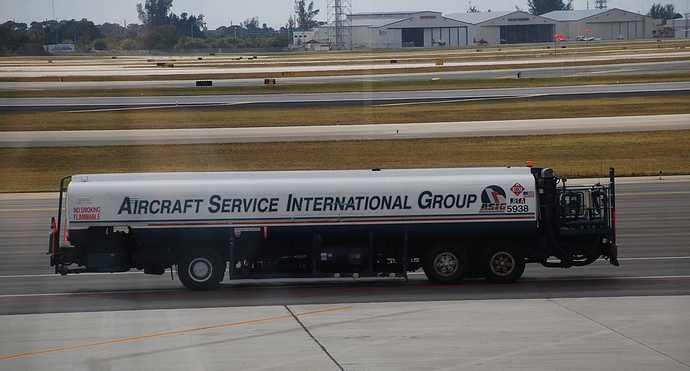 I used one of these for almost 25 years. The northern winters took their toll and I finally moved indoors, managing hot air charters for one of the auto manufacturers. Now managing expedited truck, air charters, & airfreight, for a third party logistics provider.

Hobbies include ham radio, R/C gliders. and love to fish, when I can find the time.

I wish I could say I was musically inclined, but I couldn’t carry a tune in a bucket, as they say. I’m envious of those who can make music.

but have a finger-picking style that’s all my own. I do love playing just don’t do it much.

Not sure how I missed this interesting tidbit. I too play finger style guitar. Travist D picking is the style I play. Think “Dust in the Wind” by Kansas. That is Travit D style picking. I learned to fingerpick 25 years ago. I never learned any songs. I just started making them up. I have one I have developed into a pretty good tune. When I play my acoustic it is to relax. I have since learned Dust in the Wind and a few others and love fingerpicking. When I grab my Gibson SG it’s a different story because it’s used to piss off the neighbors

Yoh, did we play in a band together. I’m still good at pissing off the neighbors, but not just with the house rockin. Anything pisses them off. Just so happens I too play a cherry red Gibson SG. Also own a Bass guitar and a couple of acoustics. I don’t play very much these days but when I can…

Not sure how I missed this interesting tidbit. I too play finger style guitar. Travist D picking is the style I play. Think “Dust in the Wind” by Kansas

Last thing I tried to learn was Rylynn by Andy McKee. I got about half of it down pat, but then DIY took over. Learned up to about 2:10

Talk about sweet, I only wish I had a 60’s model. Now those were build so much better than the 90’s model I have. I unfortunately got poor and had to sell a SG I had back in the 70’s. Even that one was so much better than the later models. You are constantly either paying someone to set up the later models or doing it yourself if you are in the know. I am a little hard on guitars. I’m what you call a string stretcher, big time…

I’m an IT NETWORK MANAGER for a High School.

For fun I play guitar, we also have a school staff band that play at any charity events that are organised where I put down my guitar and pick up the microphone.

I’ve played Basketball in my youth and coached school teams in my later years.

My hobbies these days are competitive darts playing and coil building. 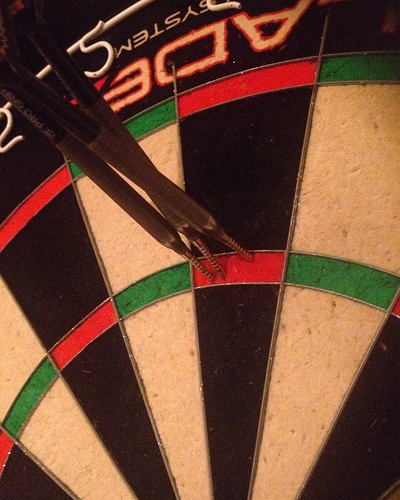 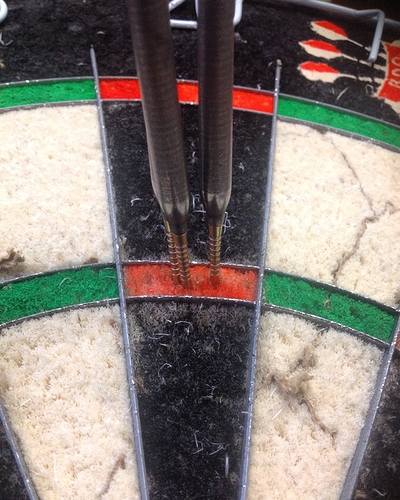 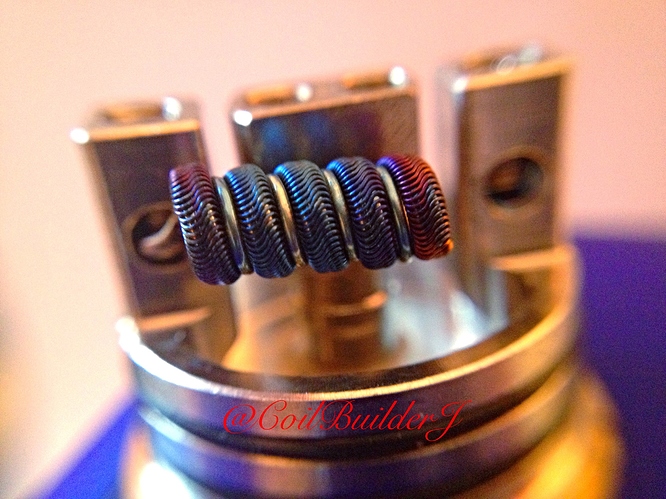 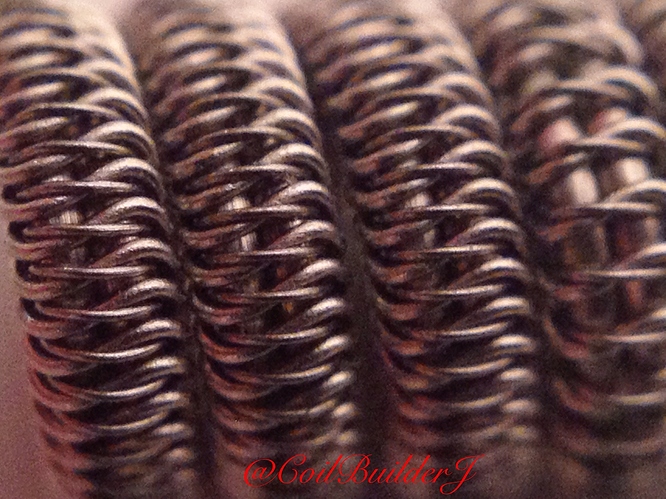 Man, I envy you. I can’t get an Alien Clapton to look anywhere near that good. I tried it 3 or 4 times. And for about 1/4" I had it going great. I blinked and it all went to shit. That braided ones is sweet. How would you compare the vape over a Clapton? Because I have never tried braiding. Very nice work!

Lucky Dog, Some times the deals come our way if we keep our eyes open…

Its not a braided alien.

Before you stretch out your Clapton you feed a piece of 38 or 40 or 42 etc down through the Clapton and then stretch only the Clapton out so it stretches over the length of the stitch. Then as you wrap the alien it looks as above.

Any kind of coil build is a matter of laying down wire and practicing.

The hardest thing to get right every time with aliens is how much to stretch the Clapton out.

After you’ve stretched it out the rest is pretty straight forward as I use swivels to attach my core wires and as long as you use a slight lead forward away from the drill chuck it pretty much wraps itself.

As for the vape, TBH I prefer a 2x26gNm80 core with 44gNm80 fused Clapton better than some of the fancier aliens.

The stitched alien spits like holy hell, the colourful alien above dries the cotton too quickly but it was a 0.09ohm single coil build lol.

I’m currently vaping 2x26/35g Nichrome 80 dual coil aliens that are really nice but again not any better than a 26/26/44 fused Clapton.

The only real difference I’ve found with aliens is that they tend to wick a lot better than a standard fused Clapton.

I put a dual coil 30/34 staggered fused Clapton in the billowv2 a few months back. 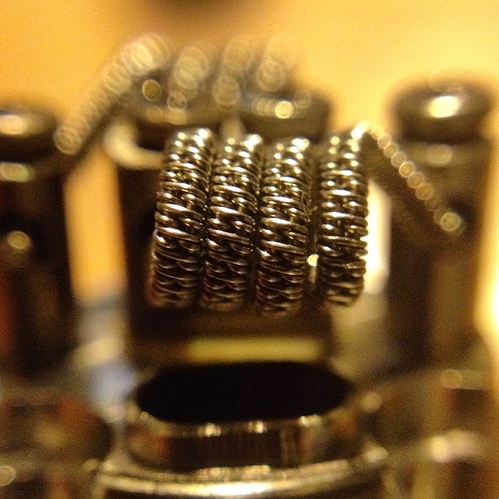