hi, could I leave out the PG from my recipe and add the nic later? So by adding the nic I don’t dilute from the set recipe? Thanks

Hi, Curious what your mixing blend is ? You can mix max Vg meaning adding no further Pg other than what the flavors contain and yes you can build a recipe so that it is Nicotine free the calculator does this for you. As for adding nicotine on a recipe that calls for it , you can add it at the time of making the batch or once it’s steeped w/o problem. I do it all the time as to conserve nicotine. Hope this helps.

hi, thanks a lot for your answer. I’m doing 7030 vgpg. Prob is that’s the ratio from mixing to steeping end, after a few weeks I want to add about 10pc nic in pg and that would leave it weakened and also the final ratio would be out. Thanks.

Are you using the ELR calculator ? You have me a little confused. 70 vg / 30 pg and then you will also have Pg based nicotine which is not really imperative in adding into the mix from the get go, but as far as the 70/30 part you’ll want to include it altogether so that the flavoring will have time to steep into the base. The nicotine ( being in pg ) will be figured into the 70/30 part being that your nicotine base is in pg but it is ok to leave out the nicotine until it’s steeped. Are we still on the same page ? I am just trying to make sure you get what I’m trying to tell ya I don’t want you to leave out the pg that doesn’t contain the nicotine.

Hi, yeah I’m using the calculator, if I mix it normally it all goes ok. I thought it would be simple enough if I wanted to go a different way and mix up a batch that can be used as 0mg and alternatively add nic later. Say you make a 100ml up for you and your 3 friends. You make the 3 x 100 ml as per a recipe at 0mg. Then you talk to Bob and Debbie and they say they love 0mg so you give them that. But Mark is an ass and wants 6 mg for his 100ml. You’d think you could even pour 10pc into another bottle to make room for the nic which is about 8 percent by weight at 72mg strength nic. But now two things happen, first your flavours are diluted and second your PG ratio goes up to about 6535 because of the nic. It would be much easier if you had very high strength nic and the difference wouldn’t be much.
I was thinking if you wanted to have this setup you would do a recipe as per normal at 0mg, then leave out some of the VG and the PG (fingers crossed it’s not a super strong mix with tons of flavour concentrate in PG), then if someone wants 0mg you just add raw VG PG to top up, shake it. If someone wants nic you add that with a little VG too, shake it. It would take some time for the nic and the vg pg to blend in but basically you would have a steeped liquid all set to go with nic.
Sorry if I didn’t make that twist clear.
I think there are calcs to do this, some shops seem to store mixes like this and then offer a calc to figure out how to add the nic ‘to taste’.

If I were you I would enter it into the calculator with the highest amount of nic you will use for whoever…like take Mark for instance…I would enter it into the calculator for 6 mg of nic then when I make the recipe I would just not add the nic but I would still have the correct amount of room to add whatever I need and still keep it at 70/30 ratio…then if Debbie and Bob want 0 nic, I would just replace what the amount of the nic is supposed to be with PG instead so when Mark comes by and wants his 6 mg you can just add the correct amount of nic that is in PG…I hope that makes sense…essentially you will leave enough room for whichever you need to add…either 6 mg of nic or replace that with PG only…like the following recipe…I would make it as is but leave out the nic and when Mark wants it I would add the 6.22 grams of nic to the 100 ml or if he wants 50 ml of it I would add only 3.11 grams of nic…then when Debbie and Bob come by I would add 6.22 grams of PG to the 100 ml or if they want 50 ml only add 3.11 grams of PG to their 50 ml…I mean, you might have to do some simple math, but your flavors would not be diluted because you have left room for whatever you add and you will keep the 70/30 ratio…you could always go back to the recipe in the calculator and put the amount of ml they want and it will figure out the math for you to add the correct amount of nic or PG… 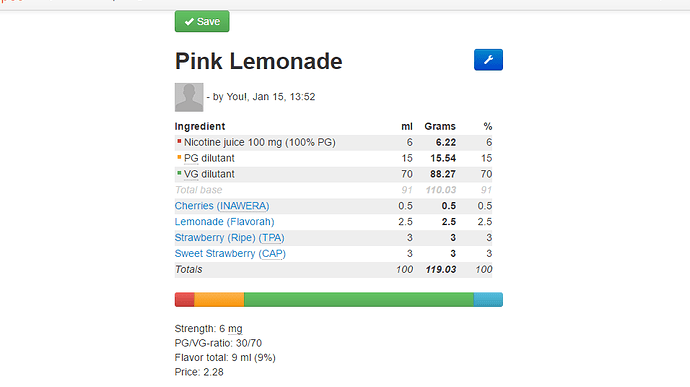 Don’t feel dumb, the only dumb question is the one not asked! We are always here to help! I’m just glad it makes sense to you because I wasn’t sure that I was writing it correctly!

Thank you @Amy2 …I try to help when I can, sometimes I refrain from saying anything because I am not sure it is the correct way to do things so I let the pros handle it!

I do just that … I call it my PSJ (Pre Steeped Juice) I mix it for 9mg (I have one bloke that likes it)
and I print this little label to go on my PSJ Bottle: I do 500ml at a time of my most popular juices and keep them in dark glass swing top bottles
As you can see I have left out the nic, but left a 9mg vg nic sized “hole” in the mix, I do either 30 or 100ml bottles
so the table will let me know how much vg based nic, and / or VG to put in the bottle
along with the PSJ quantity which is blurry but can be seen in the black bar

nice idea thanks. I like the idea of vg nic now, I keep running out of room in my 7030 high concentrate % recipes and have to go to eg 6535 and can feel it in my throat!

Thanks a lot for your help Amy. Can I be a Flavor Prince?