Some old chick at the post office wants to vape

Says she’s desperate to stop smoking but has absolutely no idea and knows nothing at all about where to even start.

This was while I dropped-in at lunch to grab my delivery and started telling her about the October cut-off on importation of nicotine, so I’ve told her there’s plenty of devices that come with pre-filled pods you just plug-in and charge with a USB cord plus pen-style vaporizers you can refill yourself with liquids of your choice that also charge internal batteries via USB.

Further, I told her "Just make sure whatever liquid you end-up with is salt nicotine based - 36mg - 50mg: now there’s two types of nicotine, if you get standard freebase it’ll either be too harsh to vape or too weak to keep you away from smoking - so get salt nicotine. They’ve even got nicotine powder now starting to catch peoples attention which I assume is just salt nic dried out but iunno"

I wrote down the URL for https://vapo.com.nz plus https://vapoureyez.com.nz and told her those two sites are fine and reputable, explained the way Australian/New Zealand vape sites have dual site’s so each country can order from the other to get around the law not allowing us to actually purchase nicotine in our own country finally proclaiming that our government and Greg Hunt specifically are all idiots.

Now I’m out of there though, I’m thinking I might have a look at the two sites and pick a few decent contenders for the absolute no-nothing-new vaper, plus a short-list of liquids - maybe one from each category of flavour to narrow-down the headfuck of the woman trying to pick a juice, only to find it disgusting or unvapable.

Flavours will be more difficult to shortlist than devices, since there’s only so many options between those two sites.

Subsequent to all that, I finally have 50mg salts in my tank again… didn’t even bother with flavouring: just squirted a 50:50 mix of base and VG, filled the tank and started sucking.

Now to go vertical-coil-up the new mutant RDA with TC wire and simultaneously test TC and the tank… it was heavily discounted, as was the little Vaporesso VM18 I got for MTL 50mg salting, though that VM isn’t nearly as well machined as the Mutant it was only $9, so a 5 pack of coils for the Endura T18 would’ve cost me more than a new tank… 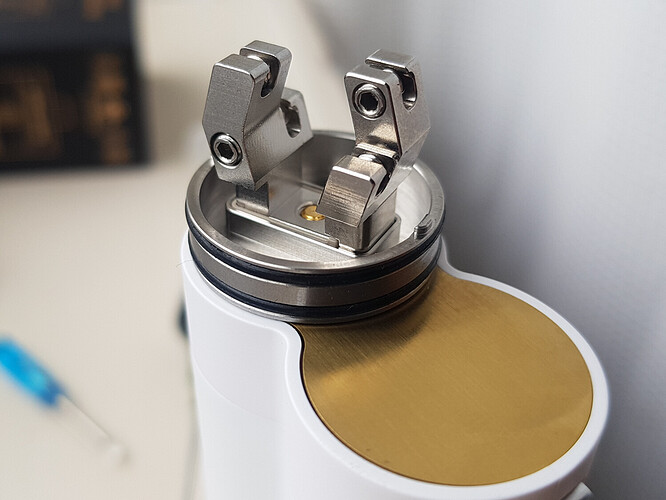 There’s only one or two devices I’ll really want enough to pay full price for between now and October, and though I don’t need any new hardware, I am not immune to 50, 60 or 80% off sales

Definitely recommend the Uwell Yearn. It’s my daily driver at work (replacing the Caliburn). You can get both pre-filled pods or refillable. They have a have a 4 pack of prefilled with a tabacco, mango, apple and mint. A good way to for a new vaper to try different flavor profiles. I think they are available at both VE and Vapo

I would’ve gone with a Caliburn just because of all the talk it’s gotten and because I’ve never used a pod device, but if you say the Yearn trumps the Caliburn, Yearn it is! 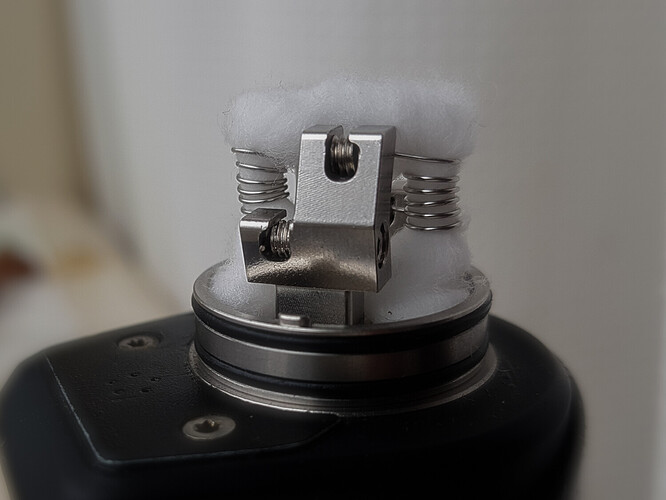 Trying to talk an ex into vaping too: she’s one of the countless who tried some disposable once and the flavour of whatever liquid was in it was SO awful it put her off vaping on the spot.

She’s also in Adelaide, thus half a country away so I can’t just take mine over and let her take 'em for a spin.

I’ll tell her the Yearn too if she shifts.

What a good temperature to start at for 26ga SS? 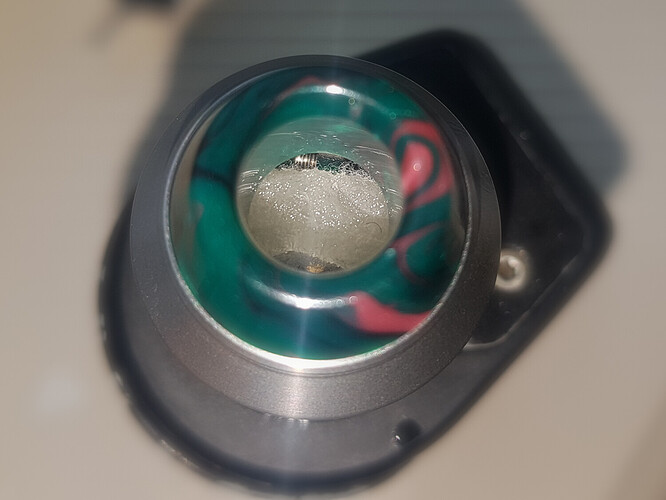 And this mod I also threw in the order, I got three of these in spite of the fact they have no features and are fucking butt-ugly: $7 from Vapoureyes.

The plain-jane of the mod world… 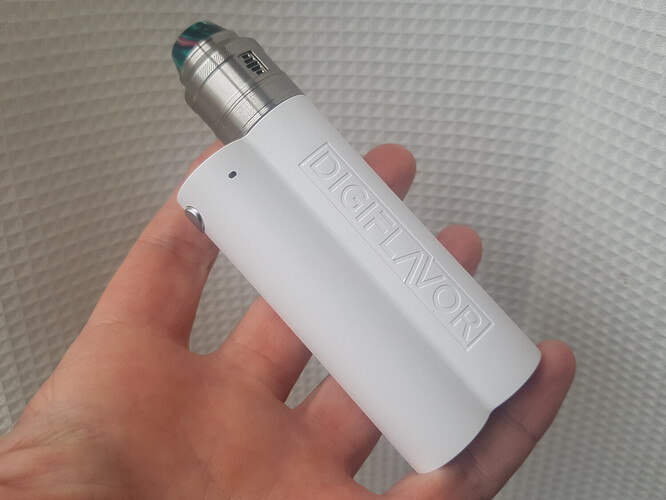 There’s no screen, no wattage control and though it’s a dual 18650 device the batteries don’t even work in series but parallel, which means twice the battery life instead of twice the power like most other dual mods.

The only three functions it has are cycled by triple-tapping the only button on the device and switches from 3.5V → 3.2V → Bypass modes: that’s it, all the features it has.

Like a mechanical that still has a basic safety chipset in it, I bought these purely as backups in the event the good mods I have all suddenly shit themselves in succession and I’m stuck with atomizers ans nothing to power them.

Works fine in bypass and though they probably can’t do more than 40W, that’s about the upper end of power needed for most of the tanks I’ve got and I’ve got no plans to add any new battery-eating tanks to my inventory - ever really.

Trying to go smaller generally, I am and though I still like my RDAs they can obviously be coiled to operate on whatever power requirement I want and I want ~40W for sub-ohm and as low as feasible for MTL.

Since I grew-out of the novelty of blowing honking great obnoxious clouds in public two- years ago, I’d rather a smaller, more discreet device in public so MTL salts are perfect for that while the sub-ohm shit can stay at home, which reminds me I’ve gotta detach that fn smoke detector from the ceiling…

And sure the nic-sickies are starting to creep up some, but that’s the price you gotta pay.

The Yearn - great mtl draw, auto draw flawless, never leaks, superb flavor. I would start your temp at 420f and work up from there

Refillable I assume, since this is a mixing forum and I can’t see a longtime mixer being happy with sealed pods with only 4 flavours when you DIY?

Gotta say too: though plain, unflavored liquid tastes a bit well, bad, VENZs salt nicotine is quite alright: at 50mg/mL it has the same lung hit the commercial 50mg juices I ordered few weeks ago, have.

My main concern before trying was it would either be freebase-harsh or SO “smooth” there was no punchy lung boof or feeling at all, but it’s bang-on the way the commercial salts fell on the inhale.

And here’s my final show & tell pic for the day: my first ever Nichrome coil… 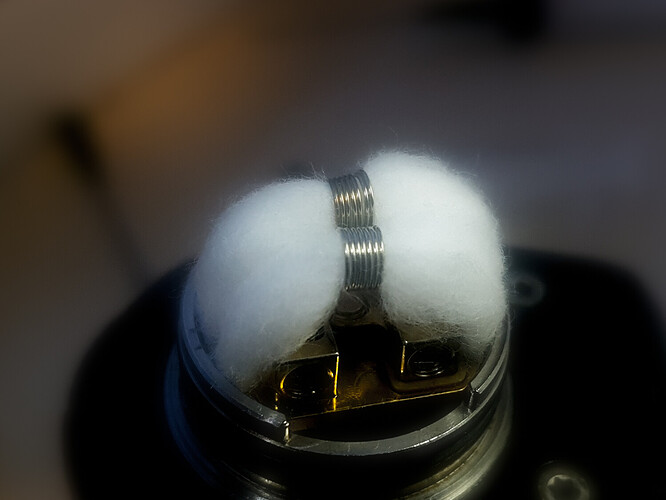 First time ever using ni80, and my god it’s so much easier to wind than Kanthal: I just use a screwdriver shaft to make all my coils and don’t have any jigs or coilmaster guides or, whatever.

Yet both coils wound beautifully tight - first time, no pressing or arseing about with the wire before or after: just perfectly close loops one on another all seven wraps for both coils…

Good thing I get along so well with it given there’s a full 250ft spool of it, too

Edit: almost perfect - there’s that one obvious little fraction of a millimeter gap clearly evident on the back coil, but that’s the only gap

If you had to pick ONE commercial juice for each major flavour group that’s available at most sites, which would you choose for fruit, dessert and tobacco?

Vape Tool is recommending 34.5 watts at 3mm ID. Duo coil. Depends on how hot you want to go. 40 watts for a hotter vape.

After upping and downing the power I’ve settled on running at 33.3 watts (because the .3 was just too tempting) oddly just using intuition as a guide.

Close to the calculated recommendation!

I briefly tried TC mode but it just tasted flat to me, so switched back to power mode again and I’m surprised to find, compared to kanthal the stainless steel are much cleaner after a 24 hour period: by now, the Kanthal would already be showing signs of dark brown staining on the cotton around the coil, while the SS is only a slight pinkish tint and the wire itself still shines.

Since I grew-out of the novelty of blowing honking great obnoxious clouds in public two- years ago, I’d rather a smaller, more discreet device in public so MTL salts are perfect for that while the sub-ohm shit can stay at home, which reminds me I’ve gotta detach that fn smoke detector from the ceiling…

And sure the nic-sickies are starting to creep up some, but that’s the price you gotta pay.

Dude, you are a trip! you crackme up man. At first, I thought you might be a young person, early twenties. Then I thought maybe not maybe he is young at heart, maybe both. Anyway…

Very entertaining and a good laugh.

I have been using the Caliburn G and enjoying it but I like what @KiwiPete had to say about the Yearn and especially that it has prefilled pods, which IMO is better for a beginner so that “stuff” don’t happen

to narrow-down the headfuck of the woman trying to pick a juice, only to find it disgusting or unvapable.

where can i find this state side?

From the states? I dunno.

I ordered mine from https://vapoureyes.com.nz(or .au) where they’re on sale for like 70% off or something.

I’ve been using it - it’s been 100% reliable so far and the dual 18650s last 2-3 days easily, though I’ve also been alternating between the Aegis with a little MTL w/50mg salts and the aforementioned new mod with the RDA, so I haven’t been using the new mod exclusively.

Alright I’ve stopped in the post office on the way through earlier and given the old chick a bit of paper with “Yearn +50mg mixed pods) or Caliburn/G with mixed 50mg pods”.

The chick herself wasn’t there so I left it with some other chick iunno I don’t fuckin know these people it’s not like I can call em by name.

Hopefully that’ll stop her buying a pod with 100mLs of 3mg juice that doesn’t do squat …to stop her smoking.

At first, I thought you might be a young person, early twenties. Then I thought maybe not maybe he is young at heart, maybe both. Anyway…

I’m 45, but not above being an immature dickhead

Also packin’ a 136 IQ which makes me frequently overstimulated so have way more mental energy than I probably should, plus I’m easily bored by socially acceptable behavior leading me to take the piss and stir shit for my own amusement.

I’m 45, but not above being an immature dickhead

Also packin’ a 136 IQ which makes me frequently overstimulated

How does having a high IQ (I assume it’s high) overstimulate you? I find that statement interesting.

More assumptions on my part coming up; What is an average IQ and what’s considered brilliant?

How does having a high IQ (I assume it’s high) overstimulate you? I find that statement interesting.

Like mental octopus tentacles always feeling around the edges of everything for any gap or crack or hole they can find.