Im working on a sour watermelon recipe right now its flavor west watermelon at 4% and flavorart sour wizard at 1.5%. I just made it and tested it out and i really cant taste the sour wizard and the watermelon is super light on the exhale. Any suggestions on what percents i should try next without over doing it.

Hello and welcome to the forum @ ELR!
I don’t have any advice specific to those flavors, I’m sure someone else can jump in for that. But, I can tell you that if you tried it right after mixing, you will want to let the mix steep for (at least) a few days before it starts talking to you. If you want it to be ready right off the mix, you probably need to try higher percentages.
You can read all of the notes for the watermelon you have here (if you haven’t already).

This is not going to curl your toes but the wife really likes it. Looks like I go .5% higher on the watermelon and the sour compared to yours (though yes they are different vendor concentrates I know) with a few complimentary flavors on top. To me it’s a lot like happy cowboys candy (paraphrased of course).

If you’re going for pucker factor, let me know what %% you get to for achieving that. I’m curious myself but haven’t tried to push it. 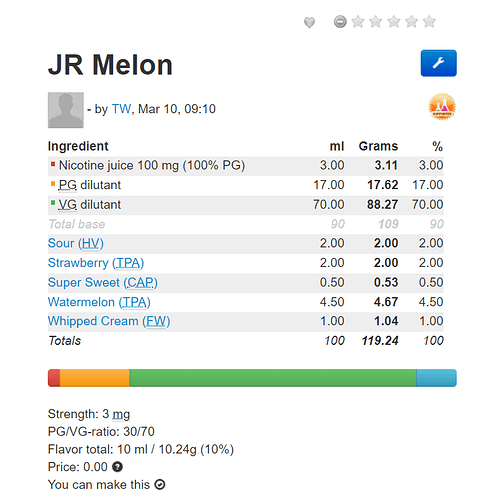 Flavor west (FW) is the brand you go to if you want candy flavorings, I do agree with that, but that’s also the issue here. Most FW fruits are extremely artificial, overly sweet due to the fructose (not all but most) and will give you results that aim more for gummy bears or gummies in general, when sticking to the category you’re aiming for. You will have to find a watermelon or melon that has the opposite note (bitter/sour/tangy/unripe/ripe etc) if you want to bend the FW. Its very hard without throwing the whole bottle (don’t do it) of sour in there, and even then its probably not sour enough for you. All of that need steep tho, you won’t get the results after a simple shake and vape.

Try FW watermelon candy instead with sweet & tart and 1-3 drops of sour after a 3-5 day steep, wait another 3 days and then adjust the percentage if necessary or layer to get better results as explained above.

I find you can achieve a sour effect using sour Apple (EF- euro flavor around 2-2.5percent) or Flv sour Apple around 0.25-0.5percent. Any higher and you will have trouble not tasting Apple in the mix but at these percents you can add a sour effect without overpowering what you want to taste as a primary flavor…

Edit: if its watermelon your after my vote is for purilium from Nicriver have used up to 7percent with no off notes…

Well yeah but that’s what I meant earlier, without layering a other brand that does the opposite to fw’s overly sweet candy fruits, he/she will have a very hard time bending this into the sour he/she is aiming for. Reason I suggested watermelon candy was me assuming he/she got mostly FW flavors on hand, since an early topic were created for sour apple using FW green apple I believe.