Has anyone done full (inside core and outside wraps) ss fused claptons yet and if so what’s your opinion? I’ve heard of people doing ss cores and kanthal wraps but haven’t really heard of doing 100% ss fused yet. I plan on using in power mode.

All I can say is advanced vape supply. Check them out. They now use small gauge wire to get alittle bit higher ohm rating.

@Bandmn check out this video

Do any of you have any input to if they are better than the typical nichrome/kanthal fused claptons?

Sorry buddy, I’ve never used fused claptons but I might try them out sooner rather than later

I can’t speak on nichrome since I don’t use TC mode but I’ve made claptons with only SS 316 and love them. Compared to kanthal they give a cleaner flavor IMO. The SS also heats up quicker than kanthal.

SS all the way now, I never touch my kenthal stuff any more, The flavour from SS and versatility makes it a no brainer for me

i will be ordering 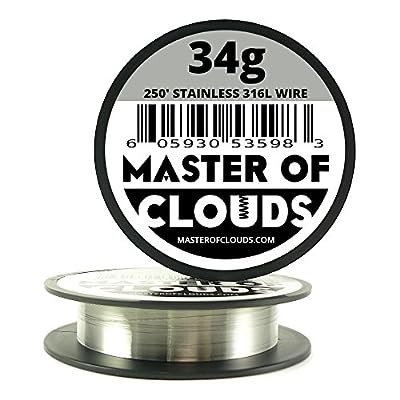 Also, just a heads up. The resistance with SS is lower than kanthal so I stick with kanthal on mechs like the noisy cricket to stay in the safe zones.

yea i have noticed that, right now im using an ipv3 li with a griffin 25. i have 9 wrap 24g ss duals in the griffin at its reading .21 ohms. im also gonna order some 26ga ss to help with coil size to be able to keep the resistance up.

I stick with kanthal on mechs

FYI for those buying stainless steel resistance wire
All SS is not created equal.
It costs a little more, but I suggest buying SS from Kidney Puncher…
It is Genuine Sandvik Wire - Smelted in Sweden, Milled in the USA. (Not China Wire)

i get my wires from the Crazy Wire / Mesh Company (UK) - i get better price and quick shipping.

i made fused SS clapton, once with 28 core and once with 26 core … and 34 wrapping. resistance will be very close to a 2-strand twisted of the inner core.

i love the taste of SS - it is different than other wires in my own experience (YMMV). however, i didn’t stay long with the fused clapton as i didn’t see a lot of taste gain compared to the single core. since i’m not into big clouds i reverted back to regular SS clapton (in and out) - i would rarely use a 26/34 - only for large® tanks it’s always 28/34 or 28/35 for me. the fused clapton will drink your juice and battery faster too - which means you need to carry extras if you go out with that set up.
good luck!

Can anyone tell me the different between the ss316 and ss316L ?

here is a little info hope this helps

i used Lightening Vape SS and it was great. i also have their NI80 - which i use rarely now after moving fully to SS - i recently got the TMC SS430 27 gauge (from here) as i needed an alternative to the 26 (which for me is thicker than i need) and it’s playing well as a clapton core with SS 316L 34 wrapping

i don’t know much about the other vendors. the tip i can share with you is, after you make the clapton, heat the wire with your torch or lighter before you wrap a coil. it makes such a big difference and takes away the springiness in the SS. this is much easier than trying to shape the coil after wrapping it. the other option is, wrap the coil, install in your build deck, fire it up, then take it out and shape it again to the ID you need, then install. this technique gives me the chance to shape the coil to exactly what i need with SS

Thank you both for making me viser