OK, so I think I’m ready to delv into temp control. I am leaning towards stainless steel, but not sure what mod’s will do SS successfully. Any and all recommendations are welcome.

At this time not all TC mods supports SS wire. Joytech TC mod are fast becoming one of the better mods that support SS wire. With their latest update they support 316L, 317L and of course 304 which it always supported. The Wismec Rx200 also uses a Joytech chip and enjoys the same features as the Joytech TC mods. A few on ELR own DNA200 devices. As far as I know they too supports SS wire but you’ll have to get more feedback from those who use one. Also just released is the IPV5 which now includes SS wire support. Now I have only used the IPV4s and will say I love it every bit as much as my Wismec Rx200. I assuming that the IPV5 will be quite nice as well. Also be aware the Kanger Kbox 70 and 200 now support all wires in TC mode though like the IPV5 more feedback is needed as for quality or lack of bugs.

If I had to recommend a TC Mod at this time I would say the Evic VTC Mini for a small device or the Wismec RX200 (or the Wisnec DNA200 device) for a 200 watt device. Once proven I would highly consider the IPV5 as well…

I use 316L ss, i have the rx200 and vapour shark DNA200. it’s working but not flawlessly. the x200 will sometimes tell you it shorted, and the dna200 will slowly loose the power, then you will have to take your atty off and put it on again press yes to new atty. then it will work and after 10min you have to do it over again. it’s a little pain in the ass but get the best results with the dna200. It actually tastes different even with same settings on dna200 and rx200, i don’t think the rx200 is as precise in output as the dna200

I use 316L . With SS you can use power mode if you like. Can also dry fire to clean coils. The evic vtc mini and the rx200 work well with tc. Make sure you do the update if you get them.

I have had all of my DNA devices and my SX Mini’s lose power on both SS and Ti.I used to think it was a loose connection on my atomizer but now I am more thinking more it is just the nature of these low resistance wires.I have found a solution to cut down on the number of times it happens to me.When you feel it has lost power , unscrew the atomizer as you were doing and hit the power and make sure it states check atomizer on the screen.Screw the atomizer back on and hit the fire button.When it asks if it is a new coil , hit the + for yes.Then hit your fire button five times and lock it.Then hold the + and the fire button.This locks the ohms as you probably already know , but it is working for me.Hopefully this will help you as well , please let us know either way.The only downside is now when I change atomizers the mod will not ask if it is a new coil because the ohms are locked.
I don’t know if the RX has a way to lock the ohms but if it does might could try it?

I am using 316L SS and titanium builds on both the rx200 and vtc mini in cold/hot weather extremes for the past 2 days and I am just going to say I am having no problems at all with the SS builds but my Ti builds are driving me crazy going from the cold outside and back inside to the warm. Just my 2 cents the VTC mini or the RX200 and SS wire is working the best in these conditions.

Cuboid works a treat with ss aswell. Just thought I’d put it out there.

Thanks all, looks like a good consensus on a few. I will do a little research on the suggested mod’s and take the plunge.

I’m taking my first dip into the SS pond. I’ve been using the vtc mini for the last month, with Kanthal at 10 - 11 watts and it’s been working great, no complaints. I’m a low power tobacco lover, so I don’t venture into high power territory.

That said, I just received my order of 28ga 317L from Unkamen. What great service on the shipping. They also tossed in a sample of 26ga Grade 1 Ti. A nice surprise. It’s my first time doing business with them, and I’ll definitely be going back. The Ti test will wait for now, though. I just did my first SS build on a Joytech CLR coil, and I’m very pleased. Nice clean flavor. It’s a noticeable difference from the Kanthal.

I’m still just using power mode on the mini. The build came out to .76 ohms, and I even bumped the power up to 12 whole watts. Woah, fasten your seatbelts!

I have questions about TC. Might as well give it a whirl if there’s a benefit, for a low power user, like myself. Maybe that should be my first question. Is TC even going to make a difference in performance or satisfaction at my low power?

Next question would be, knowing my lower power preferences, what temp would make the most sense to shoot for? Is it strictly a matter of personal taste?

I figured I’d ask here first, before I just start trying random TC settings for 317L. I’m a happy camper with my various tobaccy flavors, in power mode, with the SS build. Can I expect even better results in TC?

Can I expect even better results in TC?

I’m a low power vaper as well. I rarely get above 30 watts.

This, in part, because I use no wire lower than 26ga. most of the time and I do very simple coils. The TC portion of vaping, for me, is just a guard against dry hits. Once you figure out the temperature setting that goes along with your wattage setting, life is good!

Maybe it’s a tobacco thing. I don’t hear of many tobacco fans doing the high power. I know I couldn’t handle it…lol.

I only use simple coils also. I’m very glad I was able to fit 6 turns of the 317L in the CLR coil, without worrying about shorts. There’s not a lot of real estate to work with. I ended up at .76 ohms, and that’s working fine for me. I usually play closer to 1 ohm, but not going to sweat it. I have a 2 flavor Hangsen, with a Gold Ducat enhancer going in it now, and it’s delicious. The tank mixer strikes again!

When I try TC, I guess I’ll just pick a temp, and move up or down as the taste dictates. I’ll let the taste buds guide me. It can’t be any worse than my 10% Arabic test mix! 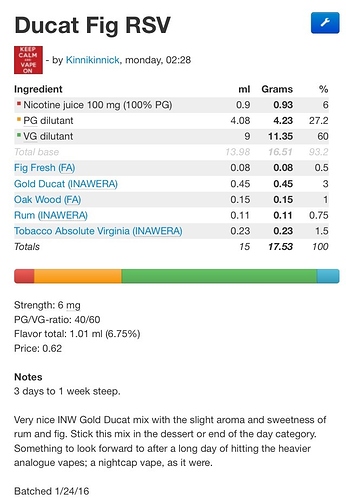 Took me a while to get the knack of the TC thing with tobaccos, but you’ll fall into it quick enough, I’m sure!

Start low temperature and work your way up to what you like. For me tc is like…using a car analogy. Watts= how hard you push the gas pedal to start moving…temp setting= letting up on the gas pedal when reach desired speed. I hope that makes sense. Sometimes I don’t do so well explaining. For me ss has better flavor then kanthal. Has anyone made Clapton coils with ss? Been thinking about it. Only have 26 awg ss

Yes, makes perfect sense, @Chuck6, thanks. I’ll do some experimenting and see where to set my cruise control.

I agree 100% about the better taste. That alone, made the switch to SS a nice improvement.

I use TCR 108 for my 317L Triton coils. For me TC seems to be a more consistent smoother flowing vape.