Thanks to http://shop.steamcrave.com for sending me the Steam Crave Glaz RTA for an unbiased review. 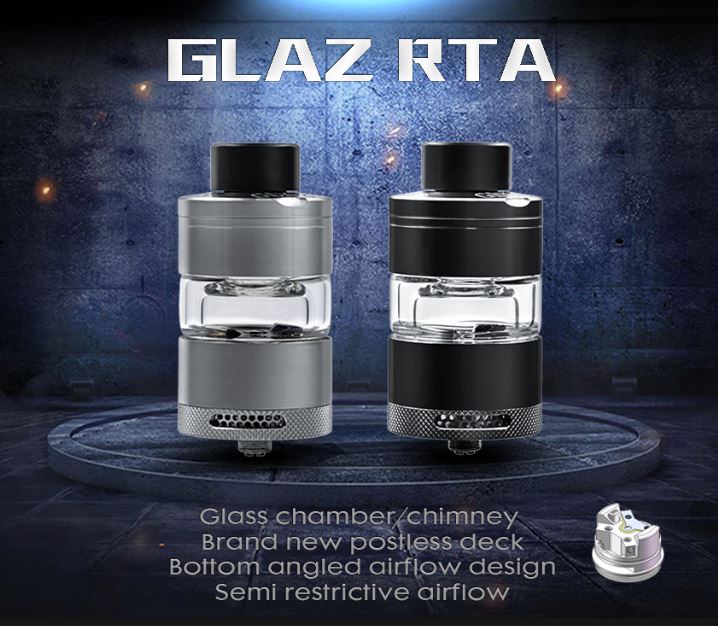 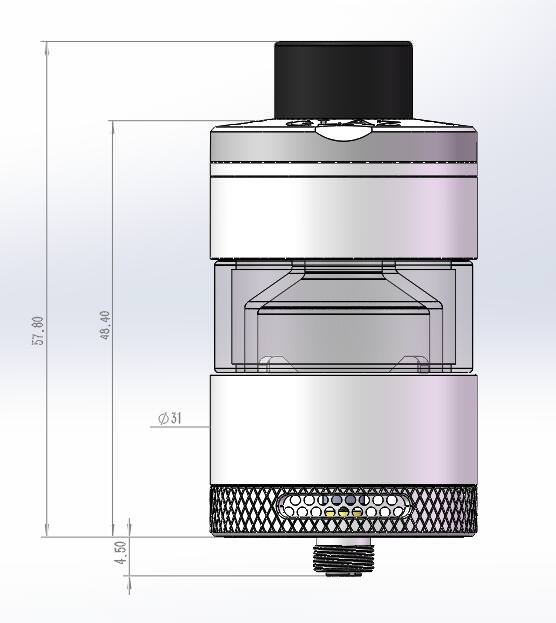 In the box you will find:

Getting to know the Steam Crave Glaz 31mm RTA

I am guessing since your reading this review you have heard of Steam Crave before, one of the best tank mfg’s in the vape game. Not a big name in my local vape shops but when I walk in with one of their tanks or RDA’s they get attention. What I really appreciate about Steam Crave is they are not the type to release a new product every month. They take their time to put out quality products and if you have owned there products in the past I am sure you will agree.

There new line is the Glaz series and comes in both a RTA which is up for review here and the RDSA (really just an RDA) that I reviewed earlier this week. 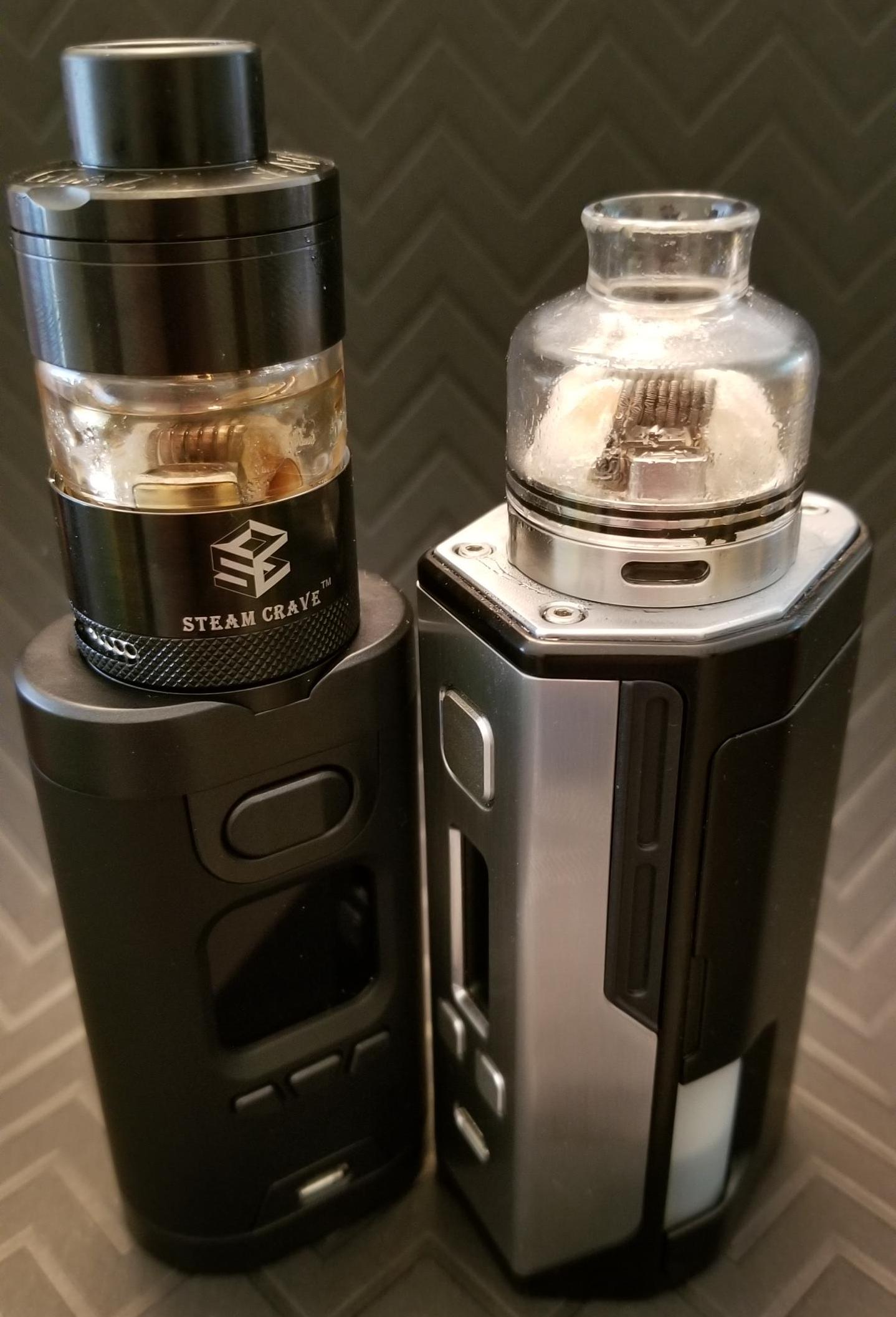 The Glaz series is a bit of a departure from there normal airflow, instead of side it is now an angled bottom airflow. 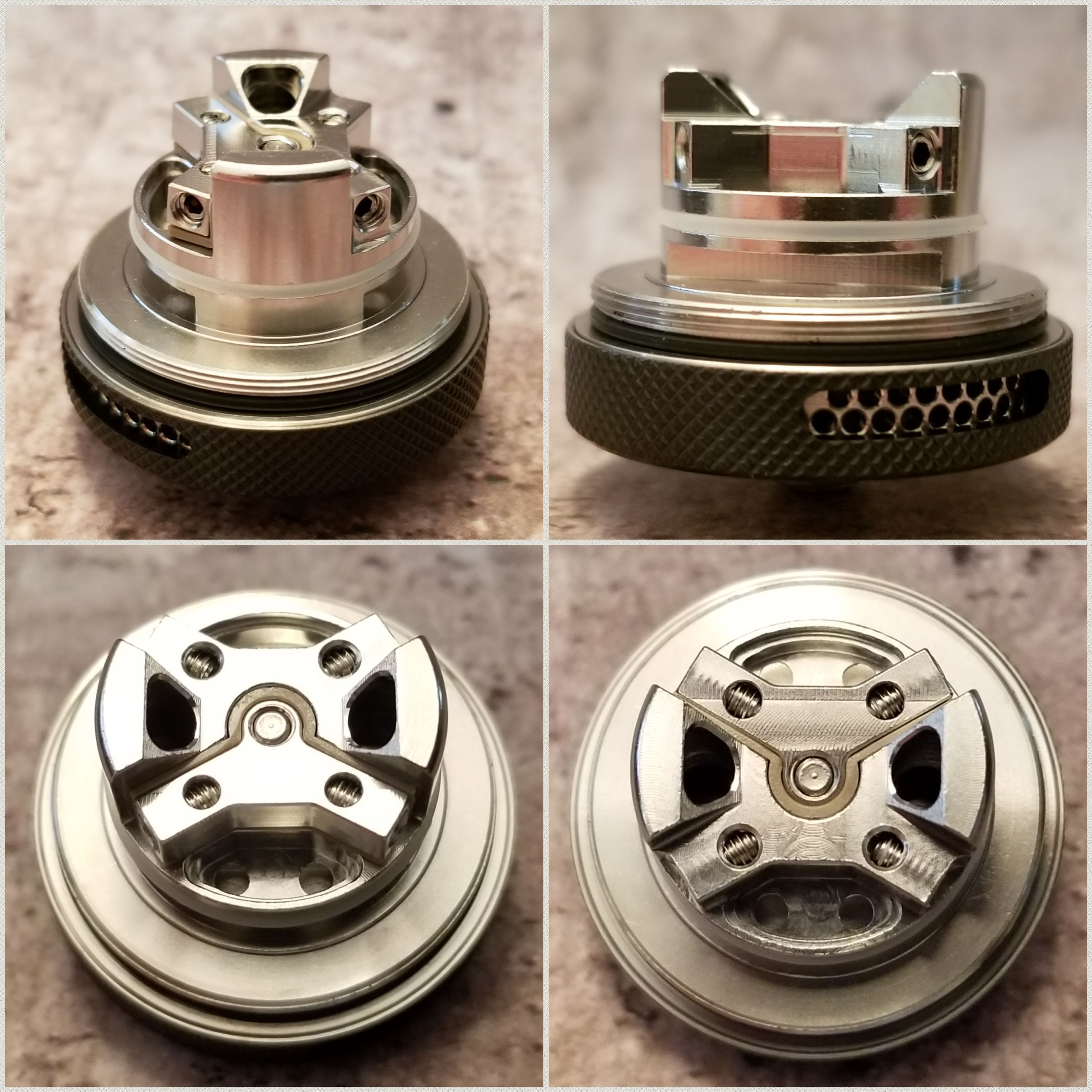 The Glass RTA also features what I believe to be a first for them, a slide top refill. 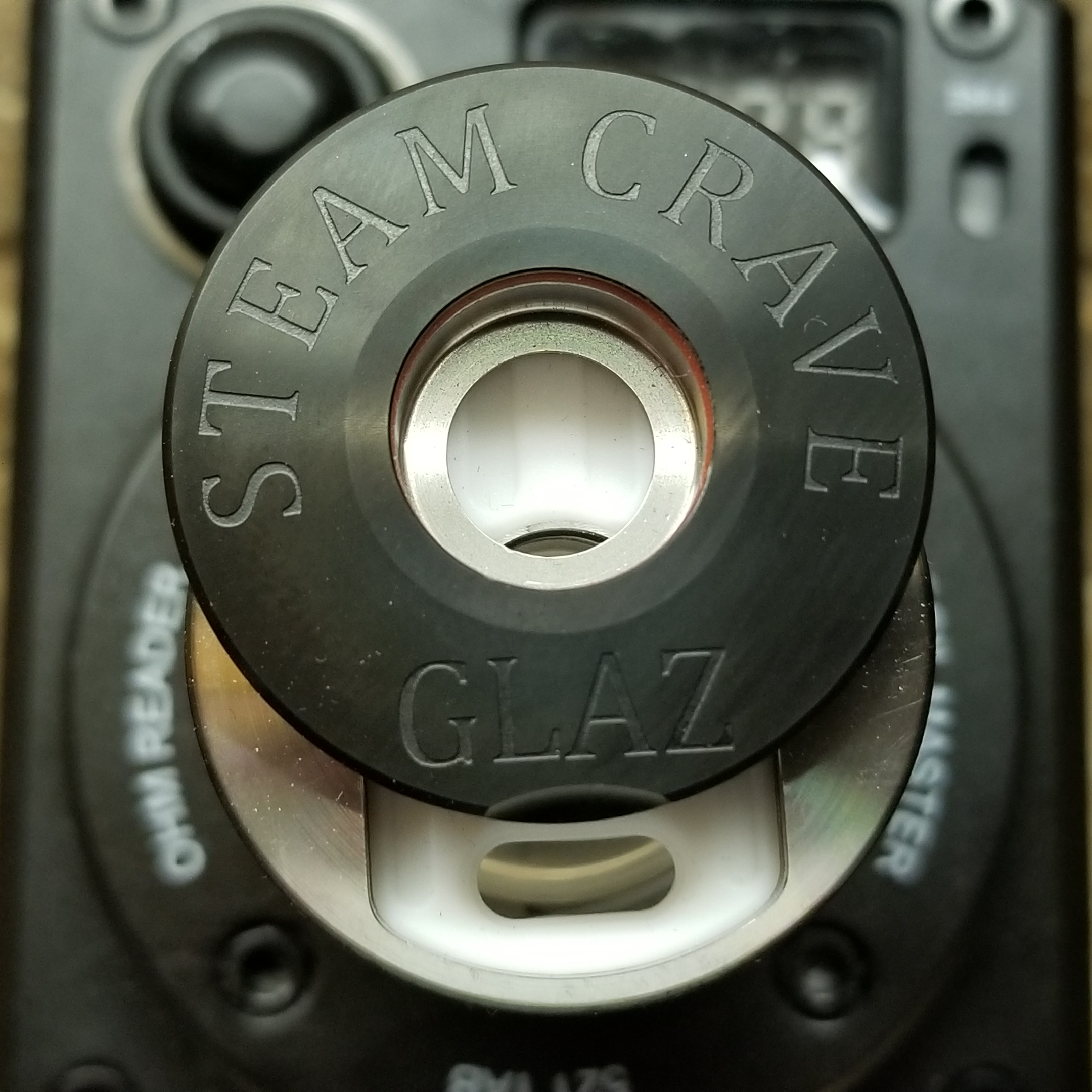 Slide tops are getting more and more popular, I prefer just a normal screw off top. The Steam Crave Aromamizer Plus 30mm RTA being a great example of it, uses a huge kidney shaped opening so you can pour your juice directly from a bottle, this one not so much. With slide tops you have to be careful when putting them in your pocket or a bag, the top does not lock so it can be easily opened. I would suggest using the supplied vape band to stop that from happening. 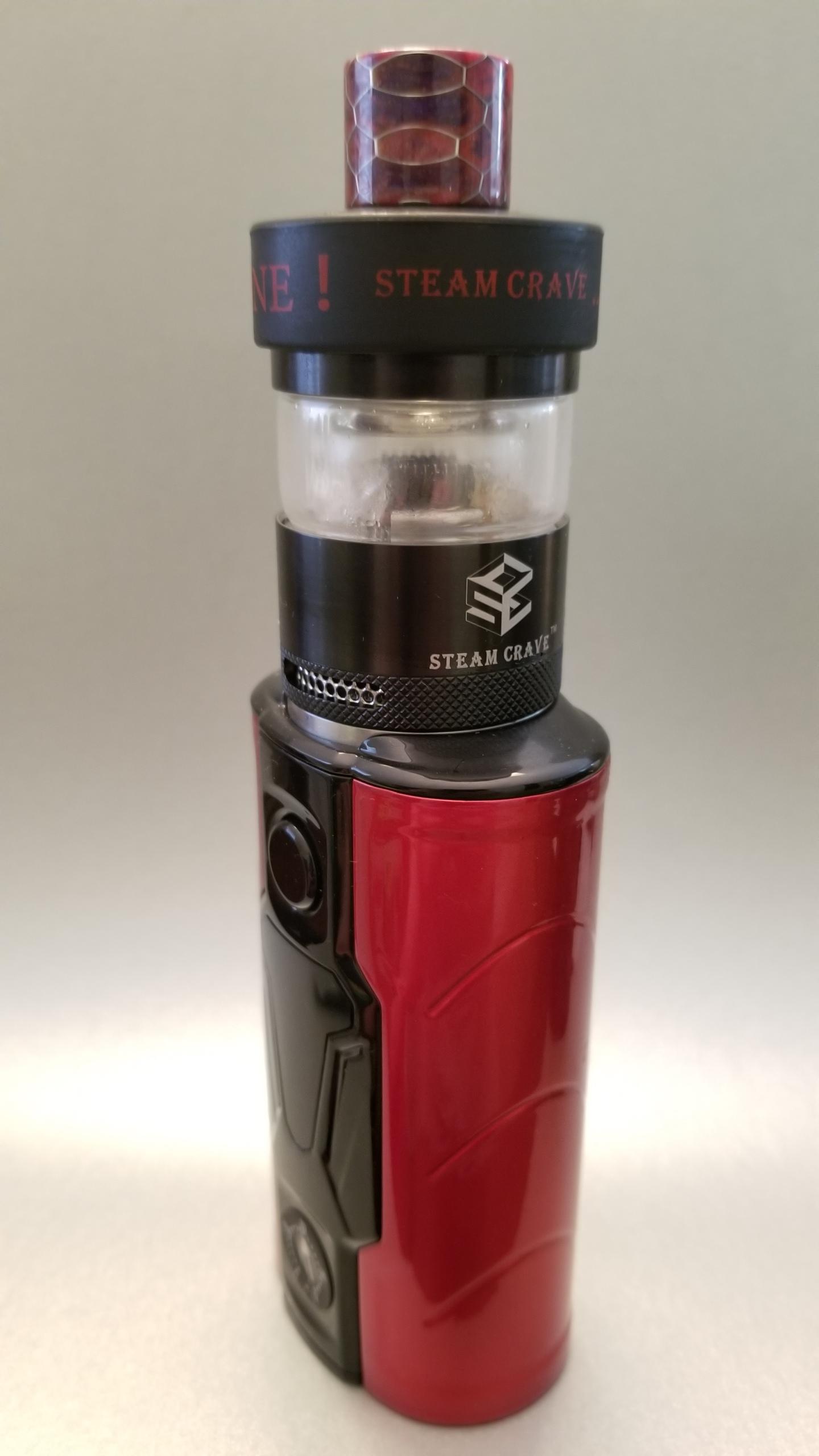 Being 31mm is a little odd but overhang is slight and generally not a bother to me, you may get about 0.5mm overhang on most mods that are setup for 30mm tanks. 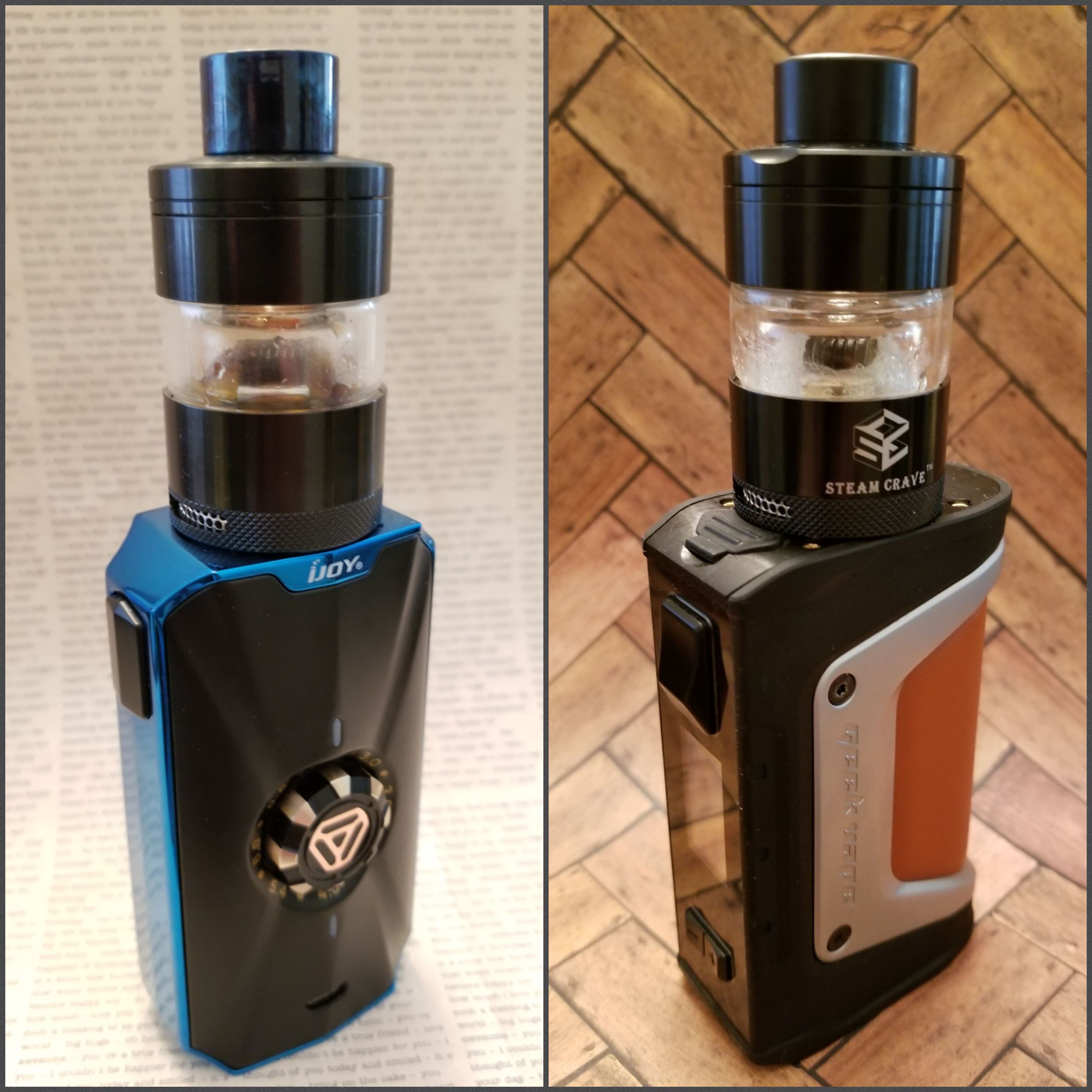 Comparing to the Steam Crave Aromamizer Plus 30mm they are pretty close. 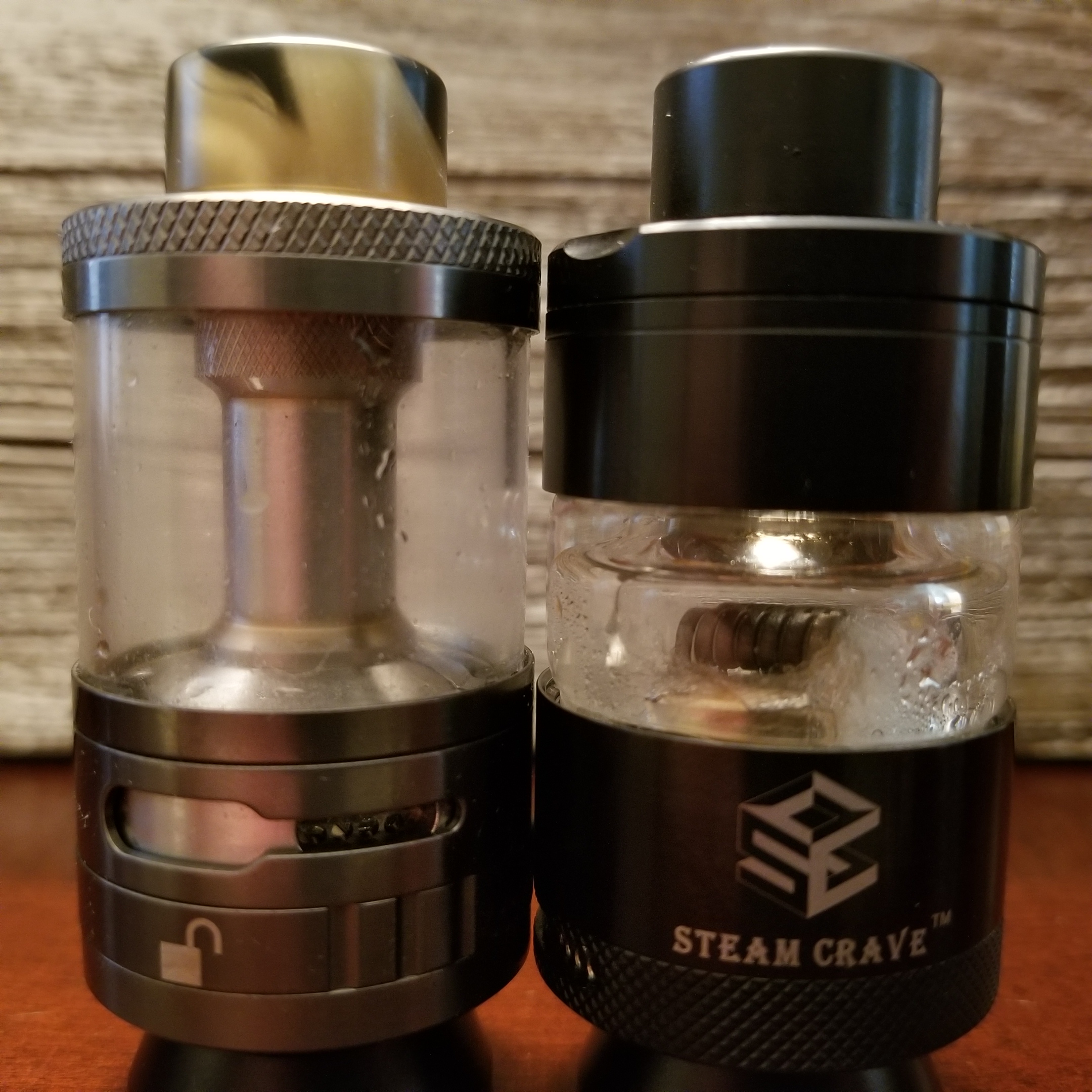 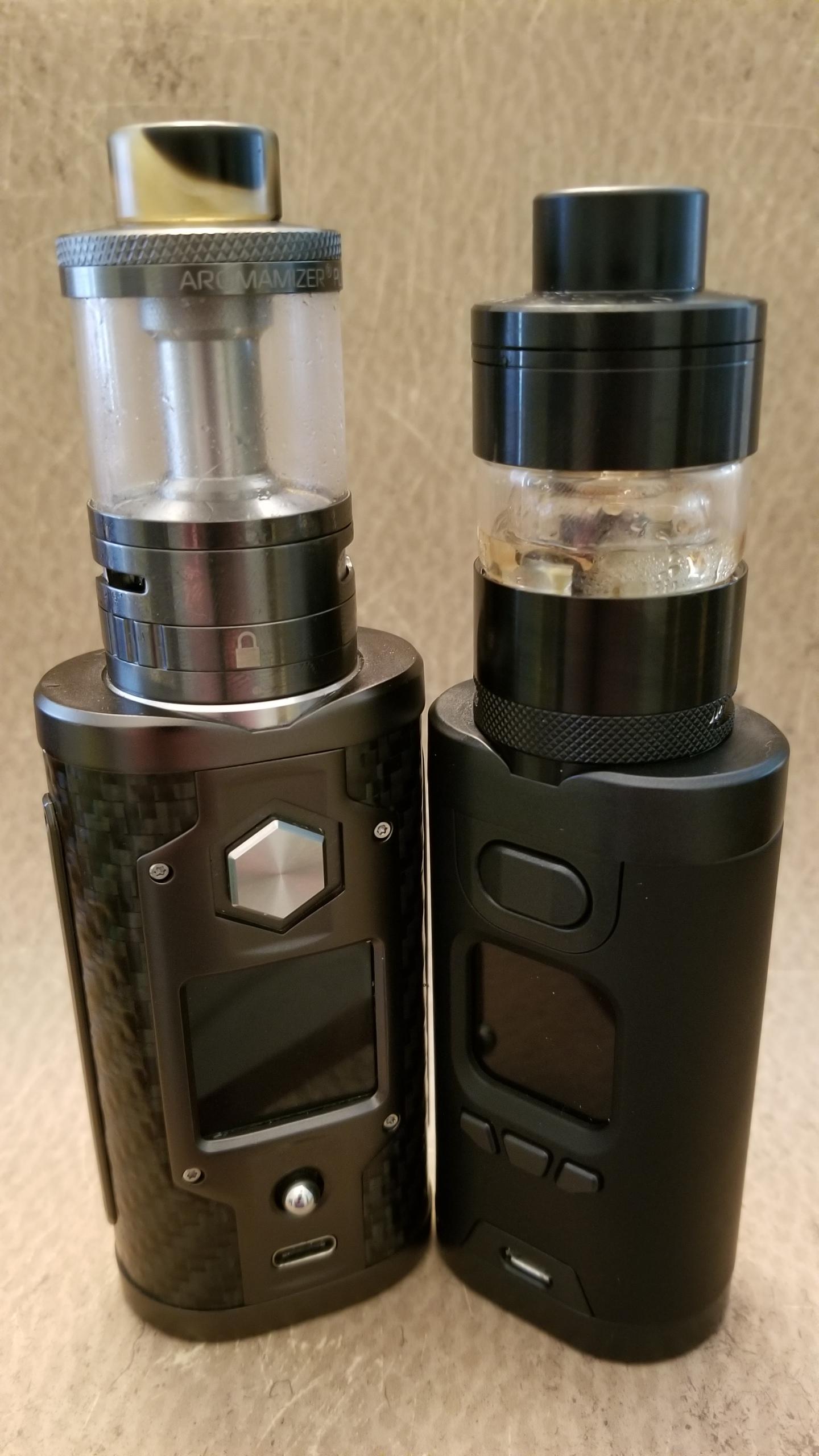 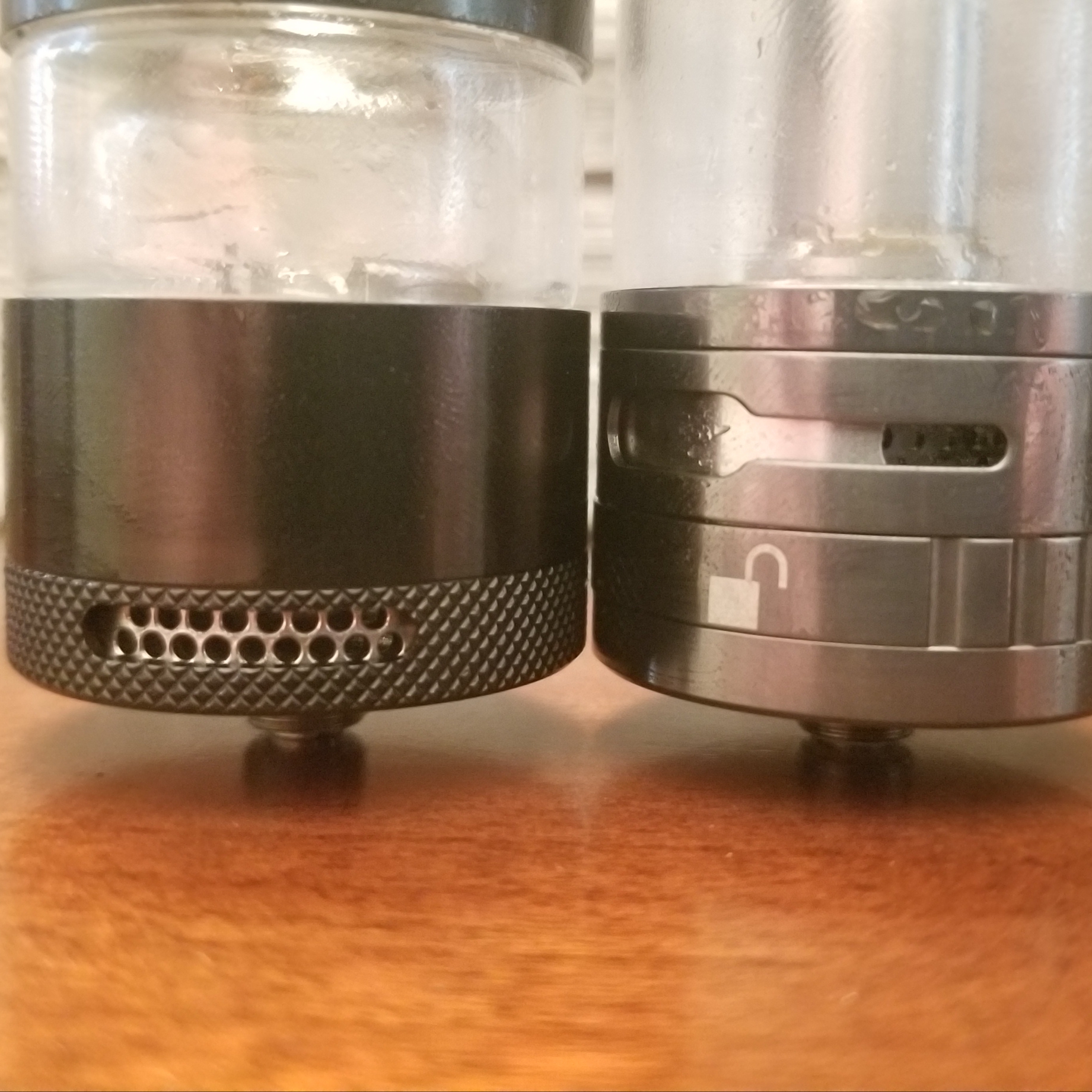 Steam Crave did send me this video link on how to install the glass, I had already done it and had no problems but it needs to be noted:

I tried a lot of builds in the Glaz RTA, both dual and single coil and here are my 2 favorites.

26g core fused claptons with 36g outer wrap kanthal 3mm inner diameter post 8 wrap in a dual coil config at 0.30 ohms. I put the exact same build in the Aromamizer Plus so I could compare. 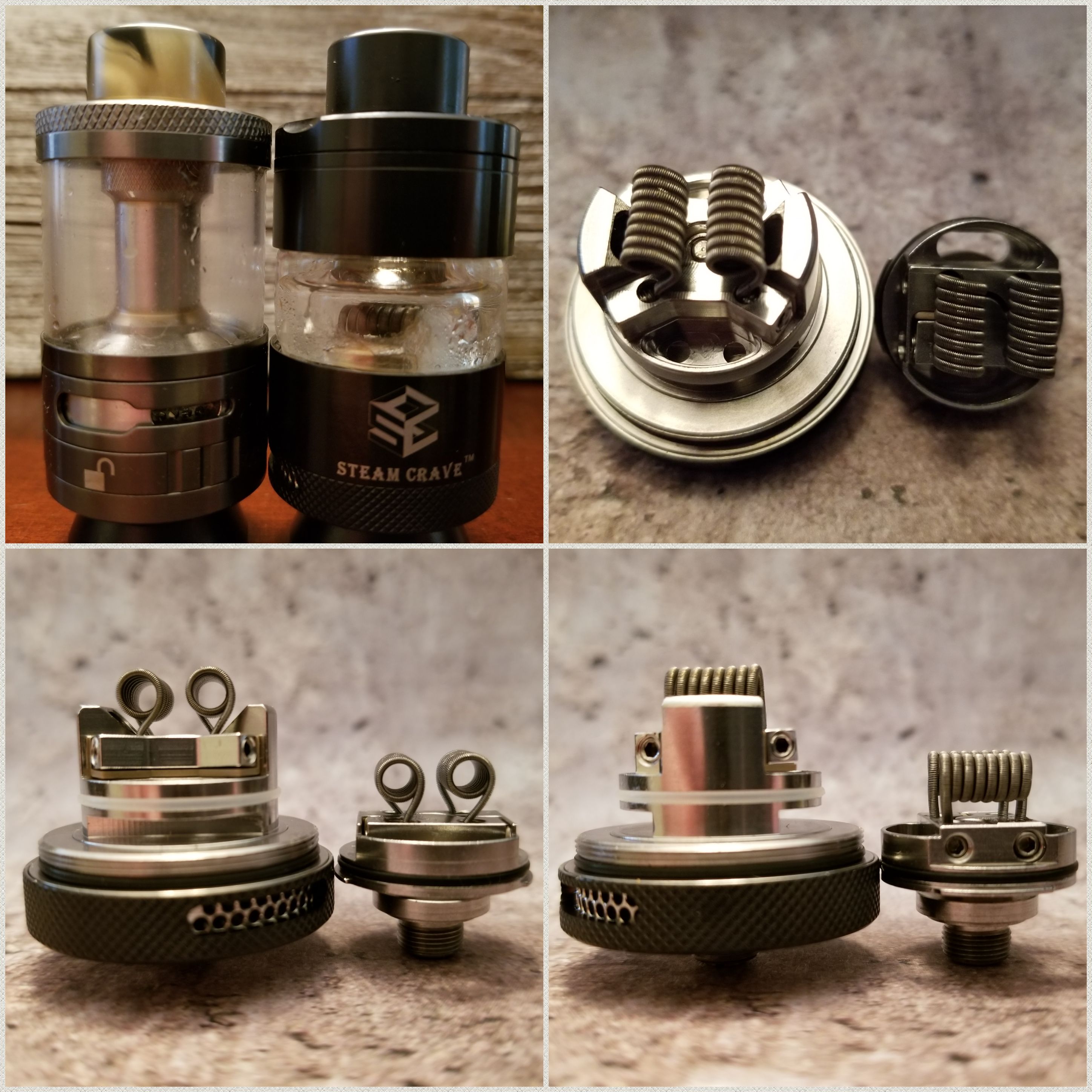 I normally build lower for the Aromamizer Plus but wanted to see of the Glaz could dethrone the king and that build worked best on it. Flavor wise there almost identical, airflow wise not so much, the Aromamizer Plus is much airier. For me and many others the Aromamizer Plus is a flavor chucker and one of my all time favorite tanks. The Glaz is really close, I might give the nod to the AP over the Glaz but was pretty happy with both. I prefer more airflow, just a touch more really so the AP won out in the end but that is just a preference, the Glaz really does chuck flavor. The AP is more build friendly, hard to put a bad build in it but that is not the case with the Glaz, bad coil positioning and the flavor suffers, follow my build above and you will get great results. No need to go over 3mm inner diameter coils as well in the Glaz, it will restrict airflow too much, my 3.5mm ID build only lasted a tankful as the flavor was just not there.

I tried a few single coil builds, why not, it is easy to set up in the Glaz. My favorite was a big staple clapton on a 4mm post. Worked well but there was a performance drop off compared to the dual coil build above. 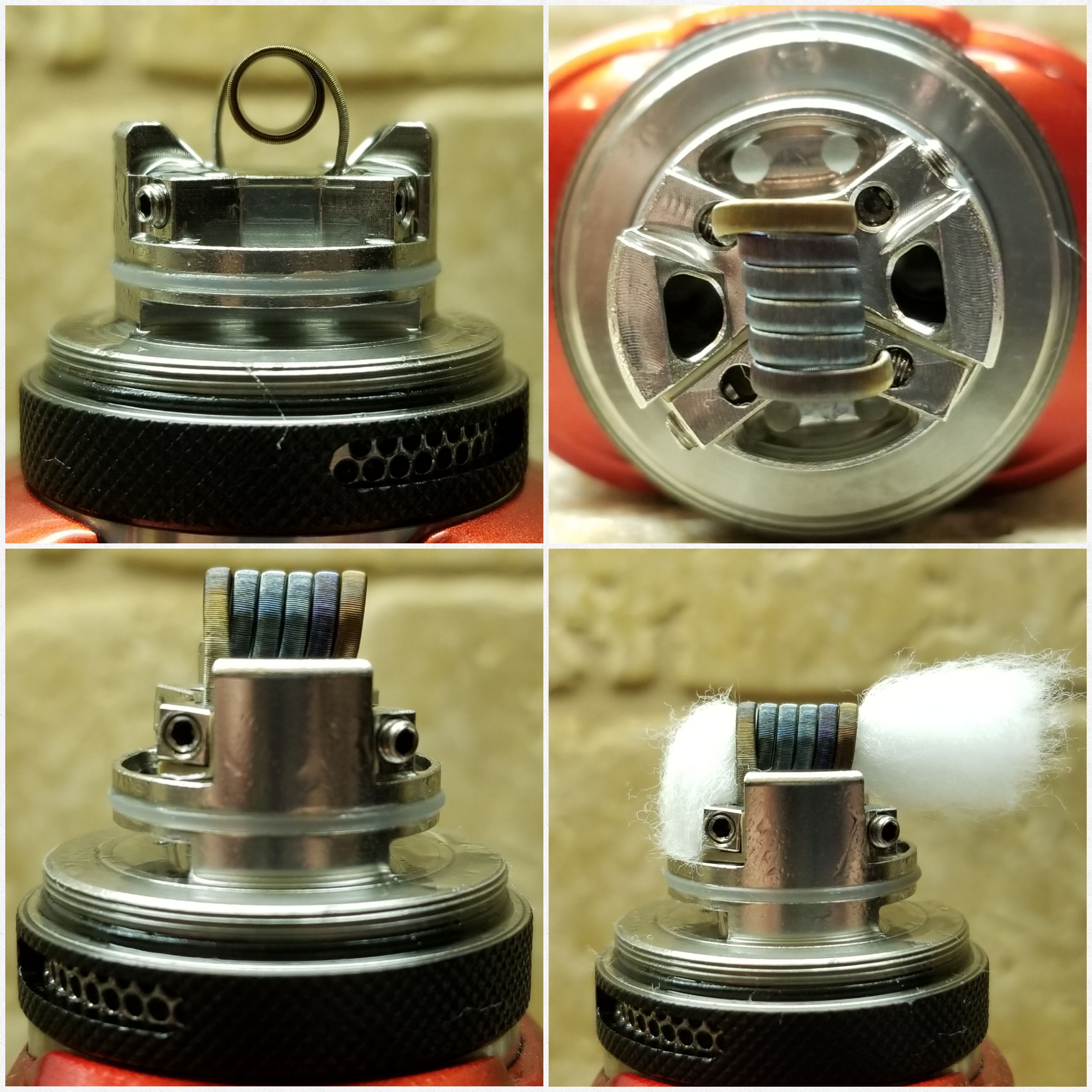 Wicking is pretty straightforward and trust me, you don’t need too much. Just enough to enter the wicking slots and make sure it is not tightly packed, that will affect performance. No leaking problems or dry hits, one of the easiest tanks to wick.

Being a postless deck you will need to precut your leads, I used a coil jig and cut to the end of the barrel and it lined up perfectly: 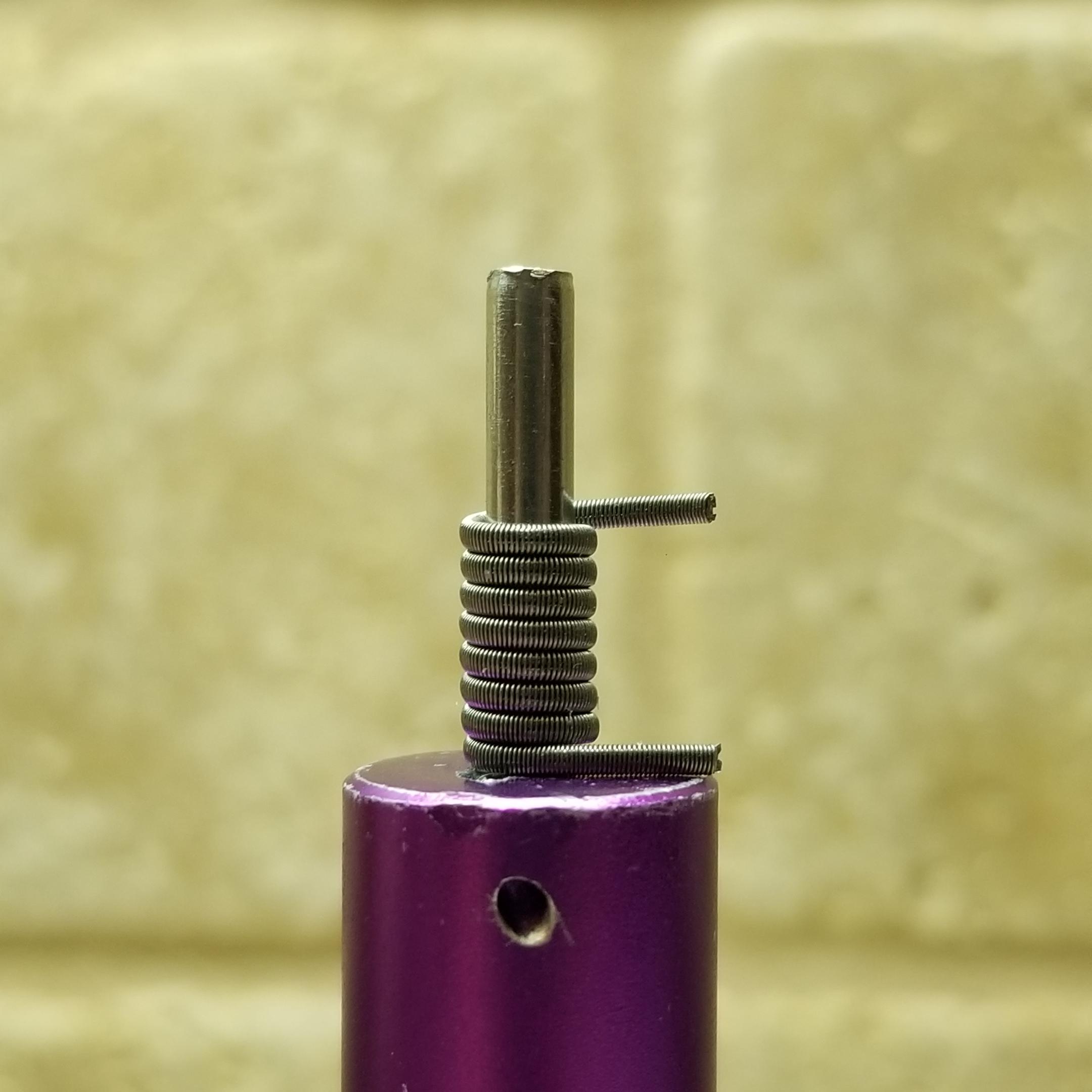 The airflow, gotta get back to that. It is tight not just for a large tank but tighter than most of my 24 and 25mm dual coil tanks. It is a restricted deep lung hit, meant for flavor and it delivers but I can close down my Aromamizer Plus and get as good if not better flavor but with the option to run it wide open, definite con.

As I already pointed out the slide top could be a problem when carrying the tank in a bag or pocket, use the supplied vape band to secure it.

They do not include a spare glass chimney, would have been nice to include a spare in the packaging but they do sell spare parts including the chimney here: http://shop.steamcrave.com/7ml-glass-chamber_p0980.html

Not very forgiving on builds like the Aromamizer Plus, when setup right the Glaz RTA puts out great flavor but bad coil positioning will result in sub par performance. 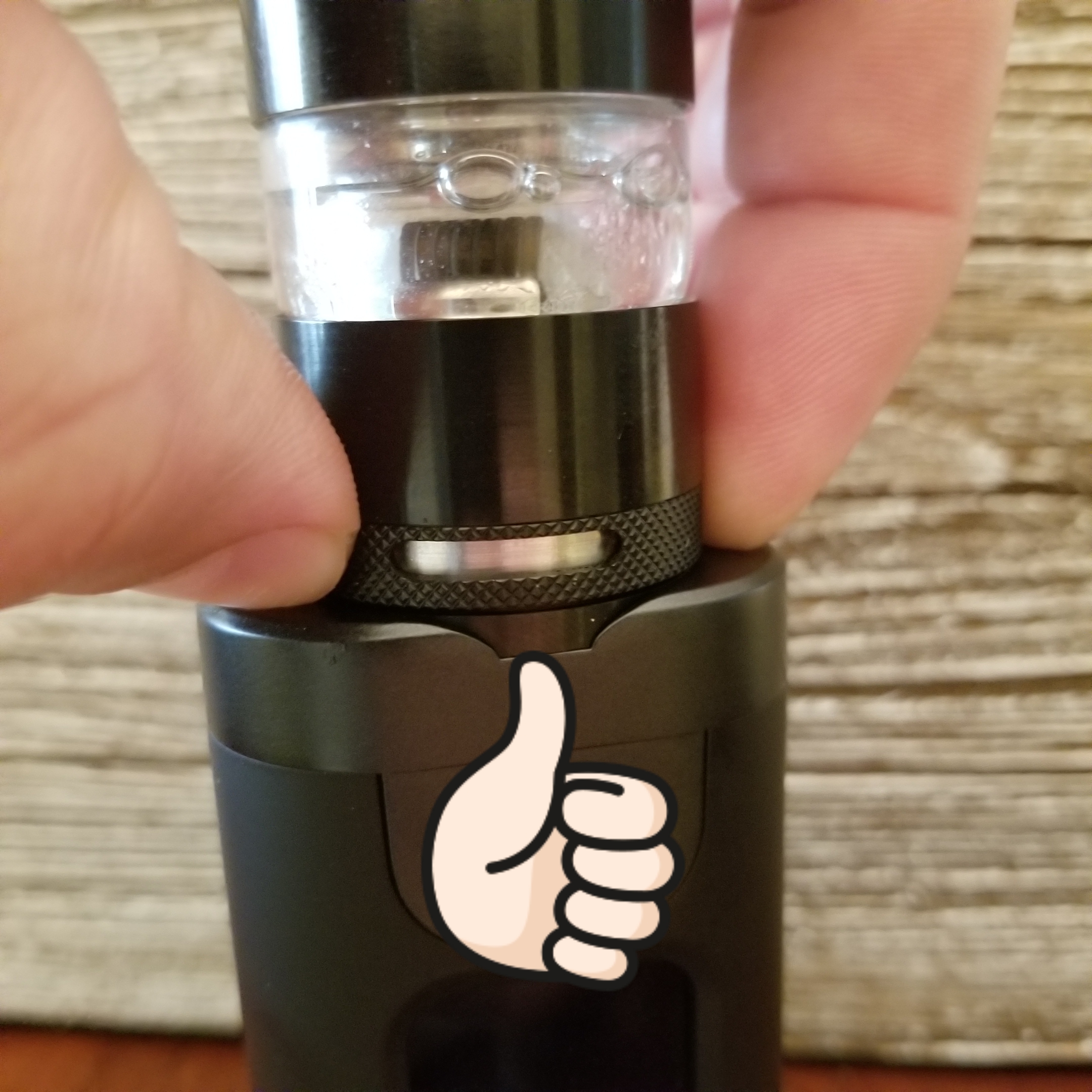 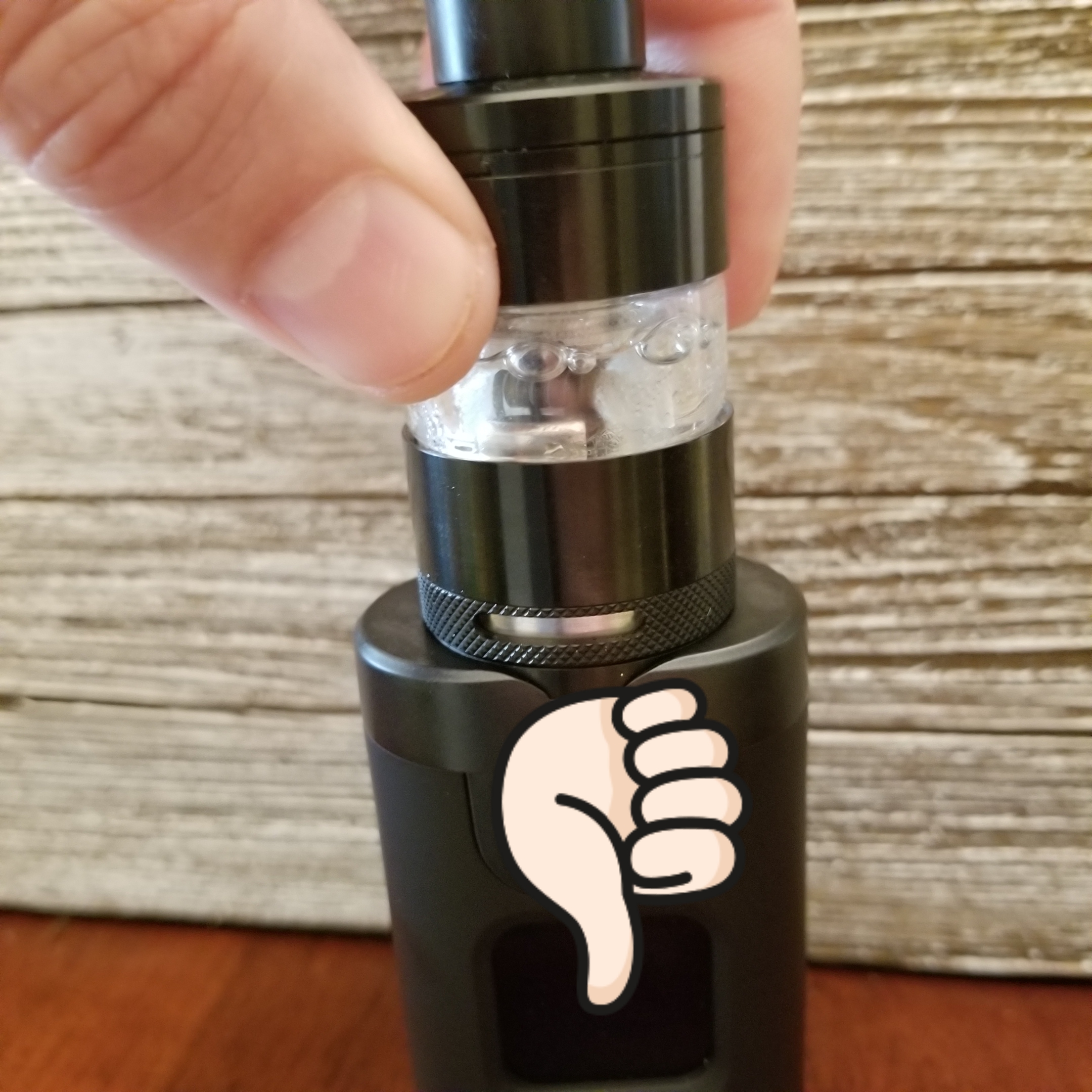 Will the Glaz RTA replace my Aromamizer Plus? Not a chance, I love the AP, one of my all time favorite tanks. I had actually thought about giving the Glaz RTA to one of my friends until I heard that Steam Crave will probably put out an extension kit for it to up it’s juice capacity. I love 30mm RTA’s for the ability to carry so much juice, I can be out all day and not worry about carrying extra juice with me. The Glaz RTA with only 7ml capacity didn’t allow for that, it burns through juice and found myself refilling before I got home.

If you already have an Aromamizer Plus and love it then the Glaz RTA won’t retire it IMO. If you are deciding between the 2 then my choice would be the Aromamizer Plus over the Glaz RTA. Tried to convince my friend of that but he didn’t want to hear it, the Glaz RTA is what he wanted. If you just love Steam Crave products then have at it, is it the best product they have put out?..No, but with the right build it is a tasty tank for sure.

To find out more info check out the Steam Crave site here, they ship out of New York as well: http://shop.steamcrave.com/c/glaz-rta-new-_0372

Spot on mate agree with everything you say. Great tank but not quite as good as the plus.

Spot on mate agree with everything you say. Great tank but not quite as good as the plus.

Yet another spot on review @mjag. To me, the more restrictive airflow is curious to say the least. Including here, and other posts, I’m hearing more what @woftam said, in comparison to the Plus.

When writing a review I often wonder what others are experiencing but avoid reviews until mine is done. It is a relief when someone I respect as much as you brother has a similar experience, your reviews are always spot on with me.

@SessionDrummer thank you brother. I haven’t gone around to read any other reviews yet but plan to this week. The Plus is an excellent tank so not easy to topple it, I have a second on the way. The Glaz RDSA or RSDA,damn, it is just an RDA has a similar deck but more airflow, I would have prefered the RDA deck on the RTA personally, the added airflow would have made it a better tank for me.

Lookin good over here too!

Thank you, much appreciated.

Just curious, what coil material and ohm do you run in your glaz and plus? And at what watt / temp do you vape at with those?

My favorite build on the Glaz is a 26g dual core with 36g wrap fused claptons in kanthal. 8 wraps on a 3mm post comes in at around 0.30 ohms. That build still likes power though so I generally run it at 75 to 85 watts depending on the juice and my mood.

My favorite on the Plus is a bigger Alien build that comes in around 0.12 in the 95+ watt range. Don’t happen to have the particulars on the wire sizes for that at the moment though.

I agree with you, the Plus prefers a bigger build and that may not suit some. I can only relay my experience and preference factors into that regardless of who is reviewing it.

Thanks alot. Gonna check out simmilar builds with em now, see if I can get a better experience out of the plus than what my puny builds have been giving me