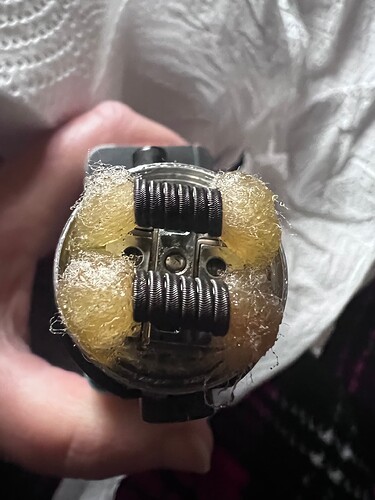 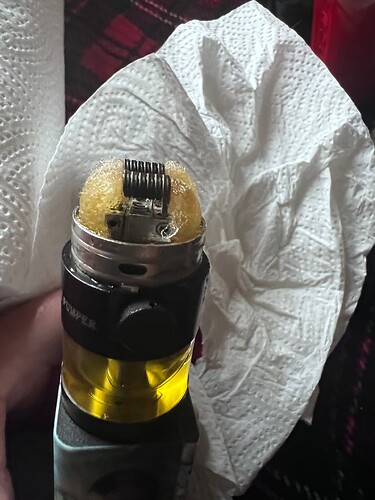 image1920×2560 258 KB
I just received Steam Craves newest releases. The 30mm RSDA and Pumper. Note-I was skeptical of the pumper. I don’t have photos of what’s included but I wanted to share my thoughts.
The RSDA and Pumper come separately. The RSDA comes in either postless or mesh, your choice. I decided on postless. In the box you get the RSDA, spares bag with extra o-rings, grub screws and a squonk pin. You get a manual, a tri-tool and a sticker. The squonk pin is not installed so if you are using it with the pumper, you have to swap pins. Make sure when doing so you hold the deck in place. The quality and machining is typical great quality Steam Crave, consistent with their other products. Clean, and no machine residue. The build deck is nice size. Steam Crave says up to 5mm coils. I opted for 3mm Alien v2’s from Coil Clout because I wanted to see how much airflow there was to work with. The airflow is top and bottom. The top is honeycomb on both sides and you’re able to adjust by row and hole! The bottom is one small Cyclopes style on either side. I cut my leads at the suggested 4mm and installed them in parallel. You’ll place the coils directly over the airflow holes. There is also a series option as well without having to replace anything on the deck. (The manual is very detailed and has diagrams!) There is a decent sized juice well and wicking is easy, just make sure not to thin the cotton out too much at the tails if you’re squonking or you could get leaking. With 3mm coils there is great airflow. The larger the build, obviously the less airflow. I’m very pleased with the flavor! It’s as good as the Aromamizer’s.
Now the Pumper- in the box you’ll get the pumper, a spares bag with o-rings, an extra glass, a manual, tri-tool and a sticker. The quality is typical great quality Steam Crave, what you’d expect from them. It holds 12ml of e-liquid. On one side there is the fill port, which screws open and a very roomy space to fill up. On the other side is the button you’ll press to squonk. Steam Crave suggests unscrewing the squonk button to lube 2 o-rings inside to make it easier to press in. It’s very simple. Loosen the button, inside will be a large spring and you’ll immediately see the 2 small o-rings. I just put some base on, put the spring in place and screwed it back together. Once you’ve done that, you’re good to go, fill it up, screw your RSDA on top of the pumper and put it on any mod that you have that will take a 30mm tank. I love that part. As I said, I was skeptical of the pumper, but it works great. I don’t remember the amount of liquid it pumps into the atty, but the liquid doesn’t get sucked back in. It saturates the cotton nicely. The pumper comes apart for easy cleaning. There’s a diagram of all the pieces in the manual.
You can use any squonkable atomizer on the pumper and you can use the RSDA on any squonk mod (30mm) or in dripper mode on any mod. I’m very very pleased with the pair! The flavor is incredible, depending on your build you can cloud up your room in a minute or 2 lol If you like large atomizers and don’t mind tall set ups (compare to the Aromamizer plus v2 with the metal extension) you’ll enjoy this. I didn’t take pictures because I didn’t think I’d need to but I wanted to put this up because I think it’s worthy of speaking about it. I bought these at Fast Tech for $70 and it took 17 days to get to the east coast of the United States. Hopefully @SessionDrummer will give his excellent detailed review of this so y’all can see builds and other photos. 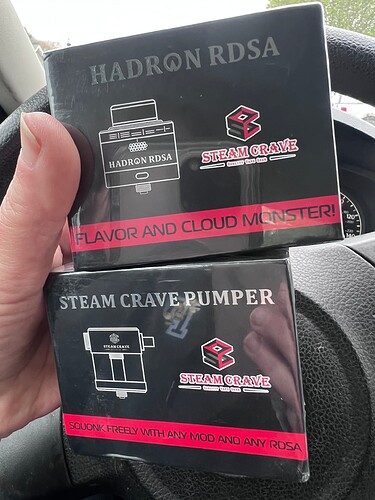 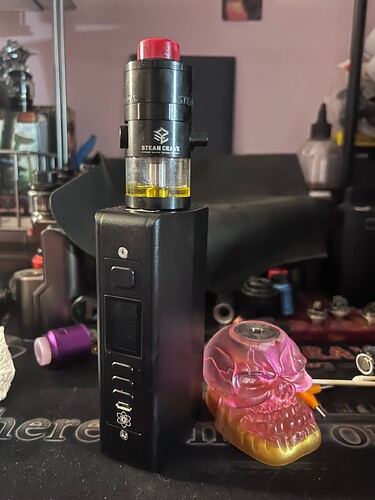 GREAT STUFF @Lynda_Marie thank you very much for posting this.

I wish I had thought too take photos of everything, but I didn’t think I needed to. I’m that impressed with it so I was excited to share! I think you said you ordered them right? Looking forward to your thoughts!

I think you said you ordered them right? Looking forward to your thoughts!

Mine are on the slow boat now.

Thanks for your views on it. To me, I’m just annoyed that Steam Crave wants to ignore Ragnar users in their own offering.

I don’t use my Ragnar that often, I do like it though. Maybe they’ll make a squonk mod or pumper for that next. This isn’t gimmicky, it’s a great thing to have. Imagine one for the Titan

Fast Tech? I couldn’t believe mine were here in 17 days! I’m expecting a surprise package from Wotofo and they sent it NZ-post… now that’s a very long slow boat ride. I think it took time in Amsterdam to visit some cafes

Well a mod to match after removing the original Hadron would be nice.

Man, I love my Hadron 220’s…I have a backpack for it, I’ve never used it though. Do you need a backpack? It’s black.

I need the mod itself. But that has a long tail attacked.

Yes, aka Slow Tech, BUT, we shall see…

The Hadron Pro DNA250C is really nice. Fits a 35mm. I’ve been using it for a while now. It’s a lipo battery which is removable. I’m thinking they might have a dual 21700 model as well. I feel lucky I was able to find the original in gunmetal a year ago. I love those mods.

In the UK it 's called the Pro and the dual 21700 is the Plus. If it fits the Ragnar, well that’s is nice but certainly not promoted, or mentioned.

I checked the launch specs of both and though it is very fine but a clarification was needed. Though them being clear would have cost me an extra £500 this year.

True and the Plus and Pro never showed a Ragnar on them: Did smell of an idiotic PR team.

I like the idea of the pumper but i dont think anyone makes any 30mm single coil RDAs for me to use it with.

Steam Crave made a 30mm RSDA with either a mesh deck or postless deck. It’s 30mm. It has fantastic flavor! I have some 30mm Asgard RDA’s that’ll sit nice. A 28 would look fine too. I’m really looking this set up!

Steam Crave has an active Facebook Steam Crave Fan’s page. They took input from the fans and were pumping out new products one after another based on what their loyal followers want to have. Everyday people post pictures of their Steam Crave hardware in every imaginable configuration. The Ragnar’s have been up top on the new Hadrons as well as ever other new and old mod, and every color combination.