I got to thinking about steeping and room temperature. I have a cpl rooms that I close the doors in the winter and dont have alot of heat going there. I happen to have my steep box in one of those rooms. The question is: How does temperature and humidity affect the juice? I’m sure it has some kind of effect. I was thinking that the warmer the temps the faster it steeps. But will that also degrade the concentrates faster? Does anyone have any ideas or thoughts about this?

I was thinking that the warmer the temps the faster it steeps. But will that also degrade the concentrates faster? Does anyone have any ideas or thoughts about this?

I think that warmer better for steeping, as for my flavors they all sleep in the fridge, humidity is not a big question as it is not wine🙂, anyway i keep my steeping juice in a warm (room temp).

Steeping qualifies as a chemical Rate Reaction, which are by definition affected by temperature. Too cold might slow it down while too hot might cause oxidation/degradation

I think that warmer better for steeping,

I was thinking that too. So maybe for the ones I want steeped faster ill put into a warm room and keep the older ones in the cooler room

I’ve steeped juices in 2 main places. My bedroom closet (super warm, average probably 73+ degrees), and my vape cave (somewhat cool, around 68 degrees consistently) and I’ve never noticed a difference in steeping time. If there was a difference it was too little to really matter. I think the slight variance in room temps is too small to make a real difference. If you’re steeping in a fridge or in your car in the summer then I would assume that you’d notice a difference, but for the average person’s room temps I think it’s all going to be pretty close.

Handbag, don’t forget the the handbag which if it is anything like my wife’s it opens a portal to another dimension and it is hard to even guess at the temp there.

Handbag, don’t forget the the handbag which if it is anything like my wife’s it opens a portal to another dimension and it is hard to even guess at the temp there.

I’ll seckond that thought, a woman’s hand bag definitely defies the laws of physics. It just not possible to put that much stuff in such a small bag. And still have room for the kitchen sink.

Unless of course it’s a woman’s purse. 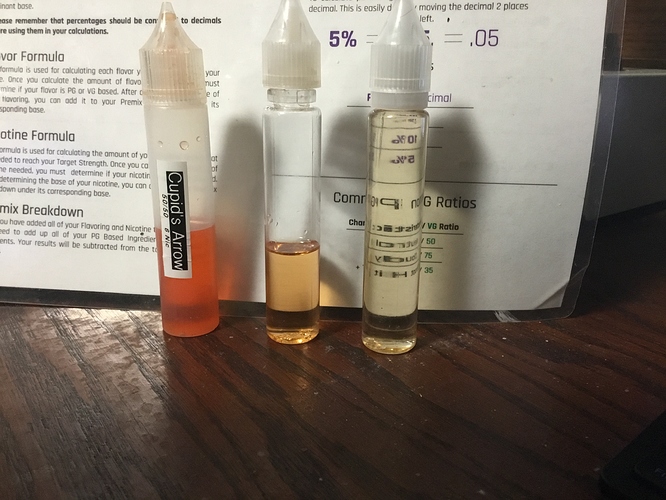 Bottle on left is probably older than one month

Two bottles on left since creation are in my vapor case which goes with me wherever I go at home it sits on my desk , when I got out it sits in my armrest console in my truck. Which is a little heat to help the steep.

Bottle on right sits on my desk in the shade at room temperature,

Usually takes about two weeks for liquids in my travel case to start to change color. From the almost clear color of the mix.

Bottle 1 . Flavors have blended very well to produce a delicious aroma
Bottle 2 . The strawberry and the cream still have separate aromas
Bottle 3. Just cracked the seal. The strawberry is still the dominating aroma

All the same juice?

Yea all three are the same flavor. Edited and added the two on right were the same mix

As well as the differences you mentioned, re:temps, it should also be noted that the middle one is also having the air refreshed on an ongoing basis. The colour change could be down to that as well as the temps. I’ve noticed some of my mixes change colour over time, and others hardly change, and that is usually down to the one of the flavours reacting with “something” (or possibly the nicotine reacting with the flavour). However, with two bottles of the same mix (I electric whisk my mixes, then decant to plastic bottles) the one that is being used darkens a lot quicker (which in notable because usually less liquid of a given colour looks lighter as it has less volume to diffuse the light).

Kinda like a science experiment! Thank u for posting!