Steeping juices and tasting them: question about pipette bulbs

Personally, I always use glass bottles, on account of their non-reactivity , but this can be a faff , especially when steeping a juice for repeated testing. over a period of several months (as I often do with the MF flavours)

The prioblem is this: if you leave the dropper in the bottle, then the flavour escapes throgh the rubber teat. That’s not just theory. It really does! I’ve occasionally stored the same juice both ways: with dropper in bottle, and with closed cap,. After a few weeks, the difference in flavour can be startling. So i don’t intend to just lazily leave the dropper in place, ready for the next taste, not ever again. Much as I would like to.

However, if you put a closed cap back on the bottle , you then have to clean your dropper, don’t you? And cleaning droppers is a serious faff. I therefore don’t taste my mixes as often as I’d otherwise like to.

I’m now wondering if this might be the solution?

They say that the PVC bulb is “oil resistant” . That’s of no particular use to us, ofc, But I’m wondering if it might also be a whole lot less porous than rubber? And if other merchants sell a similar thing (8ml being rather too small for many purposes)

. I’ve tried scouring the net for the answer, ofc, but can’t seem to come up with the right search terms

Thanks for starting this thread, I’ve often wondered about the right solution to our problem as well.
The issue with the rubber seals has put me off and made me go to plastics… but now I see the problems with plastics (lingering flavors) and it only adds to a massively growing global problem.
Not only that but it’s proven that PET bottles leave microscopic plastic particles in the contents of the bottle. Just the though that those particles get in my RDA and I’m vaping molten plastic is (to say the least) a little off-putting as well.

I’ll be following this thread to see what comes up

Not only that but it’s proven that PET bottles leave microscopic plastic particles in the contents of the bottle. Just the though that those particles get in my RDA and I’m vaping molten plastic is (to say the least) a little off-putting as well.

Yeah, and people worry about a bit of diacetyl in their juice! then they happily store it plastic bottles!

I’m a tad concerned about the caps too, they tend to have polycone sealers or EPE liners. I don’t know know if I should be concerned about those materials, but I haven’t yet been concerned enough to look it up, TBH. I’ve contented myself with the knowledge that if you store the bottle upright, the liquid rarely comes into contact with the cap. Plus the thought that we wouldn’t dare breathe, if only we knew…

I suppose this brings our bulk VG containers into question. I know mine is in a 1 gallon(~3.8 liters!) plastic jug. Do you transfer into glass jugs for storage?

Nope, cos there’s a limit to how far I’m willing to worry about these things (thought I made that clear?) And VG isn’t acidic. I don’t transfer any of the flavour concentrates that come in plastic bottles into glass ones either, though I often think I should. That “too much faff” factor comes into it there.

Raises a question in my mind, anyway. If storage in plastic bottles is not so good, why do all the manufactures do it then?

Cause it’s cheaper and they don’t give a shit, most companies anyway. We’re the bastard red heads of the flavor world, there are only a couple companies that actually make flavors specifically for vaping, and e-juice manufacturers are mostly only concerned with profits, that’s why you can find juice on the shelf of your local b&m in every color of the rainbow, and food coloring is an obvious thing that could be removed from juice to help lower health risk. Last I checked, LA watermelon costs the same whether it’s colorless or bright pink, but almost every watermelon juice on the shelves around here has that pretty pink glow lol

they don’t give a shit, most companies anyway. We’re the bastard red heads of the flavor world

So they want to kill their customers. At least the vaping ones. I see, thanks.

So they want to kill their customers. At least the vaping ones. I see, thanks.

Haha. But @Fishaddict420 had a point, there. The food flavouring manufacturers all sell their flavourings in glass bottles; because all of we consumers(or most of us, at least) know by now, about toxic chemials leaching from plastic containers into foodstuffs. LPDE and PET (which the vape guys generally use) are supposedly safe in this respect (They are not antisocial monsters, see? ) but yer average consumer is deeply suspicious of the lot by now., and who the heck can blame her?

(I’m not trying to call myself an average consumer, mind, I’m actually a regular weirdo)

But all this is pretty much off-topic. The real question is this: having made the entirely sensible and ever-popular choice of using glass steeping bottles rather than plastic, how then do you prevent the flavour escaping through the rubber pipette bulb ? short of swapping back-and forth between pipette cap and closed cap? Some people really want to know!

swapping back-and forth between pipette cap and closed cap

Seems the only answer, really. I suppose this is why MF includes hard caps along with droppers with some of their flavors.

I suppose this is why MF includes hard caps along with droppers with some of their flavors.

Yep. You can tell which of their flavours are especially volatile by the presence of the closed cap. Ignore that hint at your peril! (the peril in this instance is of a wishy-washy, flavourless vape )

So they want to kill their customers.

swapping back-and forth between pipette cap and closed cap?

Perhaps leave the good cap and use cheap disposable pipettes, single use?

And the Special Hug Smiley Award for this thread goes to @Plunderdrum for an actual constructtive reply. Yaaay!

Plunderdrum. I have seriously considered that, environmentally obnoxious though it would be of me, to actually increase my disposable plastic usage, whilst everybody else is cutting down !

Indeed, I actually went so far as to order some. Or rather, I meant to. When i opened the package , I found that I’d accidentally doubled my order of needles instead

I thought about the waste aspect as well, and seeing that DIY usage of plastic pipettes is a speck of plastic dust compared to the food and beverage industry, I don’t think we are too much of a worry to the planet. That said, perhaps we could make pipette sculpture art with them! Repurposed waste into something fun and thought-provoking!

i rinse em, squeeze DW in, do some shakes, squeeze out water, repeat about 10 times. They will eventually crack and no longer work but they do last quite long.

i rinse em, squeeze DW in, do some shakes, squeeze out water, repeat about 10 times. They will eventually crack and no longer work but they do last quite long.

You just defeated the whole object of disposable pipettes!

BTW , I just dound some advice from TPA about flavour storage, quoted on another thread

but even with HDPE plastic, I really wouldn’t recommend storing them for longer than a month or so… It’s much better to store things long-term in glass. also, it is not a good idea at all to store the flavors with the plastic eyedropper caps on the bottles. The rubber that’s used with the eyedropper’s is extremely soft and interacts with a great many materials. If you try to store your flavors with these rubber dropper caps attached you will most likely ruin both the caps and the flavors.

so if plastics aren’t good and glass bottles have issues with the caps… what IS a good solution? 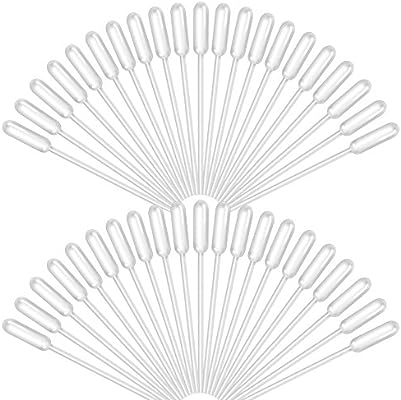 I am liking these a lot. If your not to heavy handed you can get very small drops! Small as in my scale will not measure until you do 4 or 5. Blowing on the scale and then letting it settle will sometimes register a change but i’m not sure how accurate that would make it!

so if plastics aren’t good and glass bottles have issues with the caps… what IS a good solution?

I’m hoping that a really good solution will emerge from this thread. I’m not so thrilled by the discovery of PVC bulbs now. Sorry, I’ve lost the link to the info i was recently perusing, but it looks like something you really don’t want to risk making contact with your juice

Maybe better check what those transfer pipettes (above) are made of?

[EDIT: I just checked , They;'re made of polyethylene ]

If your not to heavy handed you can get very small drops! Small as in my scale will not measure until you do 4 or 5.

Thanks, but I’ll stick with 1ml syringes when I want to measure such tiny amounts,

Those pipettes you linked to might be really handy for tasting purposes though. My only concern is that they’re designed for essential oils and make-up apparently, so I wouldn’t assume they were safe for dispensing juice. That said, the juice won’t be in contact with the things for very long! so dunno if that’s really a concern or just a quibble (more likely)