Stevia - DIY or pre made?

How much once mixed is comparable to 1ml of TPA sweetener?

I just put it in the calculator as if it is any other flavoring…I generally use it at 0.25%

Looking at the ingredients in the Stevia Pyure bottle, something tells me that the recipe has changed since I no longer see citron vinegar or citric acid listed, so I decided to make the Pyure clone created by @Chewy. I’ve still had few tests with this, but I have the feeling that it’s too weak! I’ve had a commercial Pyure in the past, and at the time I realized that at the level of strength I could compare with Capella’s Super Sweet. That one made me use it, I did not go beyond 0.5% and I thought it was extremely sweet … that with this clone, I re-mixed the same percentage, and did not think I practically sweetener!
I returned to this topic to read a little more about the subject, and @bluenose63 said that it mixed 1 gr. for 9 mls.
That said, it seems to make more sense, and I find that the percentage of Stevia in the clone is way below that!
as for the percentage of vinegar, it seems reasonable, following the words of @ozo, which adds the amount of 5 drops, however, citric acid, also seems to be able to rise a little, compared with the 5 drops of lemon that he adds. But in the latter, I am in doubt because it is not the same ingredient!

However I would like to ask the question, why mix Stevia in VG?
have any advantages in the mix, or is it simply not to add PG in the mix?

Ok, based on the comments read here, my 30 mls. of “Pyure Stevia” came out like this, it is left to compare with the true one, that I can not, since I do not have the Pyure Comercial!

I have to test this and know if it sweetens like Super Sweet, if it makes the fruits shine, and if do not fuck the reels. lol

I use both, the pyure bought from amazon and my regular powder bought from whole foods and diluted in pg as well as VG. I do like either of them a lot, but I use only 1/2 a drop up to 1 drop per 15ml. Its not the same as super sweet, you would have to dilute super sweet to get the stevia sweetness, by then you might as well just use regular sweetener. Don’t get me wrong tho, stevia is sweet but just not as in your face screaming sweet in comparison to supper sweet and EM. Easier on the coils too, so much I can tell but I still try avoiding it as much as possible.

And your bottle of Stevia has still been written with cider vinegar and citric acid? because I was going to order a bottle of Pyure and in the ingredients only vi I mentioned with water!

As I haven’t tried the original Pyure, as its near nigh impossible to obtain here in the UK for whatever reason? Was the basis of the clone.
I played around with the citric and ACV to get a nice balance without distracting from the stevia too much. Basically from what I gather the CA and ACV is more of a natural preservative but for us mixers it has the added bonus of helping our flavours, especially fruit based.
I found the higher I went in the stevia powder the heavier the almost licorace taste became apparent.
Hence why I settled on my % used.
Works for me anyway but I always say play around with it to get your desired taste.
Thanks for trying out!

Yea my bottle is older since you don’t need much. I haven’t looked at the newer ones but it would suck if they changed the formula

Your clone is a great sharing for anyone who craves an sweetner Pyure … But as I like to follow the creator’s recipe, with its clone I think I’m missing some final taste. The problem was not to load with more percentage of sweetner, but to try to have a force equal to the original because it wanted to mix the strawberry base of Pro_Vapes.

I was going to make some mixtures today and I would use my pyure diy I made at 15 days, and it was full of white “flakes” in the bottle. The day I made the sweetener (mixed in the magnetic stirrer) it was clean. Does anyone know why this is so? Will I have added too much stevia? Was it ACV, or citric acid? I did not keep it in the fridge, but in a cool, dark place!

The stevia you used was it 100% REB A or did it have Erythritol in it or a bulking agent added ?

if it has Erythritol in it you will need to dissolve it in VG as Erythritol will not stay dissolved in PG. If it has a bulking agent you will likely have to get different stevia.

The stevia that I am using is the powdered Pyure, the moment I mixed it in the magnetic stirrer, it was well dissolved, but now after 15 days, I have a kind of white residue on the bottom of the bottle

Do you still have the label from the original packaging - it will likely list if it has bulking agents or Erythritol. 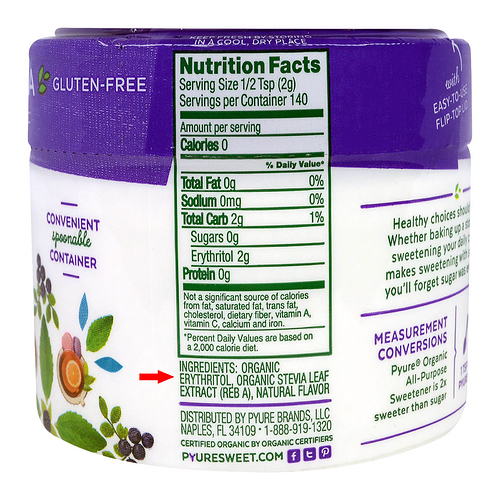 Maybe it was too much powder of stevia in the mix with PG (1gm / 9ml), I’ll try with less stevia. Thank you for your help

oh yes that maybe the case i mix at 4%

After reading this today I checked my store bought pyure liquid stevia that comes already mixed in the little plastic bottles. I have that one in my fridge and a 5ml amber glass bottle in my mixing shelf. Held it against the light and I have the same particles in it, looks like coconut flakes/shavings right? I shook it and it became fully milky with little foam on the top. Dumped it down the drain and poured from the original bottle that’s in my frige into the glass bottle, that one is clear. So it seems that it does need to be refrigerated at all times. Hope it helps.

That’s right @eStorm, they look like coconut particles. Last year I bought a bottle of liquid Pyure, and I respected the manufacturer’s advice, and put the bottle in the fridge, but as I used very little, after 1 year +/-, I went to use that pyure that was in the fridge, and I threw away by be with these white particles. As it was an obsolete liquid, I found it normal, but this glass bottle with the clone pyure, was soon after 15 days…

This looks fun. I have a package of Pyure powdered REB-A extract that I haven’t tried but once to dissolve in VG, I’ll give it a few more attempts to get it right, but this looks like it might be a better solution. No powder particles to cloud the mix.


Any thoughts on possible negative outcome to making a tincture like this and vaping it?
1 Like
← previous page next page →