It’s ages that we know about it, ages that people talk about the fact the Sucralose it’s not exactly healthy even if used for food…:

A study on the subject, dedicated to vaping hasn’t been done, here we go with the link to the complete study that’s been published a couple of weeks ago:

As more of those studies like this are published more knowledge we have and more choices we have on what to do with it, ( A choice that smokers don’t have…) for us is a good thing we can improve and make our vaping healthier.

They practically say that increasing the sucralose percentages on a 1.2 Ohm, 20W e-cig test device (have a look at the full study for details) at different percentages sucralose degrades and starts forming aldehydes; Propanal, acetaldehyde, glycolaldehyde, and acrolein: 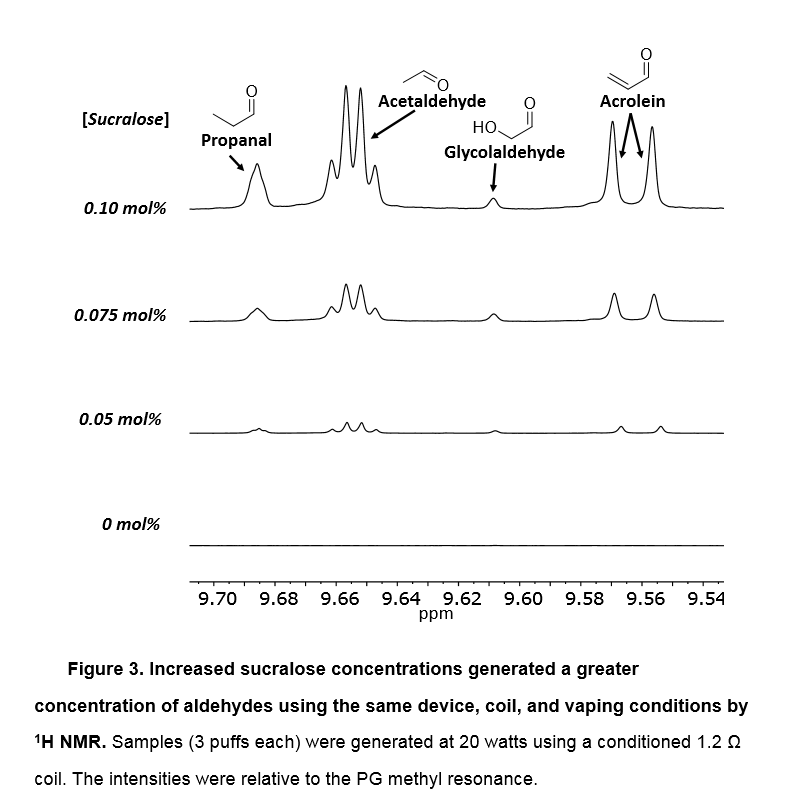 The diagram shows that at 0 percentage there are no aldehydes formation, see below the exact percentages of the formation when increased to 0.10mol%: 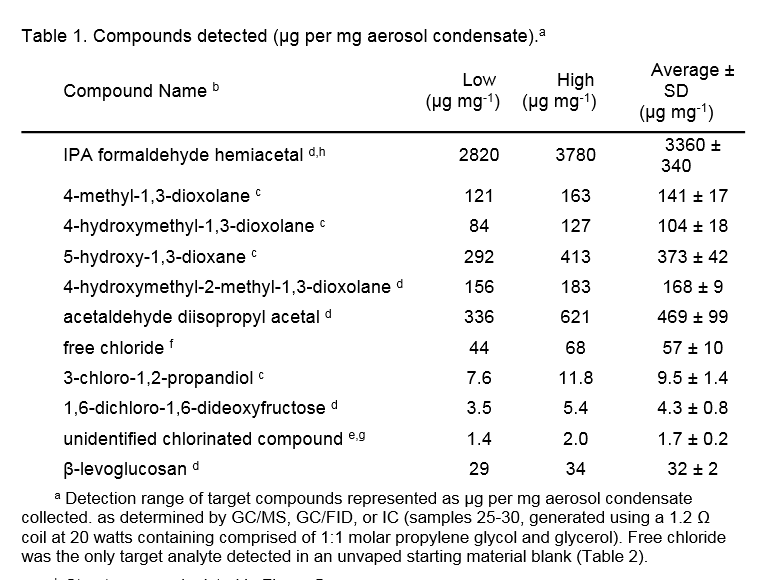 There are, a few consideration that have to be made about this study, but I’ll have a look at those later.

So what’s the deal?

What I’m worried about it’s not that this study can be right or wrong, but the fact that the medias will jump on it and use it against us… Let’s hope for the best.

The other thing I would certainly be worried about is the “Off the Shelf” e-juices, unfortunately all DIY’ers know that manufacturer have happily used sucralose in their mixes without caring if healthy or not, but at their selling figures, the best thing to do is ask, or check the label, if the e-juice we (they… not me, it’s years I don’t) are buying has sucralose and at what percentage, I hardly think a seller/manufacturer will ever do that and I don’t know of many… that do (well Charlie Noble does)

We all know that sugars are not exactly healthy for vaping and DIY’ers steered away from Sucralose ages ago (At least a couple of years we talk about this thing) and changed it to alternatives like Stevia or none at all, there are quite a few ways to avoid the use of Sucralose, we know them… (if you don’t… use “Search”

Flavour manufacturer usually dont 'use sucralose in their flavours, let’s have a look below at TFA’s flavour usual specsheet link:

If you “list” the flavour and look at the compounds, you’ll rarely see sucralose to start with (you won’t see Strawberry and the like, probably externally sourced) where do we see Sucralose? Quite clearly in their Sweetener:

At what percentage??? <5%!! Let’s go back up and look where that 5%l (0.05mol%) stands at, even vaping a straight flavour (that none of us would do!) the aldehydes formation would be extremely low!

But (I know that I will sound like Monty Python) if that <5% is in the flavour itself, what are we going to do with it?? Vaping it straight? No we won’t! Are we diluting it? Aaaand, if we dilute the flavour, at what percentage will our final percentage be?? Veeery low!!..Therefore??? She’s a duck!

I know it sounds silly, but clearly it’ll be very low, so the sucralose at that percentage wouldn’t degrade at whatever temperature (unless we are stupid and burn the wick, but in that case we’ll have a nice draw of Acrolein…)

So this is one of the things that from my point of view this study hasn’t even thought about, scientific innit??

But even flavour manufacturer (some of them…) are playing clever…

E.g. my friends at Capella, with their Super Sweet which apparently is made of : Sucralose, Citric Acid, Sodium Citrate, Potassium Sorbate, Sodium Benzoate… If you didn’t now you know… your choice…

But there are people that really care about us, and they make flavours dedicated to vaping not taken only from the food market…
One of them is definitely Flavorah, they made a sweetener that doesn’t contain either Maltodextrin, Fructose or Sucralose, it’s clearly a trade secret and we understand this, but at least is a vape dedicated flavour.

I know that there are quite a few things we could argue about this study, if correct or not, things like adding sodium bicarbonate, and things like that, but the fact is that we (mixers) usually stay away from that stuff!

Unfortunately not good news for non-mixers, but it’s what makes us different from smokers, we have the knowledge and we can make a choice… they don’t or can’t!

Before you posted this, I saw the video where Wayne from DIYorDIE interviewed a chemist to have him “translate” the study results into laymans terms.
From my point of view, it just says how little is actually known and how many proper studies still need to be done.

Exactly what I said, the percentages we use are so low, that, even if you vape the flavour straight from the bottle it’s not a big deal, well over hyped, but still it’s a good thing to know…

I really wish they would start using popular devices like subohm tanks in their tests as well as pod/mtl systems. If you put all the time and effort in testing things, do it properly.
(I don’t mean ‘you’ personally)

I know you don’t…

Found a couple of other papers describing Sucralose decomposition (and by-products) over temperature:

(2009): The first step that occurs between 119 and 137°C, corresponding to a sharp endothermic peak at 132°C in both samples is attributed to the thermal decomposition of the compound with losses of 2 H2O (water of constitution) together with 1 HCl Calcd = 18.10%; TG= 18.0%). The last two steps observed between 160-370°C and 370-550°C, that occur through overlapping ones with total mass loss, corresponding to the exotherm with two peaks at 360°C and 500°C (Sigma) or a single exothermic peak at 360°C (Viafarma), are attributed to the oxidation of the organic matter.

(2013): Sucralose may decompose at high temperatures, and participate in chlorination reactions, generating highly toxic compounds. Here, we demonstrate that heating sucralose at high temperatures in stainless steel or other metal utensils in the presence of rust (Al2O3, Fe2O3, and CuO) produces polychlorinated dibenzo-p-dioxins and dibenzofurans (PCDD/Fs). … Using thermoanalytical techniques, Bannach et al. (2009) found that sucralose is thermally stable at temperatures up to 119 C, but above this temperature, and up to 550 C, thermal decomposition takes place in three steps without the sucralose melting. Rahn & Yaylayan (2010) reported that the thermal degradation of sucralose at 250 C resulted in the generation of toxic chloropropanols. Our previous studies showed that highly toxic polychlorinated aromatic compounds, such as polychlorinated dibenzo-p-dioxins and dibenzofurans (PCDD/Fs), dioxin-like polychlorinated biphenyls, and polychlorinated naphthalenes, could be generated during the heating of foodstuffs in the presence of sucralose. … PCDD/Fs were not detected in the smoke or residues when sucralose was heated in quartz, aluminium, or copper utensils (the metal utensils were polished and rust was removed before use) at temperatures between 200 and 400 C. However, PCDD/Fs were detected in both the smoke and the residues when sucralose was heated at 350 C in stainless steel utensils, and it should be noted that stainless steel is commonly used for cooking utensils.

@Iv3shf I appreciate all of the time you spent gathering all this, posting, linking, and screenshots as well. I don’t know what suc breaks down into, but we may well soon. Thanks again, for putting all of this in one easy to reach spot.