ok, so I have decided that I am going to go full squonk basically, and I have several rta’s that I would be willing to trade for a decent squonk mod. Depending on the squonk mod I would gladly trade multiple tanks for one mod. So here is what I have available and pics are available on request, I have an augvape alleria rta, Black, still has both spare glass and all the o-rings, has only had about 7-8 different builds in it as it was my vaping in public mod (low wattage setups), I have a digiflavor Fuji single coil in silver, it has had 2 builds in it as I got it about a week ago. I have a uwell crown 3 tank, still has all the spare o-rings and glass and I still have the key for the top of the tank. I just won a giveaway for a ghostvape rta single coil, and depending on how the flavor is I will either trade it or one of my boreas tanks, not sure on that yet though. I also have a uwell rafale X rda that I really like but it is not squonk compatible, so I would be willling to part with it as well. Lastly I have a lost vape triade with dna 200, I would only trade it to someone who was interested in the chip because the mod itself is well used, it has been my carry mod for a year and I got it second hand, it was in rough shape when I got it lol. It also does not recognize charged batteries, but I think it’s the wiring in the mod and not the chip as it still reads resistance and allows you to navigate profiles. So there it is that’s my trade post, whatever does not get traded for a squonk mod will be given away, both on here and to some locals. Hit me up if your interested!!
EDIT the triade is gone, the Fuji is gone, and the ghost inhale is staying with me lol

I think it’s great that you are making this move toward squonking, but I would suggest you don’t goive up all your gear. Sometimes a simple Crown III makes life easy and a Triade is certainly worth keeping just given the escribe software you might not have with your squonker. Why not just grab last season’s IJOY CAPO 100W Squonk Kit which is $40.99 at Gearbest.

are looking for regulated or mech squonk

I appreciate your concern, but I’m not getting rid of all my stuff lol I’m keeping my eleaf istick 200tc because it’s Got Arctic Fox and I like having a 3 battery regulated mod around, also keeping my 2 boreas tanks cause I love them and I have several rda’s that can be converted to squonk so I’m keeping them. To be honest though I don’t like having stuff sitting around that I don’t use, I haven’t touched the crown 3 since November, almost 7 months lol. Oh and you should read @Steampugs review on that ijoy.

the triade quit recognizing charged batteries this morning, will edit my main post to reflect that, pretty sure the chip is still good as it turns on and reads ohms but it says 0% on the battery bar and won’t fire an atty and gives the low battery screen

, i dont know much about them o was going to say at eightvape there are some pretty inexpensive setups but i believe those two are part of that inexpensive group

Yeah, I’m just hoping someone would have something like a mech box they would trade for a couple of these rta’s that I just don’t use. I know there are people out there with 17 squonk mods and only use 5 of them lol and I know my tanks aren’t brand new product so I was thinking two or three tanks for a cheaper squonk mod wouldn’t be an unfair trade.

Instead of starting a new thread, what makes a tank a squonking tank? 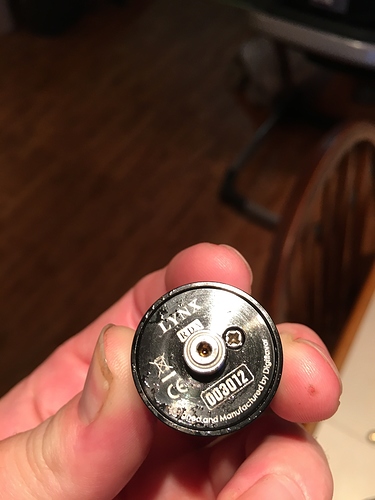 So they’re drippers with an extra hole, got it. Thanks

Yeah lol hole in the 510 pin and hole in the mods 510 too, squeeze the bottle in the mod and it’s like dripping but upside down lol I had almost quit using rda’s till I discovered squonking.

The only squonkable tank at the moment, and its not really a tank, would be the revvo boost by aspire. But without a squonk mod, you aren’t able to use it.

@eStorm thanks for the info, I was entirely to lazy to go and find the name of it.

Yeah Ik lol it was part of a giveaway not that long ago, but still, 1000’s of tanks on the market, 1 that squonks, and it has that weird maze coil thing that I want to try but won’t because you can’t rebuild the shit and if it doesn’t get popular then they quit making them lol. Somebody else said you can put a bf pin in some different rdta’s too, but why? All my squonk rda’s allow the coil to get “painted” from underneath, if your just using the bf bottle to fill a tank it loses most of what makes it good to me, but To each there own lol

Hey @Fishaddict420
Do you still have your Crown 3? I am looking for one, but wanted to see if I can fond a cheaper one here?

Yep, still got it

Please PM if you would sell it. Thanks.

I realize this is older… But I just ran across it.

You might check to see if you’ve got a bad solder joint on the power connection wires (and also where they enter the pcb).!

It’d always be welcome in my graveyard too! Lol

I got a trade for it and forgot to update this thread, thank you though!