I’m using TC for the first time. I figured I would get a premade TC coil to start with so I can take user error out of the equation as much as possible. Not sure if I’m doing this right, or if the coil/mod itself is bunk. For the X Cube 2, here is how it’s setup:

The mod is showing a resistance of 0.31 ohms, but this coil is supposed to be rated 0.15. When I vape, it’s very hot and I get some of that dry hit taste. Coil is plenty saturated. The temp I’m using is 200F which is the lowest. Could the problem be the resistance? My tank/coil was setup at room temp which I read is necessary. Anyone have some suggestions? BTW, the X Cube did ask if this was a new coil, so it did read the resistance from the TC coil.

I’ve read mixed reviews about these Kanger TC coils, so maybe this one is junk… idk. I don’t have another one to try though.

EDIT: Well I reset the coil 3 times and finally got the resistance to be 0.15. Now 200F barely feels like I’m vaping, which I assume is normal. Looks like it’s working fine now. Just wonder why it read the resistance wrong.

Well I reset the coil 3 times and finally got the resistance to be 0.15. Now 200F barely feels like I’m vaping, which I assume is normal. Looks like it’s working fine now. Just wonder why it read the resistance wrong.

I’m glad you got it to read the resistance correctly. I’ve experienced this as well, on my IPV 4S, XCube II and TC40W - not the eVic VT (yet)… Annoying when it doesn’t work.

To put it bluntly… My experience with the Cube 2 has been dramatic. This mod is overly technical. Sure you suppose to be able to dial in any wire for tc which would be good if the mod responds as it should. It’s definately not reading acurately. Here’s a examples… note the resistance. BTW, the cube isn’t suppose to read .05 ohms. 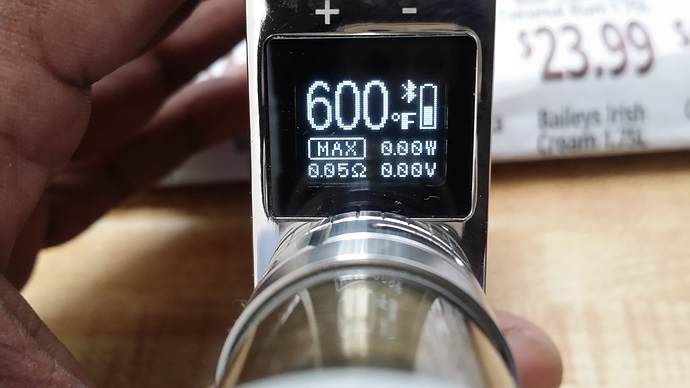 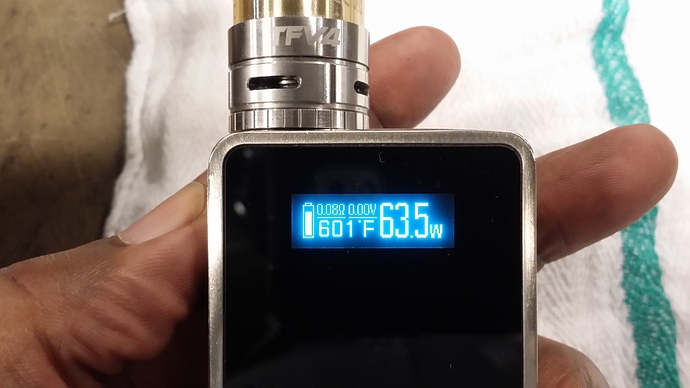 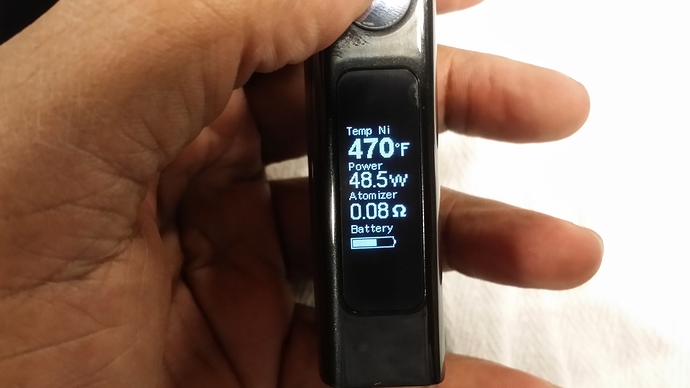 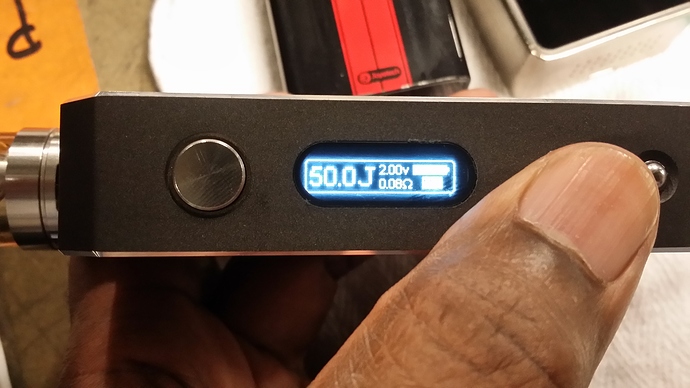 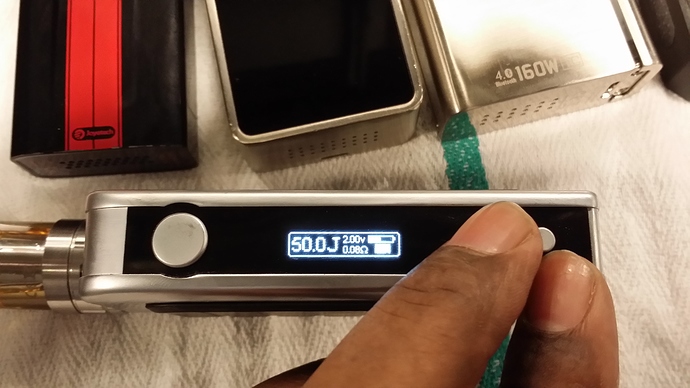 Okay… are all my other mods reading the wrong resistance? But this is just the beginning of my saga as to why I say it’s too technical. The app is a piece of shit. I spent 12hrs trying to get Ti support and another 8 hrs trying to not get dry hits. Supposedly the TCoR for Ti is .00350 if I’m wrong please correct me. If you use a dual Ti coil set up it should be halved… .00175. This setting is dry hit city on the Cube 2 with a dual Ti setup that I am using. On the the second day I through all that I thought was right out of the window and starting using random inputs. I finally reached a point where I could vape with no dry hits and Temp protect didn’t kick in, in .25 seconds. Here is where the Cube 2 works with a dual Ti coil set up. 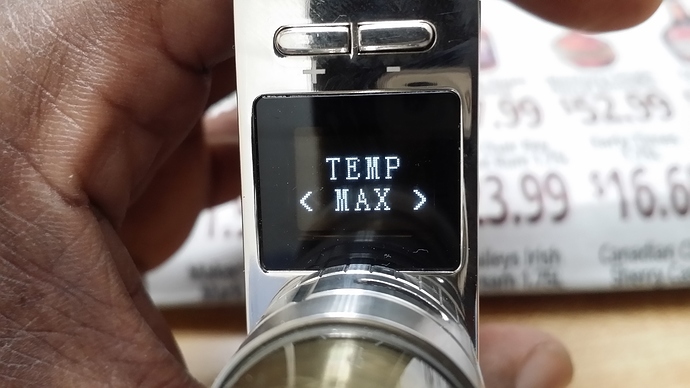 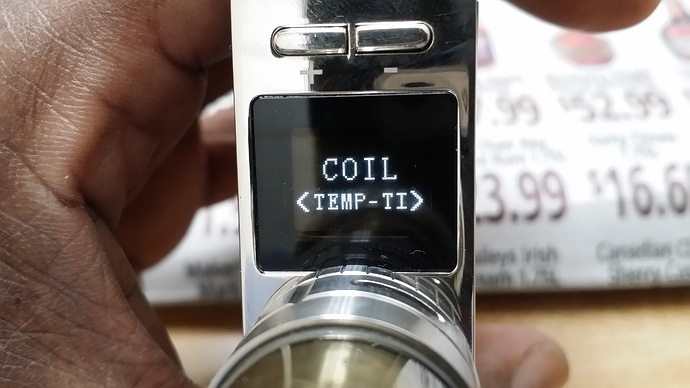 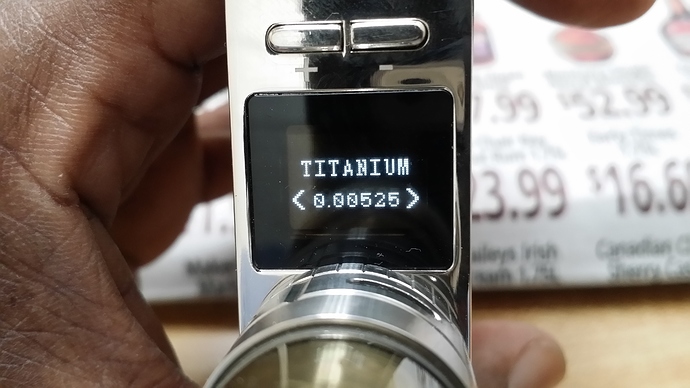 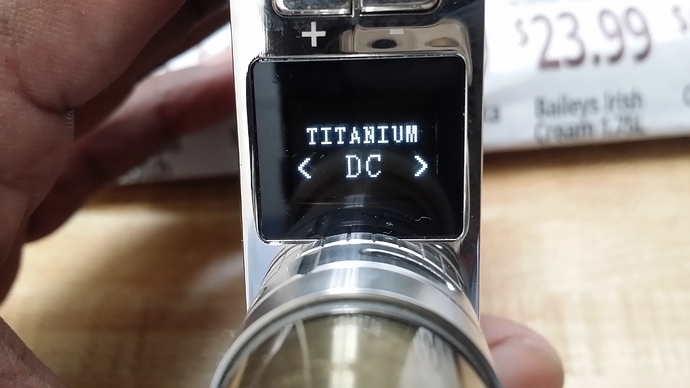 I must admit, it’s vaping beautifully now. It only took 2 days to set it up. If you’re not TC savvy, which I thought I was… stick to singles or try this set up if you don’t have success with duals on your own. Was this a royal PITA? Yes. But the way it’s vaping now… it was worth it.

Don’t get me started on the app. I thought the temp coeff setting was only available in the app. So, I set it up there and enabled TC mode. Soon as I disconnected bluetooth, it reverted back to wattage mode. I’m just glad I noticed before I took a hit. You’re using Android? Apparently the iphone app works flawlessly.

Is there a noticeable taste difference using titanium as opposed to nickel?

Soon as I disconnected bluetooth, it reverted back to wattage mode. I’m just glad I noticed before I took a hit. You’re using Android? Apparently the iphone app works flawlessly.

It’s buggy on android as well. I experienced weirdness as well, when I disconnected - but it seemed to …pass?!

Have you ever used the Adj Ohm setting? I’ve been just manually adjusting the resistance to 0.15 when I plug in my TC coil and it doesn’t read correctly.

The app is a piece of shit

That’s putting it nicely PV! I have never seen a piece of software as F’d up as this is and they really don’t seem to care to correct this. The response I get is it’s my phone and I need to update my phone? I just got an email from them after giving them my thoughts on it and that’s their response…my fault. So the 1000s of other customers that are bitching must have old outdated phones too apparently. I’m not going to go out and buy an iPhone either just for a damn app that is all around pointless to begin with…
@Pro_Vapes did you purchase the Ti support? I’m only curious because supposedly there may be a work around using their update software and code…I have yet to use titanium (I know I know) so I haven’t pursued it further

Got my TI wire in today and I am lost. I got 26g pure titanium wire. The reviews included people mostly who were using it to make coils. I plugged it into Steam Engine and I don’t know what I am aiming for exactly. This is just the start of course, then I have to use it on my Cube II. I have no idea about setting the resistance, coefficient or anything else, I haven’t used the Cube in TC mode at all yet. I have paid the fee to turn it and the TI ability on.
I have read tons of posts and watched youtube videos. If anyone can help me almost on a step by step basis I would be forever grateful. To start I need to figure out how many wraps and what resistance I am even aiming for. Sorry being such a pain but TC and TI has got me on the run…

Like I’ve said before, if Smok’s Japanese cousins were in charge of the app we wouldn’t be having these problems.

TC and TI has got me on the run…

Not directed toward you @Kelleyjo333, I just wanted to make a remark. Ti in TC is not a beast on a simple TC mod. You would build a coil, set your resistance, (easy enough to do) and vape away.

Now what SMOK has done is given the their mod owners full control of the TC process which is complicated for a person that’s not accustomed to operating a TC mod. IMO there should be like a manual and auto mode where the mod would work like a regular TC mod, or you could switch it so the user could input their own settings. This mod is for advanced TC vapers. This is not a beginners mod. So don’t feel bad… you just jumped in the deep end of the pool.

I was regretting buying it shortly after I took it out of the box. I am trying very hard to learn what you guys are nice enough to teach me. I am looking into a simple TC mod, thinking about one of the Sigelei or IPVs…

So I rebuilt the TI on the mutation and did everything like instructed. So I have it set at 530F, thats what it takes to get good vapor. It pulses in and out as it gets to 530 then it will pretty much quit, by the looks of the cotton it is not dry. Is this normal? When it does put vapor out it is great for sure, taste is awesome.

r. It pulses in and out as it gets to 530 then it will pretty much quit,

Turn your TCoR up until it vapes normal. Same problem I was having.

I have done that although I don’t know how far to go either way on the TCoR. I think I may have a wicking issue, I think… When it is totally saturated with juice it works great and when it is not saturated it gets funky, but it’s by no means dry either. I would really like to see how easy this is with a standard TC device. hehe. Also do I have to set the resistance and watts before going into TC mode? I see that in a lot of tutorials but none, except what you have given me, using the Cube. I may post pics later when I get a chance to work on it. Thanks again for all your help

When you attach the rda it should ask if its a new coil… that’s when the resistance is set. Just make sure it’s at room temp when you attach your rda. I very seldom use a dripper. So I’m not sure how much difference it makes. You should build your single TF-R1 RBA head and try the tank and then you will always have a wet wick. Alot of your issues should go away.

Just so you know: If it isn’t, you can set your resistance on the mod: Setting - Adj. ohm

Well thats exactly what I was doing Wednesday, build the coil on the new tank. Well I hit a bump when I couldn’t get one of the screws out that hold the coil. So I am scared I will strip it. I am going to try a few things today to get it out. I believe it was @ringling recommended to heat it up then put it in the freezer so I will give it a go today sometime. Thanks as always!!!