Tease. Before getting pleased

Got some new friends buying vape juice from me. Very much enjoy him and his wife coming over. Even thou by my standards I’m low on premixed flavors . I still have several they enjoy vaping… last night before they left.

After they probably gave me the best complement any mixer could hope to get.

His Wife “ with your stuff I don’t want cigs, still got the pack of cigs we had 2 weeks ago. What I bought in store I still wanted cigs. Store bought had no flavor.

Him “ my cotton so clean when vaping your stuff, with what I get at store it’s usually gunked up after a week”

I decided to give them a peak at what I can make once I place my next order from nic river. And let them try some 0 nic premix I have left over.

Chocolate covered strawberries ( I believe if he touches this one , he might be sleeping on the couch)

Strawberry hubba babba ( he liked this one with 0 nic, but it gets even better with nic. So gave him a taste of my 6 nic bottle so he could see what I meant)

Anyone else out there like teasing their friends and family , with here smell this but ya can’t have any yet ?

Anyone else out there like teasing their friends and family , with here smell this but ya can’t have any yet ?

Haha! Yes! I let a friend try one of my juices while he over picking up his juice order and he loved it and wanted some right away. I told him it needed a minimum of a month to steep (and I was hoarding mine for myself!) and I’d make him some, but wouldn’t let him have it for a month. Thought he was gonna cry… 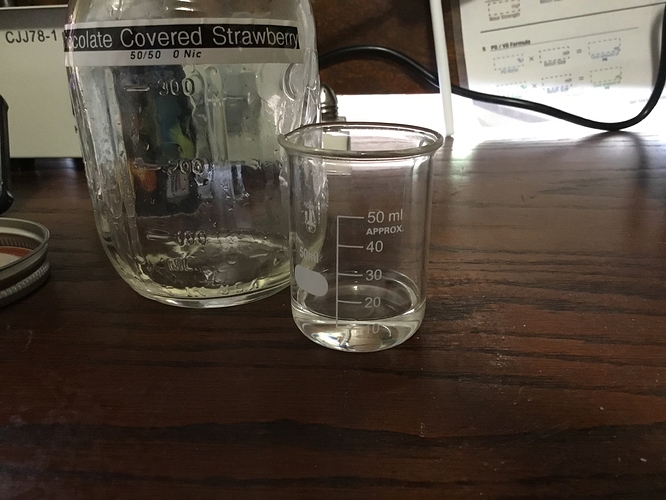 Only 15 ml left for a rainy day. Just enough to mak 20 ml after adding nic and a small amount of vg

for me it worked with :
my gf
two uncles
my gf’s mother
some friends

the good thing is that they started vaping,

Our neighbors. The woman has been off cigarettes for years and vapes 0 nic, but her husband has come over and had me rebuild and wick his tfv8. Problem is that the man seems to have no desire to try to learn to fix his own damn wick, and still smokes. His favorite juice (a cinnamon flavor) has been discontinued and I hinted that I might be able to make some juice, but I cant be rewicking the gear everytime he needs it. The wife uses premade coils and is fine with that, but he uses a juice that shits on a premade coil.

They gave me a Christmas card and I made some 0 nic cinnamon custard SA for his wife cause I have the flavor on hand. It is right up her alley. But I wont attempt to make his juice unless he actually learns to maintain his gear. Lol

Problem is that the man seems to have no desire to try to learn to fix his own damn wick, and still smokes.

pet peeve of mine when a smoker / vaper wants me to help them , dont get me wrong if they are trying to quit oll help as much as possible , but if they smoke and vape they are low on my priority list

they smoke and vape

If they smoke and vape. I usually ask why they are smoking.

Smokers who also vape have taken the first step towards stoping smoking cigs. If they need help with their mods or building coils. I give them help

Show them how to make their coils and then let them do it themselves with me watching. Even had a friend measure and make 240 ml of her own juice.

It is not even the smoking that makes me not want to do it. It is the fact that I showed him what to do and already said that what I was doing was showing him, and that they have internet, and you tube, and helpful forums that were recommended. He is doing the “I don’t know how to look up a you tube video.” thing and I am not having any of it. Anyway, it is not the first time I gave some juice to them, and I don’t mind giving some juice, I am just afraid of becoming a personal coil installer. Lol

And he REALLY needs to quit for his health. His CDL was pulled because of health but you couldn’t tell by looking at him. He has potential to get healthier for sure.

Here’s how I showed my friend

Then once I did all that I took it all apart threw it away and said now you do it.

Edit: this is how the vape shop showed me

I am going to do just that because I really would like to see him quit, and so will his wife who has to smell the cigarettes, and witness his health decline.

My vape shop explained to me, while showing a video, and I installed coils and cotton. They claimed they couldn’t do it for me because of law. But I didn’t ask them to do it, I just asked them to show me so I wouldn’t do it wrong and short or hurt myself.
I wanted to do it all by myself. Waaaaa!

It will take several times doing this with him , but eventually he will get the hang of it… to be honest after a few failed attempts I ended up making the coils for him . But he installs them and test fires them and does his own cotton.

Anyway, I will look at some atomic hot cinnamon recipes to see if I can make his juice. Problem is that I would never vape that flavor.

When he came over for help the first time and I tried to vape his mod. OMG it was bad and even I choked. It was like burnt atomic fireball covered in charcoal. He is gonna need an RDA for that anyway cause I think the juice will end up killing the tank, rba or not.

But if that is the flavor that will keep him from smoking. Or maybe a Mountain Dew flavor. IDK. He has his work cut out for him.

More to the point: My husband’s juice is steeping, I gave him a taste of it and he wants it, but I said let it steep so it gets better.
He vapes only custard and doesn’t like to wait.

Looked up these recipes for my sister in Carolina

Not made them yet .

Bugger, unfortunately it sounds like you’re fighting a losing battle. Sadly, he will probably never convert to vaping because he’s simply not ready. When I hear so many excuses for not getting the hang of it, I just hear “smoking is easier and better”.

My brother in law is a perfect example of it. He proclaimed that he was 100% ready to quit. I gave him a lot of gear and guidance. He kept coming up with reason after reason for not switching… the gear leaks, the batteries don’t last, it’s bulky, hurts his throat, messy, too expensive, on and on. Every dodge and copout in the book. What he was really saying was he wasn’t ready. He’s already been warned about health issues directly related to his smoking, but ignores it.

Hope it’s not the same with your little project, but anyone who finds justification to accept the health risks is just not ready yet.

Have more patience.
If your brother in law says he wants to quit. Have patience.

Hurts his throat - pg/vg ratio or maybe to much nic. Or maybe try NIC Salts

If he says he want to quit and is trying then have patience. And listen to his complaints.

No, he’s made his decision. He found excuses for every cessation method to fail him. He’s past help until he is mentally prepared. I can’t help someone unwilling to help himself. He’s simply not mentally in a place where he comprehends how dangerous smoking is to his future. I’ve been pushing him to vaping so long, he’s now mad just hearing about it. No worries, can’t win them all.

I’ve lost a lot of gear and time on him. Moved on. He has a lot of people telling him he needs to quit. Just missing the one voice he needs to hear- his own.

I have been there myself, but that is like 5 years ago and I only tried a couple setups at that point. The pg heavy juices itched my throat and made me cough which also scared me. I was afraid of heating metal, rubber, and plastic as well as the pg. So I jist stayed smoking. Husband got me that alien kit and it just clicked with me AFTER I had quit cold turkey. I wasnt ready to quit, nor did I really want to even after losing my mom and best friend to lung cancer, it was my husband’s health decline, coughing all night and snoring so bad he stopped breathing. The doctors discovered the spots on his lungs and I just couldn’t smoke if he was quitting too.

The physical, and psychological withdrawal was still hitting me after months cigarette free, I would have a cigar once a week or so. But subohming changed that. I was no longer afraid of the vape even if I was vaping even bigger than those scary little tootlepuffers. I stuck with it, researched and read up a storm, and went foruming. Now I know that cigarettes are far worse and now taste like shit in comparison.

How many bad things have to happen for someone to quit? IDK, but even caring for 2 beloved family members with lung cancer didnt do it for me. It actually was the threat of another person dying and the right vape that worked. I would still smoke if not for that alien kit, I am positive of that.

Hey, I totally get it. Discovering vaping was a complete accident for me. I was entrenched in smoking and not looking very hard for a way out. Vaping was a matter of convenience when I found it, long story for another time.

It is his right to choose, and I will never interfere with that of course. I was just a bit put-off by all the obviously lame excuses that told me ultimately that he was just happy smoking, and still is. He will not even speak about vaping or smoking or any of that. I gave him a Supreme, a Nautilus, a Zephryus, a Triton, as well as about three mods. I really can’t remember it all. Meh.

Show em the tip, ask them to have a little suck, do they like the taste? Got em!