I figured I would start a DNA 200 thred for those that may be interested. I’ll be starting my DNA 200 adventure in a couple days and I have a lot to learn. Anyone with any info please contribute. Setting up the Crown Tank with SS for a DNA 200 MOD…
http://evolvapor.forumchitchat.com/post/uwell-crown-tank-stainless-coil-tcmode-7610469

What kind of Dna 200 did you get? I am really interested in them but don’t like the built in battery at all. They seem pretty complicated as well but you can sure do a lot with it and make a ton of modifications with the software. I’d really like to try a 133 watt dual 18650 version. I’ve been on cloudmaker’s site and looked at their mod. It looks pretty awesome! Do you have or have you tried a 150 watt sx 350? I looked at the sx mini when it came out but with one battery i’d be switching every hour or 2. The 150 watt version looks pretty awesome but the only mods I know about are the boxer, cloudmaker and custom/diy. I’m from Canada and I’d have to order from the states. With the exchange rate and shipping I’d have to sell one of my wife’s kids to pay for it!

I have the Hcigar VT200. They are complicated, but once you get it figured out they seem to blow the others away. Some do have removable batteries. I can swap my battery out. It’s not very simple but I can. You should research it well before you try one to make sure it’s right for you. Unlike some TCMs out there, this one works as advertised. This is the 1st DNA 200 that I’ve purchased and I’m taking my time making sure I do things the right way. Good luck if you decide to try one.

I will be jumping on the dna 200 band waggon as soon as funds allow. But following this link with interest in the mean time.

It looks like the Danish group by I am participating in will succeed. I’ve collected 30 people who want a Wismec Reuleaux

That’s the one I want as well. Two days on a single charge you think? I’ve not seen a review about this but imagine it would be something like that.

On a side note - I look at all the info I can find on this chip and I will be chuckling like a mofo when I see the same folks who thought the xCube was complicated working with the EScribe software. Screw that! I’m laughing now!

You’ll figure it out… Then it’s all bliss.

You’ll figure it out

I have no doubt.

I found a friendly and very helpful FB group. They remind me of home, (ELR Forum). Once you crossover and in a jam they will jump right in and help you out.

I was looking at that one last night. It looks pretty awesome. Love the triple 18650. Could only find preorders for it that would maybe ship middle of December. I guess it could be a Christmas present if it came in time.

I’ve been working on some custom themes. These will be my welcome screens…

My first theme is done…

30 people who want a Wismec Reuleaux 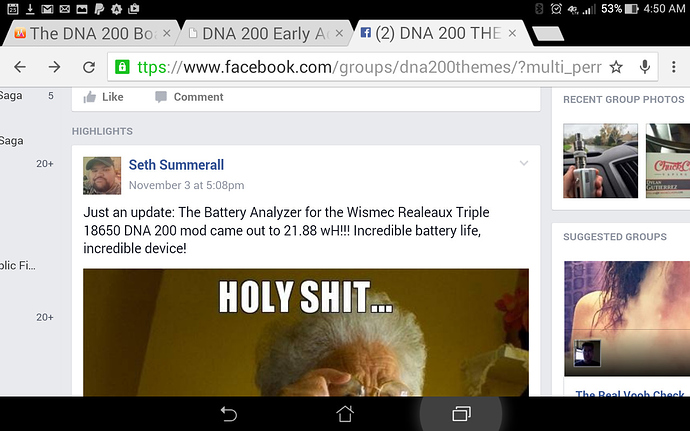 I made a few. They look good on the mod too

Plus one for hcigar vt200! Excellent performance and loads to tinker with in evolve. Stellar mod! Highly recommended.