I am creating this thread in an attempt to help nail down for myself and others, exactly what flavor muting is like.

For me, sometimes a flavor will come off as really good tasting but then within the hour, sometimes even close to a quarter of that, the flavor will be gone completely in taste.

Other times when I cannot get any flavor from something, it is another sign of muting; one that is a step higher than simply using a flavor at slightly too high, but WAY too high.

Another thing I have noticed, is that if a flavor comes off as harsh, it is most likely being used at too high a %. This is not always the case however, as some flavors are just harsh to some people’s palates (an example of this is Yellow Peach CAP; I love this flavor and have used all sorts of %'s, but GOD ALMIGHTY is it harsh!).

What are other symptoms of flavor muting or using a flavor at too high a %?

That is one great avatar.

There are tons of things that cause flavor muting. Sometime it’s a subtle change over time and with others it’s all at once. It really all depends.

Most times for me it’s with my device (cotton, coil gunk, battery, bad connections). Other times it’s flavor related. Not all flavors play well together.

I recently experienced this myself. It’s really a trial and error thing and learning what and how some flavors work together. Sometimes flavors just suck and wasn’t properly created And the worst of all for me is some flavors my palate just don’t detect.

I find flavor concentration to be very important because my palate is very weak when it comes to subtle flavor detection. Highly concentrated flavors just last longer and usually hold up better over time for me.

to me flavor muting is what you said in the begining of your write up a flavor that fades , ime using something at too high of a percent you just dont get the taste that it should be or any taste at all , i believe the muting comes from a manufacturer using EM as RFSC flaves have ive read on that thread a few times walt say they added EM that alone will mute flavors over time then there is flavors with no flavor carrier like pg or very little this is usually a extract type flave which seem to mute over time more so then say FA then you have fruit type flaves that are made up of smaller moleculea that escape quicker when bottles are opened so imagine mixing a on a magnetic mixer a fruit mix without covering the top of your beaker or flask there goes a lot of molecules , and heat boy there are alot of people who just want to heat things up add all those things up while making a juice and id say in a few day let alone a month flavors are going to fade ( mute ) the nice thing about using to high of a percentage you know pretty quick when doing SF test and can adjust pretty quick

@Pro_Vapes am i your shadow 2nite or what everything you comment on i. next like im stalking you lol i swear im not

Is it all flavors or just a select few that seem muted? I’ve been messing around with cola, trying to make a Jim Beam & Coke recipe and it seems that with almost all the single flavor cola testers I’ve done I get 4 or 5 hits before the cola flavor disappears. The only exception is LB Cola Freeze which seems to hold flavor longer. If I vape something else and then go back to the cola, the taste is there for another 4-5 hits. I thought it was because my brain blanks out cola flavor quickly so I gave some testers to my son and he gets the same result. Are we both genetically predisposed to blanking out cola flavor?

Probably not, you just have to tinker with %'s. Muting is still something even the pros do not understand fully. I doubt many out there realize they are doing it to themselves. This is why you see a lot of recipes with 20% flavoring but I don’t know how they vape it and think it tastes good.

Keep turning it down and see if it happens; what is the % for the flavor that is muting?

This is why you see a lot of recipes with 20% flavoring but I don’t know how they vape it and think it tastes good.

because each person is differnt and each flavor is different , ive had many recipes at that percent that are good , and many lower than 10 percent that are great , take @Alisa cereal vape is freaking awesome and its up there in total flavor percentage , the thing is we all taste things differently

I doubt many out there realize they are doing it to themselves.

please give example that would be great 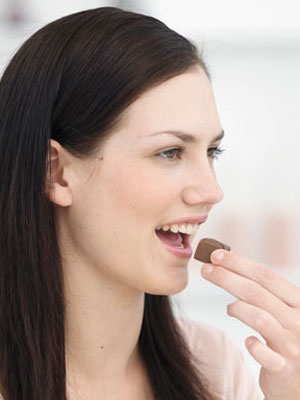 7 Things You Didn't Know About Your Taste Buds

Find out why sweet foods are so appealing, plus other interesting flavor facts

here is some interesting things some may not know , and there are many more things that one should research if your really trying to figure out whats what

what is the % for the flavor that is muting?

I tried LB Cola Freeze and FW Cola at 8%, FA Cola at 4% which is the median single flavor percent for all of them. I’ll try dropping them down, Thanks!

Let me rephrase that, this is why you see a lot of recipes with OVER 20% flavoring.

Yes, there are always the outliers, I am referencing the vast majority of recipes that are using 20% or more flavoring.

20% is not that much if there are a myriad of flavors, but if it is a two or three flavor recipe that is reaching 20%, it is more likely that it is muting.

but if it is a two or three flavor recipe that is reaching 20%, it is more likely that it is muting.

I have abandoned using recommended flavor % because those numbers are skewed. You may notice the high ranges are sometimes 40 to 100%. Unless the top and bottom 20% are tossed out then averaged you cannot get a true reading.

High % are most likely from a flavor stone.

Yes indeed. Regardless the numbers are skewed and its best to develop your own SF testing considering this!

It can be very confusing when viewing all the %s. That’s where common sense comes in to play.

Because sometimes I don’t test individual flavors, I look at the Median % paired with notes and some recipes to determine a starting point. More often than not it works for me. 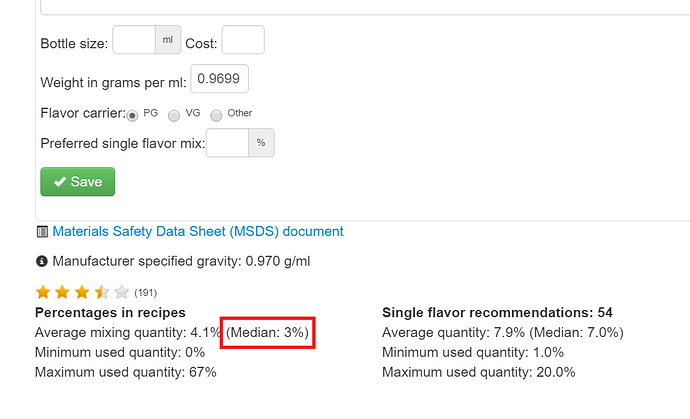 Bingo, this is EXACTLY how I go about it as well.

@woftam
Flavor stone?
After a quick google, all I come up with is kitchenware, LOL. Care to enlighten me?

this is just an example

Flavour stone , flavour base, one shot - loads of different names but basically if you have something you mix often it is a good idea to mix all the flavours together so you just have to add nic and vp/pg. If you click on the blue wrench you will see “make one shot concentrate” it is common for people to make a one shot of say a cheescake or milkshake base and use that as a flavouring in other mixes

Here is an example of one of @Pro_Vapes bases

Remember to rate it at e-liquid-recipes.com!
4 Likes
next page →