There's a new sweetener out there!

http://forum.e-liquid-recipes.com/users/PiMpDaDdY is the creator and it’s an incredible sweetener with no aftertaste.

For all you challenged decoders, beat cha:

From our very own Rick Laporte, a PimpDaddy Original....SUGAR DADDY! A new strong sweetener with the true taste of sugar. No chemical aftertaste and significantly less coil gunkage. Don't be forced to decide between your sweet tooth and your coils...

LOL I just had a chance to try it

The ingredients of it are not listed anywhere, what’s it made of?
How does it compare to Pyure Stevia?

The ingredients of it are not listed anywhere,

that is something i think should be known , not the recipe but at least the composition

Yep I’d love to know what’s in it too.

Agreed but it seems to make all the mixes containing it 5 stars so it must be good stuff!

Well not all, only about half… Lmao

i hope it is , i just mixed Erythritol and LS Pyure 80/20 because some mixes need a bit of sweetness and its not too bad the Erythritol toned down the bitter after taste of the pyure but to find something like sugar would be greeeat, i just wont use it unless i know what it is

It is not like the guy invented a new molecule, he is using something that is already in existence. So by providing the composition, it would pretty much be giving away the secret recipe/ ingredient. Unfortunate, but unless someone like the FDA steps in, it is his call to make on what information he provides.

I am sure he is not the first to utilize it, there are probably other companies that have been using it, even if it is not his version/ production of the ingredient into a ‘sweetener’.

We already know of agave, sucralose, EM, erythritol, stevia, and ??? What other sweeteners are there? I can tell you it is probably not dextrose; I tried that and it did NOT work.

But I am curious about it, I had contacted them asking when they put it out as I am always on the prowl for a new sweetener. Might get some just to try it out.

I have no idea what he used all I know is it works. He sent this to me to test out and I’ve just gotten around to mixing with it.

Sorry you lost me on the lingo SF

I was referring to this

0.80% SugarDaddy Sweetener * Sometimes you just want to vape sweet cotton candy and thanks to a new sweetener you can do that with no aftertaste. This is sweet cotton candy straight from the fair and I made it for one of the Crimson Girls who wanted...

Just purchased some but trying to figure out how to get the payment to go through. What the hell is e-transfer?

Wut we need is a bottle of this miracle sauce and a free chem mapping lol. I agree that this is most certainly something already in existence and being that it can mimic cotton candy its most likely got a small amount of EM

Well I hope it’s not this… 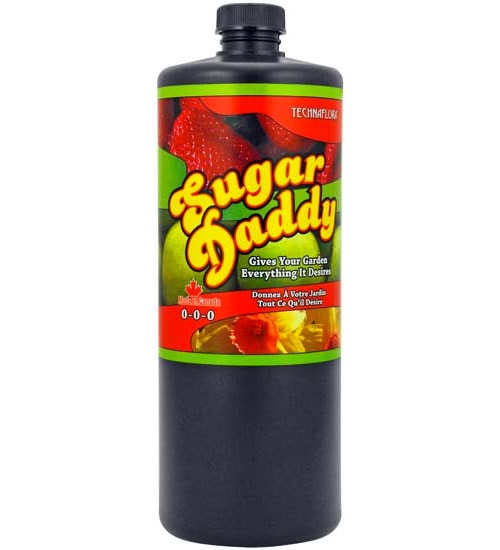 Gives your garden everything it desires! Technaflora Sugar Daddy supplies essential carbohydrates and all twenty amino acids in a rapidly available form.

Maybe he is utilising Molasses…